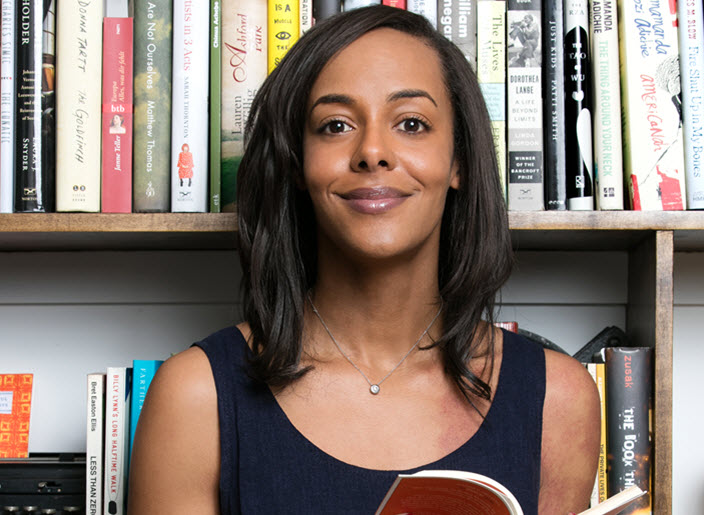 Looking ahead to Wednesday’s 70th annual National Book Awards, the foundation’s executive director Lisa Lucas talks about the program’s unique way of charting a culture’s decades. ‘We believe in it.’

‘Making Sure That We Are Unshakable’

“Everything is an experiment, you know,” she says in an interview with Publishing Perspectives from her office. “We obviously believed in translated literature and we believed in it enough to establish a prize after so long [more than 20 years] without adding new ones. But the reception was just really exciting.”

As our readers will remember, this fifth category was added only last year, a move cheered by the world publishing industry, which had appreciated the Booker International Prize for honoring both authors and translators. The National Book Award in Translated Literature is devised as is the Booker International, to split its monetary award (US$10,000) between the winning translator and author.

And the new award is off to an auspicious start. Last year’s inaugural winner of the prize was Yoko Tawada for The Emissary, translated by Margaret Mitsutani (New Directions Publishing, 2018), a book named on Library Journal’s Best Books of 2018 list. And the category’s finalists last year included Flights (Riverhead, 2018) translated by Jennifer Croft, while this year’s longlist featured Drive Your Plow Over the Bones of the Dead (Riverhead, 2019) translated by Antonia Lloyd-Jones. Both are by Polish author Olga Tokarczuk, winner of the 2018 Nobel Prize in Literature.

In announcing the creation of the award last year, Lucas spoke with the serious intent—and social relevance—that characterizes the National Book Foundation’s programming. “We are a nation of immigrants,” she said, “and we should never stop seeking connection and insight from the myriad cultures that consistently influence and inspire us.”

With that line, she’d captured with typical eloquence the unease felt by many publishing professionals in the country and the world, as nationalism, xenophobia, and repression have emerged from the shadows during the Trump administration, the Brexit negotiations, the escalating Hong Kong riots and more. As Coffee House Press’ Mandy Medley told Chad Post for an article at Publishers Weekly, “Since the 2016 election, American readers have started looking beyond the traditional—white—American canon to international literature, not just for new perspectives and ideas but for great storytelling.”

Now assured of the success of that “experiment” in creating the Translated Literature award, Lucas says, “Everyone who publishes translation really came through last year. We got what we expected” in terms of submission levels, “given what the market is.” And this year, a cohort of 145 titles were submitted in the category. For comparison, 325 were submitted in the Young People’s Literature category; 600 in nonfiction; 397 in fiction; and 245 in poetry.

The Translated Literature award “over time will encourage publishers to think about the role they can play in bringing work from around the world to American audiences.”Lisa Lucas, National Book Foundation

The introduction of the Translated Literature award, in fact, was driven, she says, in part by the realization that the foundation could offer international work a spotlight unparalleled in US literary life. “This was designed,” she says, “to say, ‘This is something that has the opportunity to get  one of the biggest platforms in literature. And I think that over time, that will encourage publishers to think about the role they can play in bringing work from around the world to American audiences. There’s an appetite and interest,” she says, “whether it’s critically, whether it’s at a bookstore, or whether it’s on the prize circuit. This is something people are asking for.”

When the 2019 Booker International Prize went to the Omani author Jokha Alharthi for Celestial Bodies (Sandstone Press, 2018) in its translation by Marilyn Booth, the Booker reported a 30-fold increase in sales in the week after the prize’s announcement.

Understandably, Lucas wants to hold off on trying to assess what sales impact might be felt from such a new award in the States, but any caution in making such estimates shouldn’t be confused with a lack of commitment, she says. “I think that the work is really going to be not just in producing the prize. We’ll keep doing it. We believe in it. It’s valuable to us. And we’ll make all the noise we possibly can from our little nine-person office.”

It’s the noise that counts. The ultimate success of the Translated Literature category, she points out, has to do with an alignment with the work of translation specialists such as Ottaway winner Post of Open Letter Books and Three Percent, and organizations such as Words Without Borders and the American Literary Translators Association.

Longlists and the Long View

In talking with Lucas about the National Book Awards program as a whole, you realize that the seven decades of the foundation’s work now is becoming instructive for the simple fact of longevity, perseverance—sticking it out.

A National Book Award-winning title “may not sell a billion copies, but it’s definitely going to be a book that’s read, that’s noticed, and that has an opportunity to shine.”Lisa Lucas, National Book Foundation

There are what she calls “thunderclap books,” the blockbusters that capture the market’s fancy. But those, of course, aren’t the norm. And what impresses her now, she says, is a certain give and take between marketplace relevance and literary excellence, a dynamic that can give the National Book Awards their own, growing power.

“I think a prize gets stronger,” she says. “Now, I don’t think that we’re in the business of making sure that we’re only identifying cultural juggernauts. But when you look at the long arc of any prize, you do see, that Tinkers moment for the Pulitzer, right?”

Paul Harding’s Tinkers (Bellevue Literary Press, 2009), when given the 2010 Pulitzer Prize in Fiction, caught many off-guard. It was a relatively little-known work from a small independent house, and the book had been buoyed to national attention by adamant support from independent booksellers and readers.

“Everybody was, like, ‘What is that curious book?'” Lucas says, “And then they loved it and it just took off. A little indie press having a crazy moment then became part of the story of the Pulitzer. Part of building up the power of a prize is the fact that a quiet book can have so much impact. And because we’re 70 years old, even if something is a quiet book, whatever wins the National Book Award is not going to land softly now.

“It may not sell a billion copies, but it’s definitely going to be a book that’s read, that’s noticed, and that has an opportunity to shine.”

Lucas is also watching the current market strength of nonfiction with interest. Having co-chaired the nonfiction planning committee of the Brooklyn Book Festival for four years prior to her move in 2016 to the National Book Foundation, she says she’s not surprised at how, once someone tries a good biography, for example, “People sort of catch on that it’s not just a Father’s Day book.

“And I think people are so curious now about what’s happening in the world. I think this is the first time in my life that I’ve shared with so many people that desire to understand how we got here” in society today. “It doesn’t matter which side of the divide you’re on right now. What’s going on underneath the surface of social interactions, on the social justice front, the political landscape, the climate, you name it.

“We want to understand what’s happening today. And people aren’t only looking to get into instructional titles or tell-alls coming out of the West Wing. People are also comprehensively looking to hear other people’s thoughts and feelings around the moment that we live in now.

“I think they’re also increasingly interested in past. We have to look backward to understand the present and imagine the future.”

Anyone who has watched the National Book Awards program over the years is aware of the seriousness of its intent.

Reflected in everything Lucas says in a conversation with her is a sense of purpose—of raising the visibility of good work through that accrued power of the award she’s talking about. And, needless to say, there will always be some who read into various jury panels’ selections one agenda or another. In fact, what Lucas describes is one single agenda: the responsibility to authentically important work, reflective of the culture and its era.

The National Book Awards “say something about the times we live in. And I think that that’s one of the most beautiful things about being an institution with seven decades of history.”Lisa Lucas, National Book Foundation

It becomes evident that she’s given this a lot of thought and is clear on both the place and the potential of the program, after 70 years. The awards stand in the American experience—and most recently the international arena—capturing the reading and publishing moment.

“There’s no way to divorce the world we live in now from the books that are being published,” Lucas says. “And I don’t think that we do a very specific job of saying, ‘We want to have socially aware books.’ That’s not part of our mission. That’s not something we instruct the jurors on.

“But these people on our juries are thinkers and writers and readers and booksellers and citizens of the world. And I think that every decade, if you look at the books” that were part of a program of this kind, “it tells you something about the time in which those books were being read.

“This is a moment, when you look at this decade, if you look at 2010 through now, it’s a moment that’s going to say something about the times we live in. And I think that that’s one of the most beautiful things about being an institution with seven decades of history.

“Not only can you measure a year,” Lucas says, “but you can measure a decade. You can measure it all. This is important, what we’re doing. It’s all about people. It’s about the world that we live in—and how we did.”

She says she’d love to see the foundation find the funding and resources, perhaps by its 75th anniversary, to create a timeline to plot the awards’ history against the times in which each year’s and each decade’s literature was being read and awarded. When she thinks about her own four years with the foundation so far, she knows what she wants for the awards.

“Whenever the time comes for me to go,” Lisa Lucas says about the National Book Awards program, “the thing I want most to leave behind is as much of a shot as possible at lasting as long as it can. Anchoring it. Making sure that we are unshakable.”

More from Publishing Perspectives on the National Book Awards is here, and on awards programs in general is here. More of our extensive coverage of translation is here.