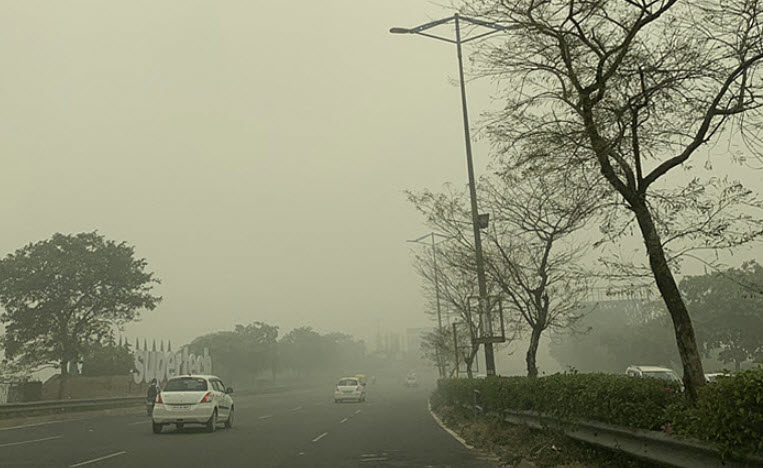 Siddharth Singh, the author of ‘The Great Smog of India,’ speaks with Copyright Clearance Center’s ‘Beyond the Book’ podcast about the and dangers of New Delhi’s smog. 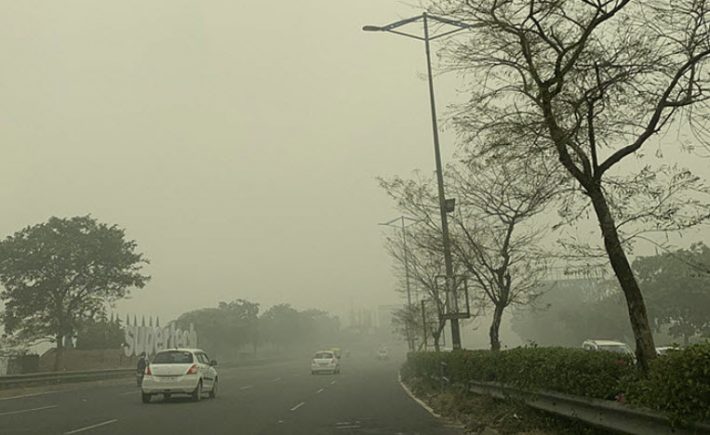 This photo of New Delhi smog taken in the week of November 4 has been unaltered for color or tone. Image: Siddarth Singh

‘The Silence of a Crisis’

Iin an interview released today (November 18) on  Copyright Clearance Center’s (CCC) podcast series Beyond the Book, Indian energy specialist and author Siddharth Singh talks of how his own respiratory challenges in New Delhi led him to write The Great Smog of India (2018, Penguin Random House India). It focuses on an annual air-pollution phenomenon that occurs in the Indian capital each October and November.

While the underlying issue is India’s dependency on burning coal for energy production, factors as unexpected as Diwali fireworks and farm “stubble” burning in the northwestern states of Punjab and Haryana are contributing.

And Singh—a consultant with the International Energy Agency (which does not include India in its 30 member countries)—is especially good at pointing out ironies in which positive social efforts have led to serious parts of the amalgam of problems colliding what he calls in his book “the silence of a crisis.” 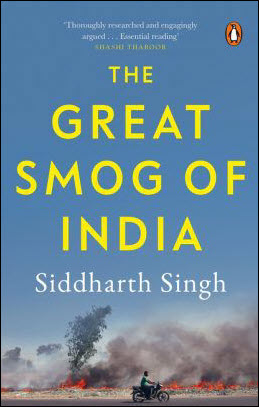 For example, he says to Beyond the Book host Christopher Kenneally, “It may seem like burning agricultural residue is a practice that has been going around for hundreds of years, but that’s not the case. It’s only a story that started about a few decades ago—a handful of decades, perhaps less than four or five decades. This happened primarily because of India’s own need to be secure when it comes to its food supply.

“We had a situation until the 1970s when India used to rely on food aid. Now, India’s a food-surplus country.” But, as it turns out, one result of the country’s success in food security is agricultural practices that contribute to as many as 1 million deaths from smog-related ailments annually.

Statistics aren’t hard to come by. For the United States’ National Public Radio, Sushmita Pathak reported Friday (November 15) that, “According to a study by the Kolkata-based Chittaranjan National Cancer Institute and the World Health Organization, nearly half of Delhi’s kids already have irreversible lung damage.”

That report was triggered by outrage that a Children’s Day ‘fun run” was held on Thursday (November 14) in the smog–even as schools were closed because of the pollution.

Whoever organised this run should be identified and held accountable for putting children at serious health risk. pic.twitter.com/LmxoiAUprr

And a November 4 article from Swati Gupta and Sugam Pokharel at CNN’s New Delhi bureau reports AQI (air quality index) readings above 800, the highest seen in years, as the government announces even-odd automobile rotations to try to cut back on road traffic pollution and flights are delayed or diverted from Indira Gandhi International Airport because of low visibility.

Some reports indicate that AQI readings in Delhi have approached 900 in recent weeks. At AirNow.gov, an explication of the AQI rankings puts the highest, most alarming levels at between 301 and 500. That indicates that what New Delhi’s people are facing is, at best, four times what’s considered unhealthy.

In his book, Singh brings together much of the available science on the crisis, writing, “A study published in January 2018, led by [the] Indian Institute of Technology (IIT) Bombay, the Health Effects Institute, and the Institute for Health Metrics and Evaluation, revealed that high air pollution levels have contributed to more than 10 percent of all Indian deaths each year. According to the study, air pollution contributed to nearly 1.1 million deaths in 2015, of which 75 percent were in rural areas.” 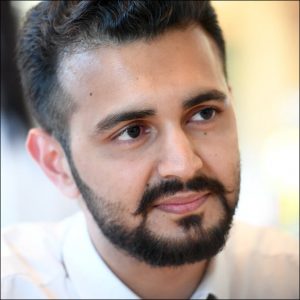 One of the biggest problems is the smallest particulate. The air pollutant called PM 2.5—described by Singh as being only one-20th the width of a human hair—is called out by a report from The Lancet covered by Kendra Pierre-Louis at The New York Times on Wednesday (November 13).

“The burning of fossil fuels such as coal and gas,” Pierre-Louis writes, “also releases a type of fine air pollution called PM 2.5 that can damage the heart and lungs when inhaled. Exposure to PM 2.5 air pollution is correlated with health problems such as low birth weight and chronic respiratory diseases like asthma.”

And a key warning of The Lancet’s report is that there’s been a 77-percent jump in the number of people exposed to wildfire smoke worldwide since around 2015. “Much of that growth,” Pierre-Louis writes, “has been in India and China,” even as the California wildfire seasons intensify.

And again, as Singh talks with Kenneally—CCC’s director of content marketing—you hear the social ironies of the issue that make it seem as impenetrable as the effluvium in Delhi.

“What we really need is a Paris agreement, but for air pollution in India.”Siddharth Singh, on Beyond the Book

“In the year 2000,” Singh says, when India’s supreme court declared “that some of the polluting industries will have to move out of Delhi into less-polluted, non-residential areas, it led to riots. The labor class, the workers of these particular industries who went onto the streets.

“Obviously they were egged on by the owners of these industries. But eventually there was violence, because people did not want these polluting industries to leave their own neighborhoods. While air pollution may have been bad, the loss of jobs, the loss of their livelihoods, was even worse.”

And Singh tells Kenneally that the biggest hurdle may be bringing together the country’s local jurisdictions and agencies. Even those that are having good results from responsive programs exist in a vast patchwork across the second most populous nation in the world.

“What we really need is a Paris agreement, but for air pollution in India,” Siddharth Singh says. “That is the challenge that politics of the country faces.”

More from Publishing Perspectives on publishing and the climate crisis and environmental issues is here, more from us on India is here, and more on Copyright Clearance Center is here.