Four days after she was named in Stockholm by the Nobel Academy, Olga Tokarczuk is a surprise add to the Frankfurt Book Fair’s press conference.

The acclaimed Polish author Olga Tokarczuk was named winner of the 2018 Nobel Prize in Literature (the announcement delayed by last year’s Nobel scandals), and Tokarczuk his morning (October 14) has been added to the opening press conference at Frankfurter Buchmesse, which is set for Tuesday in the Agora’s Frankfurt Pavilion.

This is the same event, as we’ve reported, that will also feature Francis Gurry, director general of the World Intellectual Property Organization in Geneva, WIPO.

Also on hand will be Juergen Boos, president and CEO of Frankfurter Buchmesse, and Heinrich Riethmüller, chairman of the Börsenverein des Deutschen Buchhandels—Germany’s publishers and booksellers association.

The event will be held in German, English and Polish, and simultaneous translation will be provided and attendance is limited to accredited members of the various news media who are registered to cover.

Tokarczuk has seen a wave of literary recognition in the past year. She won the 2018 Man Booker International Prize for Flights (UK) in its English translation by Jennifer Croft and published by Fitzcarraldo Editions. She also was the 2018 laureate of the Jan Michalski Prize (Switzerland), and she made the longlist for this year’s US National Book Award longlist for its Translated Literature award for her Drive Your Plow Over the Bones of the Dead in its English translation by Antonia Lloyd-Jones and published by Riverhead Books. 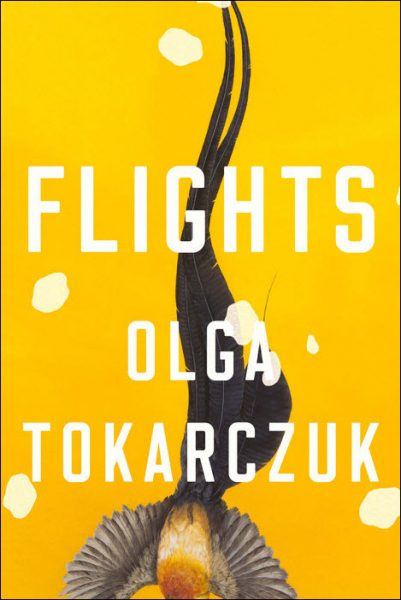 The 56-year-old Tokarczuk is a native of Sulechow, and was the 2015 winner of the Brueckepreis, as well as a laureate of Warsaw’s highest literary honor, the Nike in 2009 for Flights. She co-hosts a small literary festival near her home in Lower Silesia in southern Poland.

The statement of rationale for her achievement of the Nobel reads, “For a narrative imagination that with encyclopedic passion represents the crossing of boundaries as a form of life.”

Tokarczuk now is one of only 15 women to win the Nobel Prize in Literature, of a total 116 laureates of the honor.

You can see the presentation made of the 2018 asnd 2019 last week, on Thursday (October 10) in Stockholm in the Nobel Academy video embedded below. The 2019 Noble went to Austrian Peter Handke—as we have reported, an announcement that has been met with controversy.

More from Publishing Perspectives on Olga Tokarczuk is here, more on publishing and book awards in general is here, and more from us on Frankfurter Buchmesse is here.