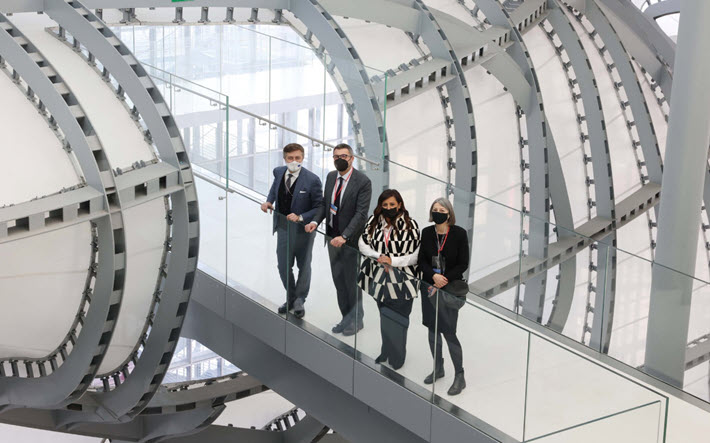 The president of the International Publishers Association, Bodour Al Qasimi, caps a year of travel for international publishers’ meetings with a call for protection of the freedom to publish.

Al Qasimi: ‘A Mission to Accomplish’

No one who has watched the International Publishers Association (IPA) president Bodour Al Qasimi this year will be surprised to learn that she’s hardly coasting slowly toward the end of the first year of her term in office.

Taking the second year of the coronavirus COVID-19 pandemic as her cue to reach out to member-associations of the IPA’s 71-nation network, Al Qasimi has traveled for meetings and work sessions in Spain, Saudi Arabia, Russia, Turkey, Egypt, Kenya, Ivory Coast, Ghana, Georgia and her native United Arab Emirates.

Today (December 14), we add trips to Greece and Italy to that list, as well as two important developments in which Al Qasimi has participated, involving the creative economy and Arab cultural heritage.

We’ll touch on each of these four areas of focus here today (December 14), so that these aspects of the association’s and Al Qasimi’s work aren’t lost as we all move toward the many distractions of the season. 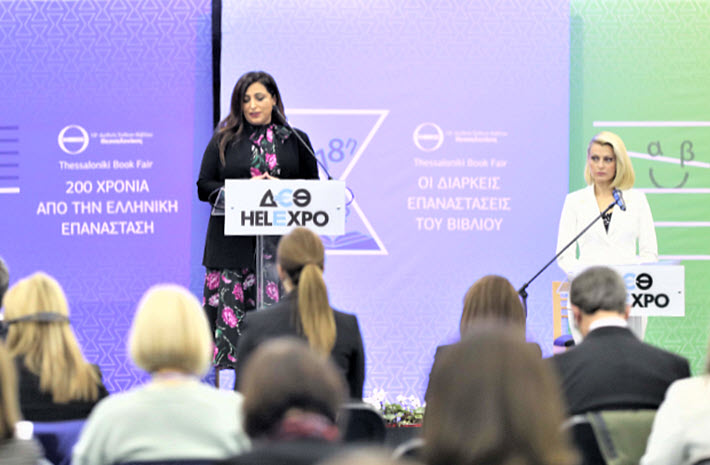 In our pre-fair coverage of the Thessaloniki International Book Fair (November 25 to 28), an Aldus Network fair, it was good to hear the fair director Nopi Chatzigeorgiou’s optimism as Greece, she said, has been cultivating new cultural relationships with other countries.

Timing her visit to coincide with the book fair events—something she has done to good effect in several of her international stops—Al Qasimi in Thessaloniki focused on issues of intra-industry cohesion and bridging the digital gap across national and international publishing markets.

In the first instance, the IPA’s “Inspire” charter—the International Sustainable Publishing and Industry Resilience Charter (PDF)—has gained good traction among IPA member-associations and publishers, as it becomes increasingly clear that, per the charter, “Asserting the value of publishing to policymakers as an essential industry.”

The IPA is committed, Al Qasimi said, “to building a publishing industry fit for the future [and that] envisages forging deep connections with readers and understanding how they consume content” while “extending support to all publishers and markets struggling to adapt to the fast pace of change.”

“Despite the conflicts, misunderstandings, and stereotyping fueled by social media, we can still embrace and accept all voices, and we can still change our world for the better, one book at a time.”Bodour Al Qasimi, IPA

And to that point about publishers and markets struggling to keep up with the book business’ international evolution, there’s rising interest around the concept of the IPA Academy, as it’s called–not yet launched but coming in 2020. That program is being designed as a centralized international training resource intended to provide training in digital skills and concepts through multilingual master classes.

This, of course, is a reflection of the distressingly broad digital divide made evident by the arrival of the pandemic in 2020. There was a distinct advantage apparent in how readily the digitally adept publishers and book markets of the world could adapt to viral spread-mitigation measures that closed physical bookstores and favored digital reading formats as well as e-commerce.

In her keynote address at the Thessaloniki fair’s professional publishers program, Al Qasimi commended a focus on translation which, she said, can play a key role in boosting international collaboration between publishers and within the larger publishing ecosystem. “Translation is a dynamic door opener,” Al Qasimi said, “not just for business as professional publishers, but also for readers who are continuously seeking greater original content.”

And while at the Thessaloniki International Book Fair, Al Qasimi met with members of the Association of Greek Publishers and Booksellers (ENELVI), to share views and ideas about publishing industry trends and to discuss opportunities to work together. 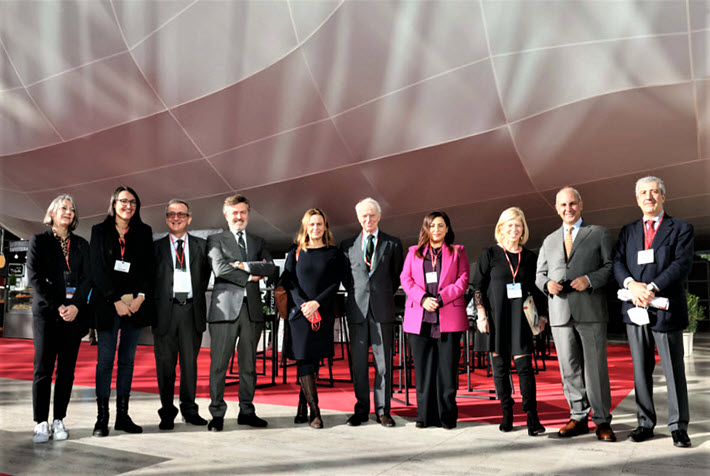 At La Nuvola in Rome with members of the Association of Italian Publishers (Associazione Italiana Editori (AIE) during ‘Piu libri piu liberi.’ Standing next to IPA’s Bodour Al Qasimi is Ricardo Franco Levi, president of the AIE and vice-president of the Federation of European Publishers. Image: IPA, Nabs Ahmedi

As we’ve reported, the AIE is among the most successful national publishers’ association in terms of pandemic recovery, thanks to the close cooperative association Levi has cultivated with Dario Franceschini, the Italian culture minister. Our report on the association’s presentation of its 2021 growth projections is here and features an expectation of at least 12-percent growth—extraordinary for the publishing industry that became part of Europe’s first pandemic epicenter in 2020.

Having joined Franceschini, Levi, and others for the Piu libri piu liberi ribbon-cutting ceremony—some 500 publishers were represented this year at the fair—Al Qasimi spoke to the association about IPA’s “Inspire” plan for international cohesion and solidarity, and the program’s potential increased importance as scientists work to get a complete picture of the B.1.1.529 “omicron” variant’s potential impact on world book markets and lives. 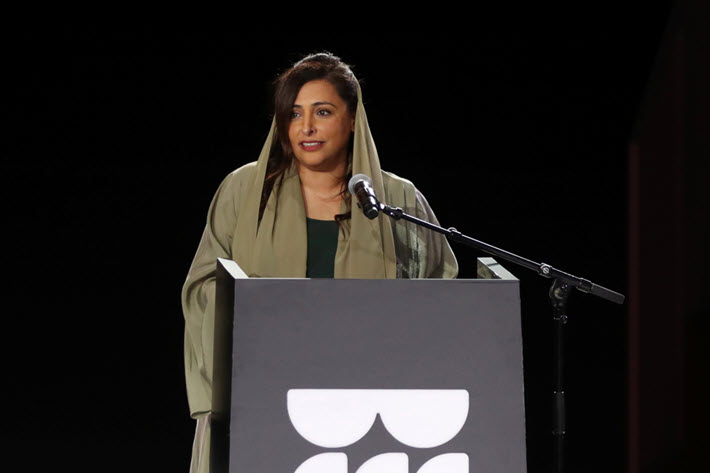 On December 7, Al Qasimi addressed the World Conference on Creative Economy, part of the Expo 2020 Dubai program, which runs through March 31 in the United Arab Emirates. The conference included among its speakers Glenn Lowry, director of the Museum of Modern Art (MoMA) in New York City, as well as authors John Hawkins and Malcolm Gladwell.

In her address for the International Publishers Association to the conference, Bodour tied her comments into the issue of emerging markets of world publishing’s growing footprint.

This year, as she pointed out, has seen a remarkable set of recognitions in the book and publishing awards sector for writers from Africa and its diaspora:

In explaining this from her purview at the IPA, Al Qasimi said she sees this as a sign of progress in “a human family that is gradually making space for more diverse voices to be heard. I see a genuine desire to honor the plurality of our human family and accept the diversity of our nuances and complexities.”

In her travels, she said, “I’ve observed a genuine desire to understand and embrace ‘the other’ in my interactions with global readers.”

“We must hold our societies together through our mutual belief in the possibilities that live within books, songs, paintings, films, and other forms of culture.”Bodour Al Qasimi, IPA

On the other hand, she said, she’s also “observed an equally intense countercurrent of desire. I’ve seen the desire to be one-dimensional, closed, almost tribal, a desire to favor one person
over another, based on gender, religion, color, ideology, citizenship, and other artificial social fault lines.

“As these two trends continue to compete in our modern world,” Al Qasimi said at the creative economy conference, “we have a mission to accomplish. We must hold our societies together through our mutual belief in the possibilities that live within books, songs, paintings, films, and other forms of culture. We need to mobilize the creative economy, not just to create more jobs and financial opportunities, but most importantly to build more bridges and give a voice to untold stories.”

Al Qasimi then explained the context in which the IPA’s Prix Voltaire was founded 16 years ago.

“One of the main reasons the IPA was created 125 years ago, was to defend the freedom to publish. Today, the IPA continues to work with publishers around the world to support them in
asserting this right.

“We created the Prix Voltaire specifically to recognize a person or an organization that has made a significant contribution in defending freedom to publish. The Prix Voltaire is a reminder to us all that there are publishers around the world who put their lives and safety at risk every day, so that we can have access to and enjoy books and ideas that enrich our perspective and advance public debate.”

Her point would soon be gravely punctuated by Tuesday’s news that the 2020 IPA Prix Voltaire-winning publisher Vietnam’s Pham Doan Trang, has been sentenced by Hanoi to nine years in prison for “disseminating anti-state propaganda” in what IPA secretary general José Borghino has condemned as “a show trial.”

Al Qasimi ended her comments in Dubai by speaking of “hope that the human family is becoming more accepting of diverse voices and narratives.” In the success of so many writers and authors linked to Africa, she said, “Their books give us hope that despite the conflicts, misunderstandings, and stereotyping fueled by social media, we can still embrace and accept all voices, and we can still change our world for the better, one book at a time.”

While in Rome, she also visited Biblioteca Angelica in the Piazza di Sant’Agostino. Its 200,000-piece collection includes 16th-century drawings from southern Italy (before it was Italy) and Latin and Greek manuscripts from the Cardinal Passionei collection. 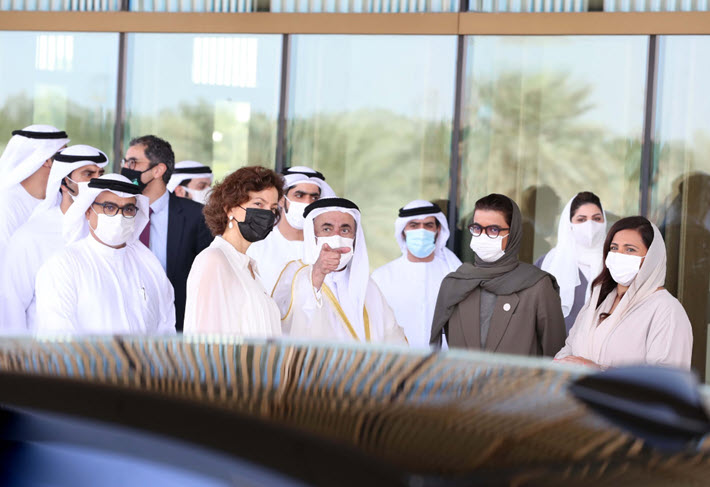 In a late-year development, Bodour Al Qasimi has welcomed UNESCO director general Audrey Azoulay to Al Qasimi’s native Sharjah for the inauguration of what’s being called the International Centre for Safeguarding of the Intangible Cultural Heritage of Arab Cultures.

Azoulay signed an agreement to create the center with Sharjah’s minister of culture and education commission chair, Noura Al Kaabi. The meeting was held at Sharjah’s House of Wisdom, where Sharjah’s Sheikh Sultan escorted Azoulay on a tour of that one-year-old high-tech library facility inspired by the ancient House of Wisdom at Baghdad.

The intent of the new program is to support UNESCO’s 2003 Convention for the Protection of Intangible Cultural Heritage—which reaches far beyond Arab cultures, of course—and to give an Arab world focus to that center’s work in implementing short- and long-term capacity-building programs and activities with a welcome emphasis on the world of Arabic and its literature.

It’s expected that the new center will also focus on building communication networks among the cultures and communities of the Arab world and the wider international cultures with which it’s making more connections every year.