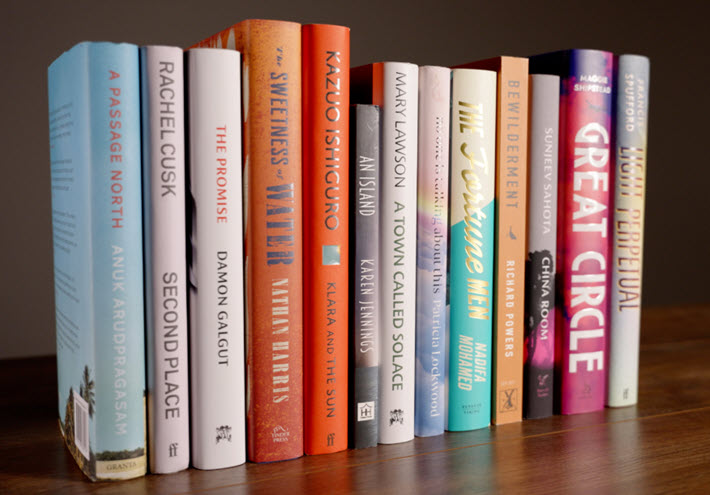 The newly announced 2021 Booker Prize for Fiction longlist of 13 titles honors proven talent as well as a couple of debuts.

Wood: ‘A Nobel Here, a Pulitzer There’

In announcing today (July 27) its traditional “Booker’s dozen” 13 longlisted titles and authors overnight, the United Kingdom’s Booker Prize for Fiction has returned to the 2017 Nobel Prize in Literature and Booker laureate Kazuo Ishiguro—three times shortlisted for a Booker in the past. He won the Booker in 1989 for The Remains of the Day. He was shortlisted in 2005 for Never Let Me Go, in 2000 for When we were Orphans, and in 1986 for An Artist of the Floating World.

In fact, as heartening as it always is to see Booker attention for debut writers, it’s bracing to see the wealth this year of so much previously proven talent. In addition to Ishiguro’s handsome track record with what is arguably the English language’s most influential literary prize, we find on the list today:

This time, two novelists are longlisted for their debut publications: the Americans Nathan Harris for his The Sweetness of Water and Patricia Lockwood for No One Is Talking About This.

Like Olympics sports journalists totting up national medals here, we can tell you that six nations are referenced in these longlisted works. This list adds up to 15, not 13, because two of the authors identify as having both British and another country in their background:

The Booker Foundation’s media messaging points to four independent publishers on the list: Bloomsbury, Granta, Faber, and—for the first time—Holland House Books. Faber & Faber is at the opposite end of that spectrum, having won the Booker Prize seven times, making it second only to Penguin Random House’s Jonathan Cape, which as eight wins to its credit.

The list was chosen from 158 novels published in the United Kingdom or Ireland between October 1 of last year and the upcoming September 30. The Booker Prize for Fiction is open to writers of any nationality writing in English and published in the UK or Ireland.

The shortlist of six books is expected to be announced on September 14. Shortlisted authors each receive £2,500 (US$3,456) and a specially bound edition of their book. The winner is to be named on November 3 at Broadcasting House’s Radio Theatre in partnership, again this year, with the BBC for live broadcast on several of its many outlets. The winner receives £50,000 ($69,110).

Jasanoff: ‘Power To Absorb the Reader’

The Booker jury is chaired by historian Maya Jasanoff and also comprises:

“Reading in lockdown fostered a powerful sense of connection with the books, and of shared enterprise among the jurors.”Maya Jasanoff

In a prepared statement for the longlist announcement, Jasanoff says, “One thing that unites these books is their power to absorb the reader in an unusual story, and to do so in an artful, distinctive voice.

“Many of them consider how people grapple with the past—whether personal experiences of grief or dislocation or the historical legacies of enslavement, apartheid, and civil war. Many examine intimate relationships placed under stress, and through them meditate on ideas of freedom and obligation, or on what makes us human.

“It’s particularly resonant during the pandemic to note that all of these books have important things to say about the nature of community, from the tiny and secluded to the unmeasurable expanse of cyberspace.

“Reading in lockdown fostered a powerful sense of connection with the books, and of shared enterprise among the jurors. Though we didn’t always respond in the same way to an author’s choices, every book on this list sparked long discussions among ourselves that led in unexpected and enlightening directions. We’re excited to share a list that will appeal to many tastes, and, we hope, generate many more conversations as readers dig in.’

And Gaby Wood, the Booker Prize Foundation’s literary director, says, “In recent years, Booker Prize longlists have drawn attention to various elements of novelty in the novel: experimentalism of form, work in unprecedented genres, debut authors. This year’s list is more notable for the engrossing stories within it, for the geographical range of its points of view, and for its recognition of writers who have been working at an exceptionally high standard for many years.

“Some have already been rewarded with prizes–a Nobel here, a Pulitzer there. Two are debut novelists. Many have fallen within the Booker’s orbit before.

“To see them brought together, and to hear from them in these books, is to know that literature is in the most capable and creative of hands.”

Andrew Rhomberg’s Jellybooks is collaborate with the Booker on a digital magazine intended to provide information about each longlisted title and samples of the books’ texts. You’ll find that online resource here.