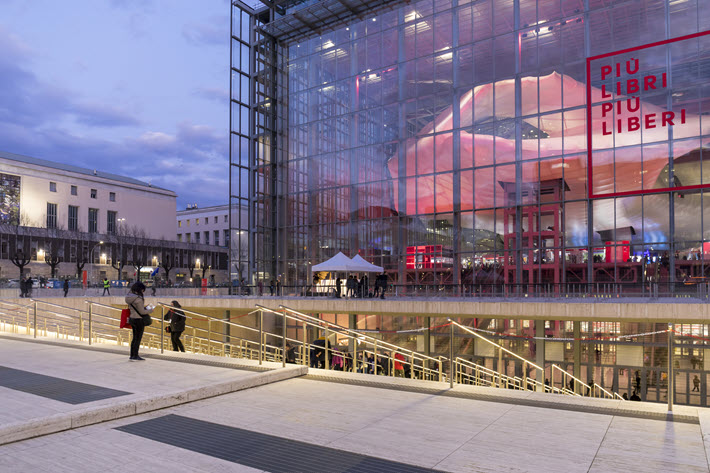 Good news for the Italian book market: Projections show market growth in Italy for 2021 may be as high as 16.3 percent over the first pandemic year, 2020.

Rome’s La Nuvola, the venue for the December 4 to 8 Più libri più liberi, Italy’s national fair for small- and medium-sized publishers. The full report of the AIE is to be made as the fair opens. Image – Getty iStockphoto: Gennaro Leonardi

With an accomplished statistical research unit built into its structure, the Association of Italian Publishers (Associazione Italiana Editori, AIE) under Ricardo Franco Levi‘s direction is a reliable leader in forecasts near the end of each year.

This week, the Italian industry is in the run-up to its annual Più libri più liberi, the national fair for small and medium publishing companies. The show runs Saturday through Wednesday, December 4 through 8, at Rome’s convention center, La Nuvola (The Cloud). Today (December 2), AIE’s research team presented the figures we have here during a preview of the fair.

These observations and projections are generated using NielsenIQ data. The top-line conclusion is that Italy’s trade publishing sector is being forecast to close 2021 up between 12.6 and 16.3 percent over the first coronavirus COVID-19 pandemic year, 2020.

“The data presented today,” according to AIE’s president Ricardo Franco Levi, “bears witness to the energy of Italian publishing, supported by investments made by publishers and supported over the course of the last two years by long-sighted public intervention policies.”

As Publishing Perspectives readers know, Levi’s reference is to the remarkably effective partnership he has formed with the culture minister Dario Franceschini. The result has been many instances of attentive, responsible economic support from Rome for the arts and letters of Italy, thanks to the ability of Franceschini and Levi to make the case.

“The current situation, however,” Levi cautions, “reminds us of the persistence of structural difficulties of our country, such as low reading rates, and new and difficult circumstances, which include rising paper prices. All these issues will be examined, along with many others, during the book fair in Rome.”

And at that fair, a presentation of this market data will be part of the first meeting in the trade programming developed for publishing professionals at the Più libri più liberi. 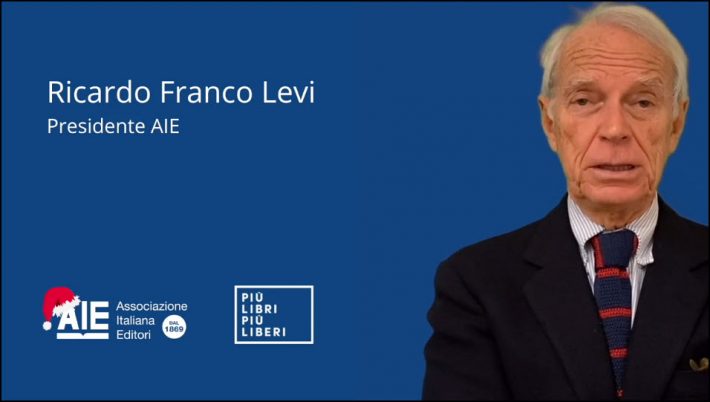 A Preview of Market Data Indicators: 2021

These figures, calculations, and projections cover the period from January 4 to November 11 of this year. 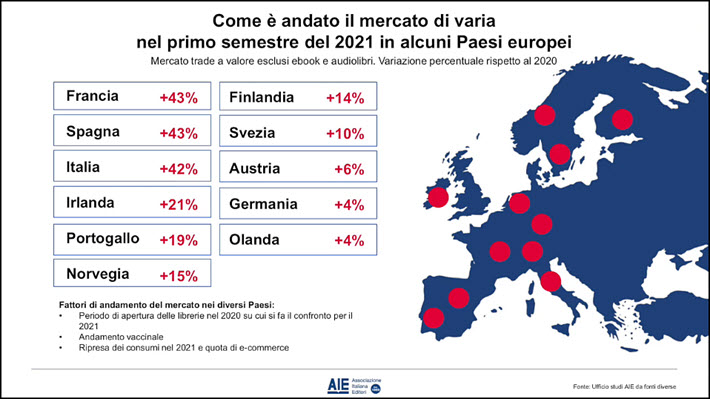 This graphic from the Italian publishers’ association provides a helpful look at some key European markets’ performances in the first half of 2021. Driving factors, as listed at the bottom of the image, include the timing of a market’s ability to get its bookstores reopened amid COVID-19 spread-mitigation efforts; the strength or weakness of a market’s coronavirus vaccination program; and the level of sales conducted in the digital retail space. Image: AIE 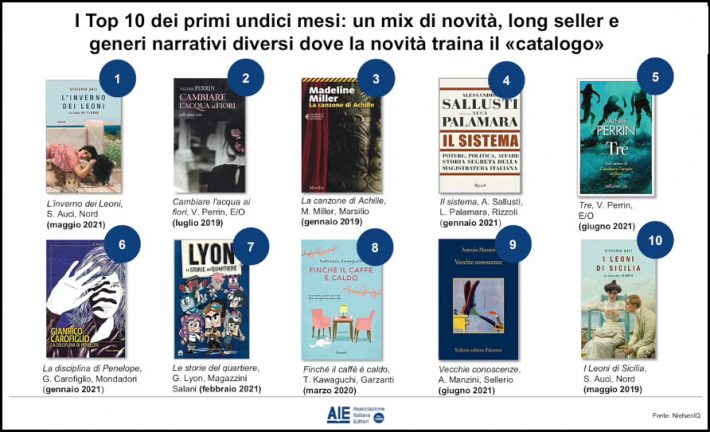 The Top 10 bestsellers reported for the Italian market in 2021. Image: AIE

Here’s an embed of the presentation, in Italian, of course: