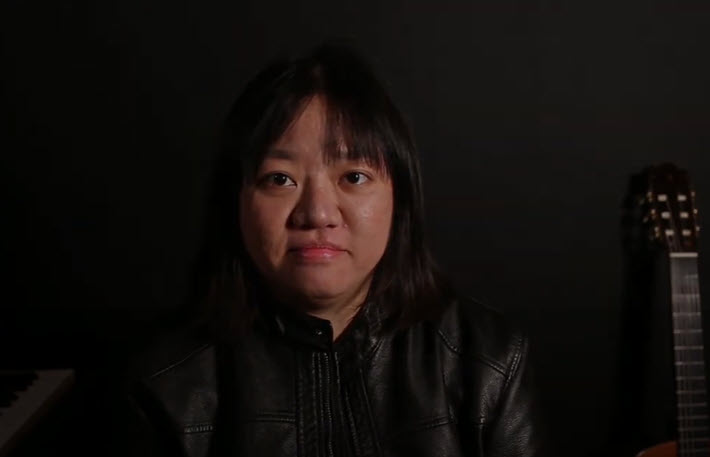 Pham Doan Trang, an author and publisher in Vietnam awarded the International Publishers Association’s Prix Voltaire for the work of the clandestine Liberal Publishing House, is seen here in a 2018 appeal for humanitarian action in response to her Homo Homini Award of 2017. Image: From video, Creative Commons license

The recipient of the 2020 Prix Voltaire from the  International Publishers Association (IPA) for Vietnam’s clandestine Liberal Publishing House, Trang had last been in the news in late October when a trial date was understood to have been set for her in early November. At that point, an international cohort of 28 advocacy associations made a joint appeal for her release. As it would happen, the trial seems to have been held a month later than anticipated.

José Borghino, IPA’s secretary-general, today has issued a statement from the association’s offices in Geneva, saying, “All publicly available information about this case, the charges and the process make it impossible to see this as anything but a show trial.

“The International Publishers Association commends Pham Doan Trang for her bravery in the face of this persecution which can only be intended to intimidate others into silence.”

As Chris Humphrey is reporting today for the Washington Post, “In sentencing Trang, the Hanoi People’s Court gave her more time in prison than the seven to eight years prosecutors had requested. Trang, who was repeatedly interrupted by the judge during the trial, rejected all the charges. Her lawyers said she was informed of her trial date only a day before.”

Amnesty International’s Ming Yu Hah, the deputy regional director for campaigns, has also spoken out, saying, “It is outrageous that the Vietnamese authorities are convicting Pham Doan Trang, a courageous journalist and human rights defender, who has for years fought for a just, inclusive, and rights-respecting Viet Nam.

“Her work should be celebrated and protected, not punished and criminalized.”

Trang: ‘In a Less Fortunate Situation’

Pham Doan Trang has an extensive relationship of protest and harsh response from the authorities. It is said that she has a limp because of an injury suffered during an environmental protest broken up by police six years ago.

Trang was given Reporters Without Borders’ 2019 Prize for Impact. It’s write-up of her work said, in part, “The author of many books including one defending the rights of Vietnam’s LGBT communities, she has been beaten by the police because of her work and was detained arbitrarily twice for several days in 2018.”

According to an Agence France-Presse report carried today by the Bangkok Post, during her hearing, Trang testified to being detained 25 times since 2015, and said she had been terrorized by security forces. She’s remembered by many in Vietnam, that report notes, for her 2016 writings on Vietnam’s toxic spill that killed tons of fish and “prompted rare protests across the country.”

The report says that journalists and diplomats were allowed to view her one-day trial via a video feed, the signal of which frequently cut out.

In TheVietnamese, a journalists’ magazine Trang founded, her “final statement” from her trial has appeared today. It reads, in part:

“In a less fortunate situation, if a government has authoritarian tendencies and finds what the citizen says unacceptable, then it could simply write books or articles to rebut that citizen, or even boldly reach out to the foreign press to arrange an interview in which a government representative expresses his/her viewpoint or responds to the citizen in-kind.

“But the Socialist Republic of Vietnam does none of this. Instead, it chooses to respond in a more vile, foolish, and heinous manner, imprisoning its citizens simply because they write works or respond to interviews with foreign journalists.”

At the time the IPA awarded Trang and the Liberal Publishing House the Prix Voltaire for publishing valor in the face of authoritarian oppression, it was understood that she and her colleagues had no standing offices or stable visibility in the Vietnamese book market. Their work was called clandestine because they frequently moved from one place to another, taking equipment with them as needed, to avoid detection by the authorities as they produced writings critical of Hanoi.

“The award that we receive today,” Trang said in her acceptance video, “does not just recognize our tireless efforts but it represents the bravery of tens of thousands of Vietnamese readers who have been harassed, who have been arrested, and interrogated simply for reading our books.”

More from Publishing Perspectives on the International Publishers Association is here, and on the Prix Voltaire is here.