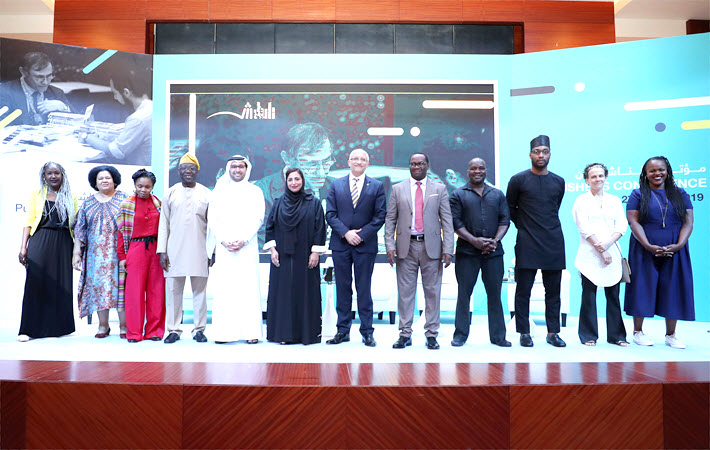 Founded only in May, the new fund created by Dubai Cares and the International Publishers Association is making its first grants. 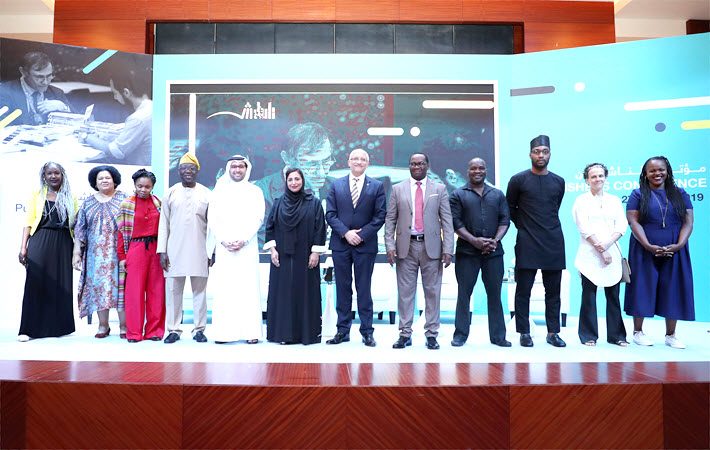 The Africa Publishing Innovation Fund leadership—Dubai Cares’ Tariq Al Gurg and the International Publishers Association’s Bodour Al Qasimi and Hugo Setzer are at the center—is joined onstage by representatives of the organizations that will share in the 2020 funding at Sharjah Book Authority’s Publishers Conference on the eve of the opening of Sharjah International Book Fair. Image: Nabs Ahmedi

Amid loud applause, the still-new Africa Publishing Innovation Fund today (October 29) has named seven African projects as recipients of first grants of US 20,000 each.

In addition, a library restoration initiative, Book Bunk, is to receive US$50,000 from the fund.

Representatives of the selected recipient projects were called to the stage this morning in the United Arab Emirates during the final morning of the 2019 Sharjah International Book Fair Publishers Conference, which has its official opening on Wednesday (October 30).

And in one of the best moments of the newly expanded three-day Publishers Conference, publisher Bibi Bakare-Yusef, who co-founded Cassava Republic Press with Jeremy Weate in 2006, was asked by Kenya Publishers Association president Lawrence Njagi what would help encourage younger publishers in Africa to step forward.

“What would encourage those publishers,” she said with perfect timing, “is for you to retire.”

As the room broke into laughter, she went on to say that what many younger publishers in the continent’s many markets need is to hear the old—and usually male—guard say is, “You have permission” and to welcome women. (More of Bakare-Yusuf’s incisive viewpoints on how women are driving trade publishing in Africa is in our interview with her.)

Publishing Perspectives readers will remember that this is the fund created in May, when Dubai Cares CEO Tariq Al Gurg and the Sheikha Bodour Al Qasimi, vice-president of the International Publishers Association (IPA) signed an agreement in the run-up to the June 14 and 15 Africa Regional Conference in Nairobi in association with the Kenya Publishers Association.

And in a prepared statement, Bodour is quoted, saying, “To have reached this point in five months is phenomenal, and it’s wonderful to see intentions quickly turn to action.

“This was a demanding process for all concerned, but for none more than the applicants, who have been under considerable pressure to demonstrate the sustainability and scalability of their ideas.

“The competition was tough, and every single application received had real potential to bring big benefits to literacy, reading or book accessibility in Africa. This is why the committee has awarded five projects an equal share, to ensure these Dubai Cares grants will impact a broad range of issues and countries.”

The specific  targets of the new fund’s activities include literacy, book access, indigenous languages, and library restoration in Africa.

The six winning bids for a share of the Africa Publishing Innovation Fund were selected after what organizers say was a rigorous process led by a committee of African publishers under Bodour’s chairmanship.

Dubai Cares is part of Mohammed bin Rashid Al Maktoum Global Initiatives and the IPA now has some 82 full member-associations from at least 70 countries.

The following descriptive information on each of the selected projects is provided to us by the fund.

Accord Literary (Ghana), a literary agency, will mentor, develop and encourage African authors writing for young readers. Accord Literary, founded by UK publisher Sarah Odedina and Ghana-based publisher Deborah Ahenkorah, seeks original and unique African voices, and to help get their books into the hands of readers around the world. (Read Publishing Perspectives‘ announcement about the launch of Accord Literary in May.)

Cassava Republic (Nigeria), the publishing house led by Bibi Bakare-Yusuf, will produce and translate 10 children’s books into three Nigerian languages. The aim is to give children access to beautiful, illustrated pictures in their native tongue, to aid cognitive development and instill cultural confidence at an early age. Independent publisher Cassava Republic wants to create a special imprint for local language publishing. (More of Publishing Perspectives’ coverage of Cassava Republic is here.)

OkadaBooks (Nigeria), an e-publishing startup, will drive literacy by giving teachers, students and parents free access to books their children can relate to via mobile phones, which are widespread and affordable. OkadaBooks will generate and distribute Nigerian content, identifying new talent through writing competitions.

Positively African (Kenya), a content-creation and literary events company, will invest the money in the Story Jukebox, to make African literature accessible, encourage lifelong learning and help connect communities. It will distribute audio stories Africa-wide via digital platforms and partnerships with universities and centers for the visually impaired. The first phase will focus on Kenyan writing, with the adaptation of eight stories from the Humans of Nairobi anthology.

Puku Foundation (South Africa), is a nonprofit led by Elinor Sisulu and promotes children’s literature, education and literacy in Southern Africa. It is building a digital portal called Pukupedia as a hub for multilingual expertise in children’s literature; nurturing new local talent through writing workshops, online courses and mentoring; and developing reading culture among teachers, librarians, writers, literacy activists and young people. (More of Publishing Perspectives’ coverage of the Puku Foundation is here.)

In the African Rural Libraries Initiative, Kakuma (Kenya), the world’s largest refugee camp will receive an equal share of the grant to implement libraries for the resident students. Kakuma camp is home to refugees from DRC Congo, Rwanda, Burundi, South Sudan, Sudan, Somalia and Uganda among others. The fund will add to the efforts made yearly by other organizations working to supply the camp with books, allowing young children, mature students, and teachers to stay up-to-date and knowledgeable about evolving topics and updated knowledge.

Book Bunk, the project to restore the McMillan Memorial Library in Nairobi, has been awarded US$50,000 towards work on the library’s Kaloleni branch. In a surprise move, Dubai Cares has also provided an additional $10,000 worth of children’s books to stock the library. Book Bunk works with the Nairobi authorities to encourage community engagement in libraries, through events, walking tours, and film screenings.

In his comments, Dubai Cares’ Al Gurg is quoted, saying, “Through this partnership, Dubai Cares will closely work with IPA for the next four years with a range of local partners, including publishers, policymakers and civil society, to implement innovative and replicable solutions to transform the future of African publishing, promote approaches to longstanding publishing industry challenges and catalyze stakeholder co-investment.”

As part of the pact, Dubai Cares has committed 2,938,800 UAE dirhams (US$800,000) over four years to expand the reach of IPA’s programs in Africa as well as to cooperate on new initiatives at the nexus of sustainable development, education, and publishing.