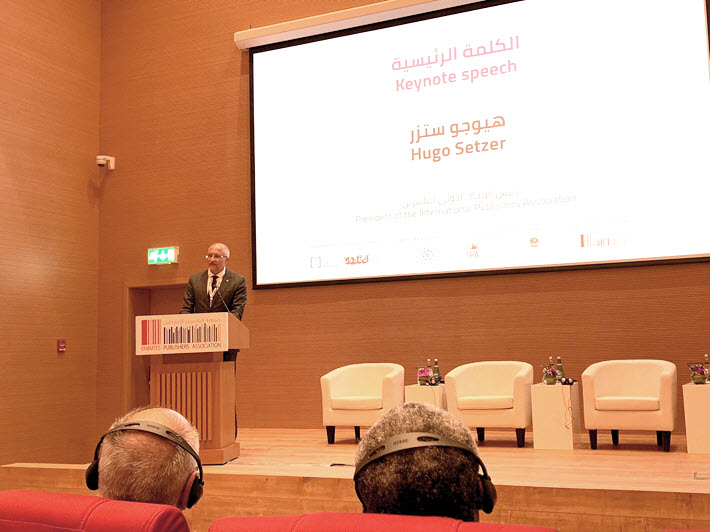 Grounded in discussions on supporting UAE-based education publishers, this two-day program includes road-mapping sessions to plan the next five years. 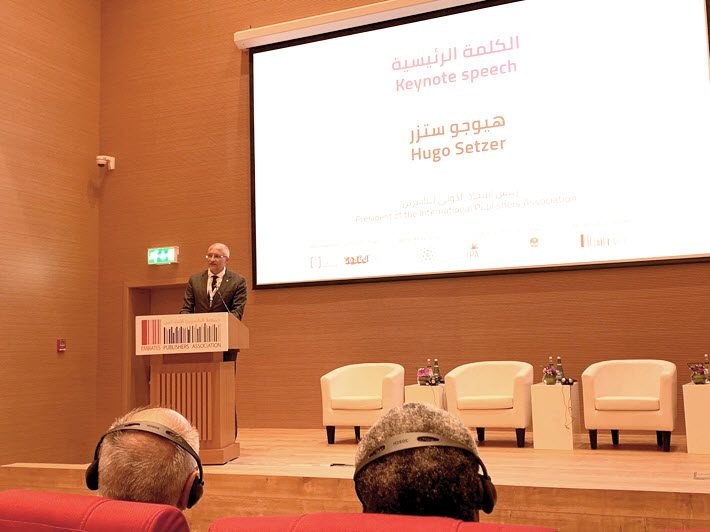 ‘We Are Here To Lay Down Concrete Steps’

The educational publishing event examines progress and plans for the United Arab Emirates’ educational publishers in aligning their efforts with goals of the country’s ministry of education to create what’s described as “a pioneering and global knowledge society.”

In fact, the seminar is a partnership between the Emirates publishers’ organization and the International Publishers Association (IPA), the vice-president of which, the Sheikha Bodour Al Qasimi, is the founding patron of the EPA.

As Setzer has pointed out in his remarks, “We have some amazing international experts with us from Japan, Korea, Singapore, Germany, and Ghana.” 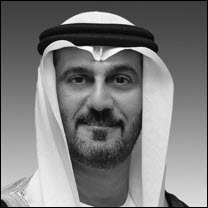 And the key component of the program developed by the UAE’s education minister, Hussain Ibrahim Al Hammadi, is a five-year commitment designed to upgrade the national educational system and curricula.

Major emphasis is being placed on protecting Emirati heritage and cultural identity, making this an interesting case in which innovation is expected to be coordinated with traditional values as well as a broad embrace of  contemporary context.

Setzer’s keynote is to be followed by an address from Al Hammadi, the minister. And he, in turn, then hands off to Rashid Al Nuaimi, the executive director of the UAE’s National Media Council.

As Setzer has told the assembly this morning, there’s a kind of parallel structure in the fact that while the UAE is looking to devise an innovative response to its educational ambitions, “The climate crisis, regional conflicts, poverty, and famine will require pioneering solutions to bring countries and communities together to make the necessary, urgent progress.

“Publishers,” he said, “have their role to play. Indeed, many are already doing so. The International Publishers Association brings them together in our Educational Publishers Forum, under the able leadership of Wilmar Diepgrond, who’s with us today.”

And Setzer cites “three essential foundations” in what publishers need to fully be engaged in the educational initiative under discussion:

In that last point, of course, Setzer has touched on a challenge seen in many markets of the world in which governments take over the production of textbooks, often the most lucrative element of a national publishing market.

Still, Setzer has assured the assembly in Sharjah that he doesn’t see such an unhealthy construct developing in the UAE’s planning, and that the conference has only to keep in mind the importance of the protection of intellectual property— copyright without, in other words, the kind of damaging educational “exceptions” that have rocked the Canadian market—and of the centricity of the freedom to publish, without fear of censorship, condemnation, or reprisals.

“The schedule for next two days stands out because we are not just here to talk and come back next year” Setzer has said. “We are here to lay down concrete next steps.”

And what he means is clear from the agenda, which is devised, as Setzer has put it, with today as a “warm-up” of discussions and commentary, and “the real work” on Tuesday, when the program divides into a complex array of breakout sessions that first consider how each element of the scenario—the EPA, teachers, and the ministry—can work together, and then focus on five-year-plans for each part of that collaboration.

All told, more than 20 speakers, group leaders, and facilitators are on-hand in today and tomorrow’s programming, including:

And a guiding set of goals and desired outcomes will become a kind of touchstone during the sessions, that list comprising both careful attention and evaluation of international best practices and “quick-wins with which the ministry of education and educational publishers can cooperate to build trust, demonstrate the educational publishing industry’s abilities, and replace imported solutions that lack local context.”

More from Publishing Perspectives more on developments in Sharjah is here. And more from us on educational publishing is here.