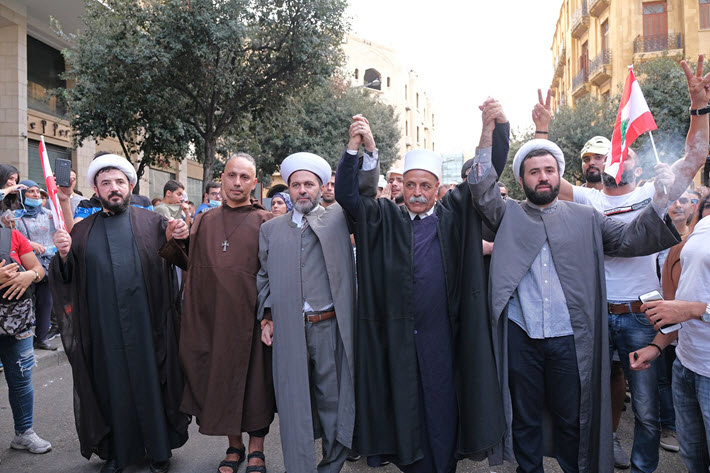 As Saad Hariri steps down, three of Lebanon’s best known writers say that what makes them hopeful is ‘the possibility that we can get rid of a sectarian political system.’ 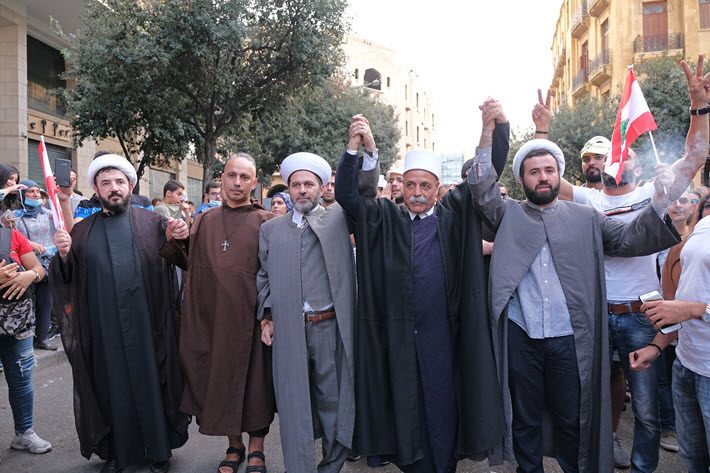 Religious men of many faiths protest in the streets of Beirut. Image provided by Jad G. Ghorayeb

Editor’s note: As we publish this story tonight (October 29), Lebanon’s three-time prime minister Saad Hariri has announced his resignation to sounds of cheers on Beirut streets, following 13 days of nationwide protests. As Tamara Qiblawi reports for CNN, the country has seen ‘rapid economic deterioration, ballooning debt, and rising prices.’ And the BBC quotes Hariri saying in his statement, ‘It has become necessary for us to make a great shock to fix the crisis.” —Porter Anderson

‘A Sense of a New Beginning’

Recent protests in Hong Kong, Algeria, Chile, and Iraq have been volatile and often violent, whether driven by demands for democratic reform, condemning political corruption, or decrying disparities between haves and have-nots.

“Every day when I wake up, I cross my fingers.”Iman Humaydan

Lebanon’s protests began as the government proposed what proved to be a last straw, a tax on WhatsApp calls. Citizens’ anger has widened to embrace a profound financial crisis and corruption, bringing the country to a standstill.

While the Lebanese grievances are numerous, what stands out is the fact that many in the country have overcome sectarian divisions to find themselves united as a country with universal concerns.

The small Mediterranean nation has long played a defining role in Arab literature and its publishing industry for several reasons—most notably the number of publishing companies based in Beirut, as well as a revival of literature in the Arabic language that began in the 1940s at the end of the French mandate, and the country’s authors, many of them published in translation in numerous languages.

Publishing Perspectives has spoken with three acclaimed authors, Iman Humaydan, Charif Majdalani, and Jabbour Douaihy, about the events rocking Lebanon in the past two weeks, and about their perspectives on what could be ahead.

Humaydan: ‘Every Moment Inspires Me’ 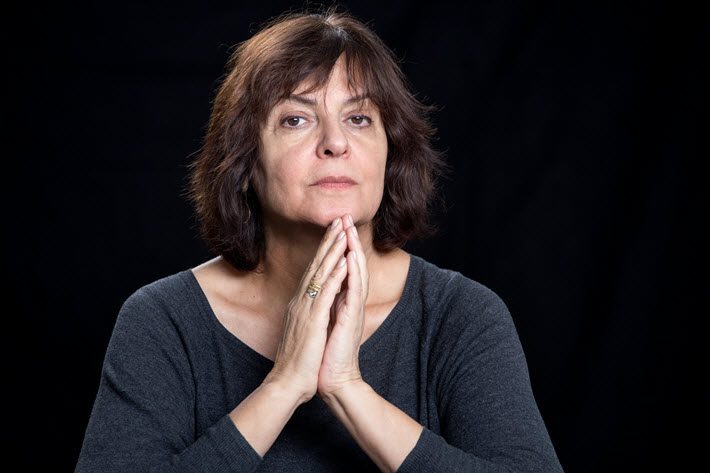 Based in Paris and serving as president of PEN Lebanon, Iman Humaydan writes in Arabic and described a multicultural, multi-faith village in her Wild Mulberries (Interlink Publishing Group, 2008, translated by Michelle Hartman).

She remembered the setting from her childhood, and says that the current uprising is “the Lebanon I was told about by my parents. It’s the Lebanon I dream of living in—the possibility that we can get rid of a sectarian political system.

“Every day when I wake up, I cross my fingers.”

Majdalani: ‘A Future Without Sectarian Leaders’ 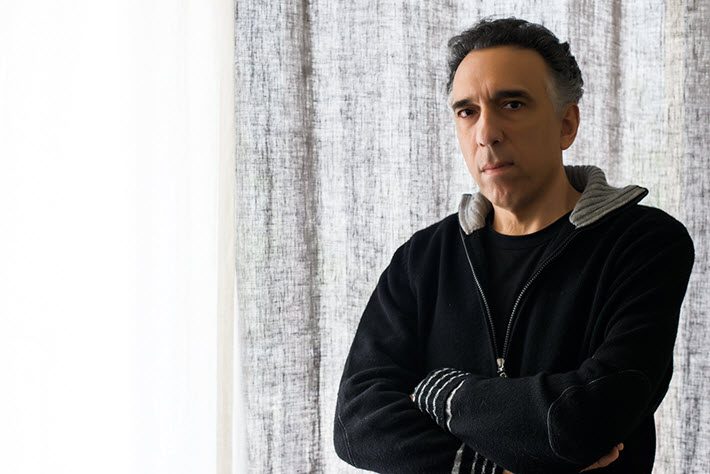 Beirut-based Charif Majdalani, who writes in French, says about the Lebanese protests, “Not a single person saw this coming. It’s a crushing setback for political analysts.

“This challenges the core of the entire Lebanese political system.”Charif Maidalani

“Everyone, including myself, was sunk in the bleakest pessimism until … [the uprising] started …

“What’s most important is that the Lebanese have decided to see a future without their sectarian leaders. Their self-perception had always been built alongside a political leader within a community, in a mafia-like system. People from each community realized that their political leaders were one and the same and are wholeheartedly rejecting them.

“This challenges the core of the entire Lebanese political system.”

Humaydan says she’s been waiting for an event like this.

“I feel like this should have happened a long time ago,” she says. “I don’t buy all these accusations that people are being manipulated. My family members living in villages in the mountains have gone down to the streets. They’re ordinary people.

“They used their money to travel to the center of Beirut because they’re thirsty for this feeling of belonging. To a country.”

Douaihy: ‘A Revolution of the Individual’ 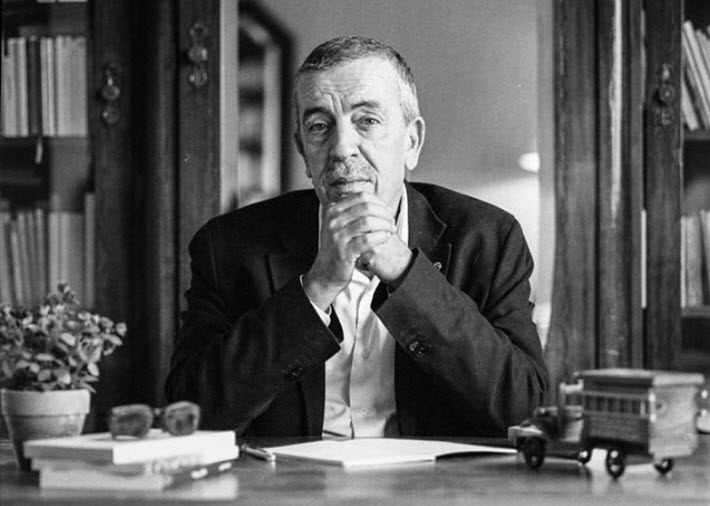 Jabbour Douaihy lives in Zgharta, in northern Lebanon, and writes in Arabic. His Matar Hzayran (June Rain) is to be released by Interlink Publishing Group on November 6 in Paula Haydar’s translation. The book was a finalist for the 2008 International Prize for Arabic Fiction.

“When you’ve been witness to everything we’ve seen, you can only be circumspect.”Jabbour Douaihy

Each evening, he says he travels with a group to the city of Tripoli to demonstrate.

“In 2005,” Douaihy says, “the Lebanese began to take their destiny into their own hands and demonstrated to get the Syrian army out of Lebanon. But this was a movement coordinated by political parties. Sectarian politics were still present, with all the flaws that preclude a modern, democratic state …

“Today, people are taking to the streets on their own. It’s a revolution of the individual, to establish themselves as individuals, without a leader.”

The Current Crisis: Are They Afraid To Be Hopeful?

All three writers experienced the Lebanese civil war that lasted from 1975 to 1990, as well as the ensuing difficulties of a failed state. This prompts a question about their outlooks now.

“What’s good with our Lebanese youth is that they weren’t brought up on misleading ideologies like we were. They want something down to Earth. They want clean water, their garbage collected, to get treatment at a hospital and find a job … The older generation lost the ability to dream.”

“What’s good with our Lebanese youth is that they weren’t brought up on misleading ideologies like we were.”Iman Humaydan

Humaydan says she’s working on a new novel, which takes place after World War II, it’s story shared between Europe and Beirut. “It was when there was a dream of bringing our city into the heart of the world,” she says, “but we could only do it with fiction.”

Today, “Every moment inspires me.”

Majdalani, whose newest book Des Vies Possibles (Possible Lives) was published this year by Éditions Seuil, says he might have been skeptical if the demonstrations had been divided along sectarian lines.

“This is something radically new,” he says. “It will make a mark on the country’s history and is a new beginning no matter what happens.

Douaihy says, “When you’ve been witness to everything we’ve seen, you can only be circumspect.”

“We’re dealing with a new generation,” Douaihy says. “My own children surprise me. There’s a sense of a new beginning and we’re hopeful.” 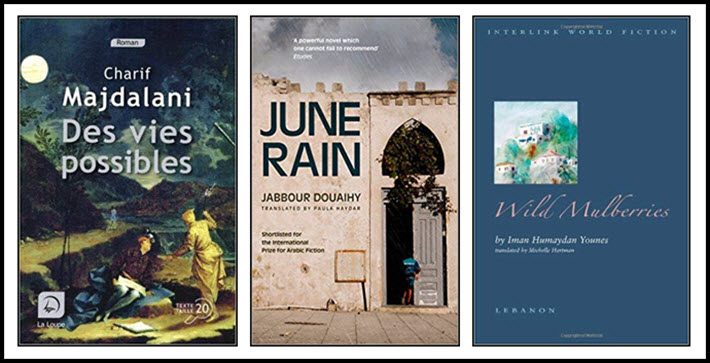 More from Publishing Perspectives on Lebanon’s market is here. More from us on Arabic literature is here. And more on translation is here.