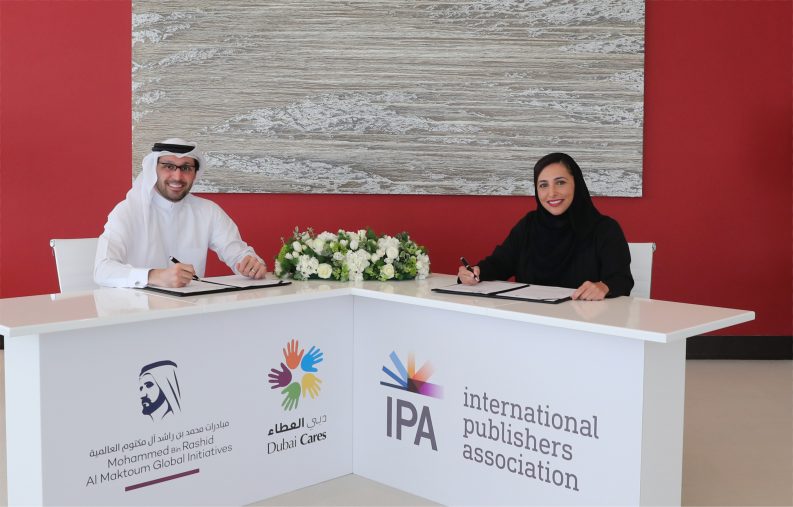 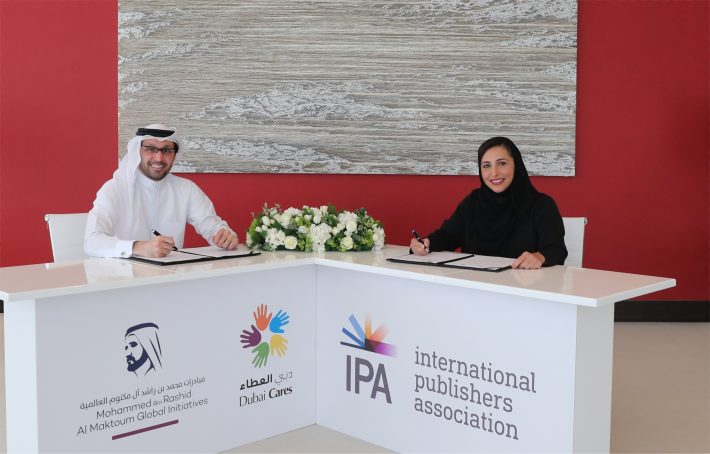 In its funding news today (May 20), the United Arab Emirates’ far-reaching educational philanthropic program Dubai Cares has committed to a major four-year allocation of some 2.9 million dirhams (US$800,000) in support of literacy, book access, indigenous publishing, and library restoration work.

The agreement creates a substantial new source of support for the work of the International Publishers Association (IPA). With 81 member-organizations from 69 countries, the Geneva-based IPA is the largest association of its kind, and the signing of this memo of understanding between Dubai Cares and the IPA has taken place less than a month before the June 14 and 15 Africa Regional Seminar it’s staging in Nairobi in association with the Kenya Publishers Association.

Dubai Cares is part of the influential foundation Mohammed Bin Rashid Al Maktoum Global Initiatives. Founded in 2007 by Dubai’s ruler, the vice-president and prime minister of the UAE, the charity’s mission is “to break the cycle of poverty by ensuring all children have access to quality education.” The program sees education to be “an irrevocable asset and an essential right of every child.”

In its literature, Dubai Cares says, “We uphold this belief by delivering integrated, evidence-based, quality education programs through strategic partnerships to create sustainable impact in the lives of underprivileged children globally.”

The IPA agreement, then, is one of those strategic partnerships recognized as valuable enough by the Dubai-based foundation to warrant this level of commitment. And as it happens, Kenya–host country to the potentially pivotal IPA seminar–has been chosen as one of two initial focus countries, with Morocco being the other. Dubai Cares, the work of which has reached 57 countries, counts 20 of those nations on the African continent.

For the International Publishers Association, the agreement has been signed by the Sheikha Bodour Al Qasimi of the emirate Sharjah, currently UNESCO’s World Book Capital, the only Arabian city to have been so honored.

In January, Bodour became the IPA’s first woman vice-president in decades. She is also the driving energy behind the IPA’s still-new Africa Regional Seminars series, which began in 2018 with its initial event in Lagos.

Speaking of the importance of the new accord with Dubai Cares, Bodour is quoted, saying, “Because it influences education, reading, and socio-cultural development, publishing can have a transformative impact on countries and individuals and serve as a tool to address challenges such as illiteracy, poverty, conflict, inequality, and unemployment.

“Our work in Africa is based on quickly moving from words to action, and Dubai Cares is one of the most agile, responsive partners we could hope to partner with. IPA and Dubai Cares will be working with a range of on-the-ground partners, including publishers, policymakers, and civil society, to implement innovative, replicable solutions to transform the future of African publishing.” 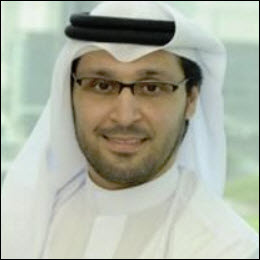 “For this reason, the publishing industry has significant potential to contribute to sustainable development.

“In supporting the development of national reading cultures, strengthening the publishing industry often has a significant impact on socio-economic development. Reading, for example, broadens people’s imagination and opens minds to new possibilities and innovative ideas.

“Through this partnership, we will work with the IPA and local implementing partners on tough, systemic challenges, such as textbook shortages and rural illiteracy, which prevent a number of African countries from achieving United Nations Sustainable Development Goal 4.”

His reference is to the UN’s fourth of 17 Sustainable Development Goals. That fourth goal mandates a quality education, stipulating that by 2030, the world community must “ensure that all girls and boys complete free, equitable, and quality primary and secondary education” and “eliminate gender disparities in education and ensure equal access to all levels of education and vocational training for the vulnerable, including persons with disabilities, indigenous peoples and children in vulnerable situations.”

Regular readers of Publishing Perspectives, of course, know that the IPA in September created with the United Nations the SDG Book Club, which offers a monthly curated reading list of titles that will encourage children and YA readers to engage with the goals. At least six titles are to be designated each month, one in each of the official languages of the United Nations—Arabic, Chinese, English, French, Russian, and Spanish.

And independent of her IPA work, Bodour is a fast rising champion of children in vulnerable situations on the world stage, delivering Arabic-language books for children to young readers who are caught in the Arab diaspora, often as refugees in countries far from their own. Her Kalimat Foundation for Children’s Empowerment has delivered thousands of specially chosen books for use in schools and libraries in Sweden, Italy, and Jordan.

In announcing the news of the Dubai Cares partnership, IPA president Hugo Setzer is quoted, saying that the organization “shares a common belief in the role of books and quality teaching and learning materials in education.

“Publishers, and the International Publishers Association through initiatives like this, our SDG Book Club, and our African Seminar series, are committed to improving the education of children around the world.

“That doesn’t just mean access to books ‒ it also means structurally supporting the entire publishing ecosystem to create a network of authors, publishers, distributors, and libraries that can in turn support teachers and change the futures of millions of children in developing countries by encouraging sustainable development.”

In its media messaging, the Dubai foundation writes that some of Africa’s mobile and Internet connectivity growth rates are among the fastest in the world, and cites the United Nations’ estimates that nearly 60 percent of Africa’s population is younger than age 24.

“IPA and Dubai Cares will be working with a range of on-the-ground partners, including publishers, policymakers, and civil society, to implement innovative, replicable solutions to transform the future of African publishing.”Bodour Al Qasimi

“If real improvements are made in literacy and education,” Dubai Cares states, “and there is an enabling economic environment for jobs and investment, Africa’s youth bulge can be a catalyst for the future of African publishing and accelerated social and economic development.”

The organization goes on to issue a resounding endorsement of the direction the many national publishers’ associations are taking together as they guide the IPA forward into its increasingly prominent place in the international book business.

“In 2018, the IPA initiated its Africa Seminar series,” says Dubai Cares’ statement, “which has evolved into a continent-wide, multi-sectoral platform for creative thinking, collaboration, and action to shape the future of African publishing.

And this is a philanthropic foundation that knows what literacy charity work at a multinational scale looks like: the organization is distributed more than 6.6 million books written in local languages and has fueled work in 57 developing countries in “early childhood development, access to quality primary and secondary education, technical and vocational education and training for youth, as well as a particular focus on education in emergencies and protracted crises, girls’ education and children with disabilities.”

All told, Dubai Cares reports, its work so far has reached more than 18 million beneficiaries.