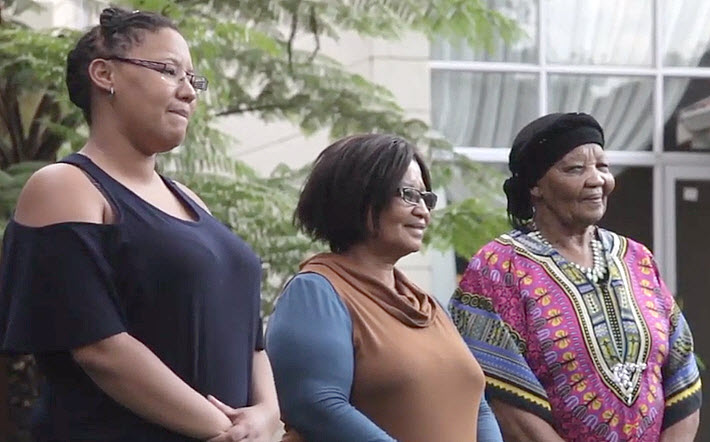 Delegates to the ‘Rising Africa’ IPA seminar in Nairobi will hear about the work of Puku, a foundation rushing to generate children’s literature in some of the continent’s dying languages. 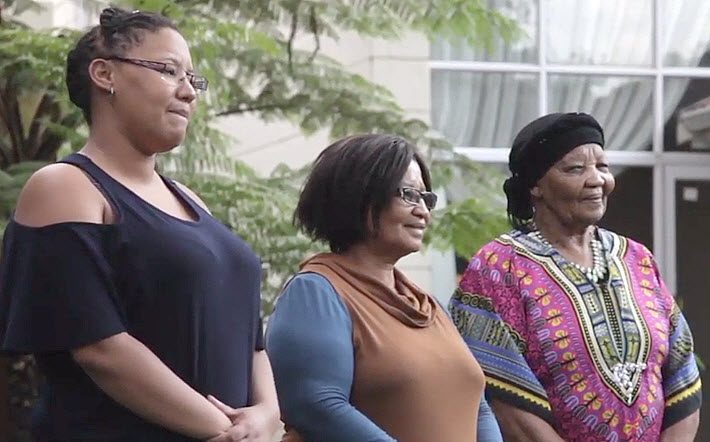 Said to be three of the four speakers of the N/uu language alive today, from left, Claudia Snyman, Lena du Plessis, and Ouma Katrina, 86, have participated in one of South Africa’s Puku Children’s Literature Foundation workshops aimed at rescuing disappearing languages by creating young readers’ content in them. Image: Puku’s ‘My Language, My Heritage’

Endangered Languages and the ‘Hegemony of English’

There are only four people left alive who speak the N/uu language in South Africa, and they’re members of one family. The matriarch is Ouma Katrina, 86 years old. Her daughter is Lena du Plessis. Her granddaughter is Claudia Snyman. And little N/aungkusi Snyman is Ouma Katrina’s great-granddaughter.

You meet them in a 10-minute video we’re embedding below in this story. And in it, you’ll also hear from Elinor Sisulu, executive director of South Africa’s Puku Children’s Literature Foundation.

There’s a panel on the second day of the June 14 and 15 conference titled “Lost Tongues: The Struggle to Preserve Indigenous African Languages.” Moderated by Jalada Africa managing editor Wanjeri Gakuru, this may arrive as one of the most intriguing and compelling moments in the programming of the seminar.

What Sisulu and her associates at the foundation are doing is creating children’s literature that captures some of the dying languages of Africa. “It’s much easier to learn a language when you’re a child than later,” Sisulu tells Publishing Perspectives in an interview. Many indigenous languages today in Africa are threatened by the major commercially dominant tongues, much as many “smaller” languages in other parts of the world are vulnerable to the rise of English as the world’s rapidly globalized lingua franca.

“The endangered languages,” Sisulu tells us, “are those spoken by the bushmen. And the government of one of South Africa’s provinces, the Northern Cape, where most of the endangered-language speakers are, is concerned and working with us in developing a strategy to produce children’s books in those languages to ensure their survival.”

This type of work is reflected in many parts of the world today, of course. In 2014, the composer Paola Prestini’s Oceanic Verses used vanishing Mediterranean tongues such as Griko, an Italiote dialect spoken in southeastern Italy, in Donna Di Novelli’s libretto. And in the United States, the Gullah Geechee Corridor Commission is mandated to capture and preserve as much as possible of the creole language and artistic expressions of the federally designated coastal corridor that encompasses the sea islands from Pender County in North Carolina south to St. Johns County in Florida.

“If you don’t have children’s books” in a given language, Sisulu says, “it’s very difficult” to sustain that tongue or patois. “And even some of the bigger languages, the most widely spoken languages, may not yet be fully threatened but they’re receiving the impact of the hegemony of English.  They’re being eroded. There’s too little children’s literature in the endangered languages and people are being paid too little to work in those languages.

“Everyone works professionally in English. In the digital world, everyone works in English. Unless you consciously invest in developing African-language content, then the languages suffer.”

There are some political camps that argue, Sisulu says, that endangered languages should be studied and taught in university settings. “And our argument is why make people start with a language at university when they can acquire the language effortlessly as children? We want to encourage linguistic diversity in primary school, so that by the time they reach high school, it’s a natural and normal thing.”

This is where Ouma Katrina comes in. “She is the queen of a small group of people called the N/uu,” Sisulu says. “And we’re working with her” and her family members “to make the first children’s books in the N/uu language.” 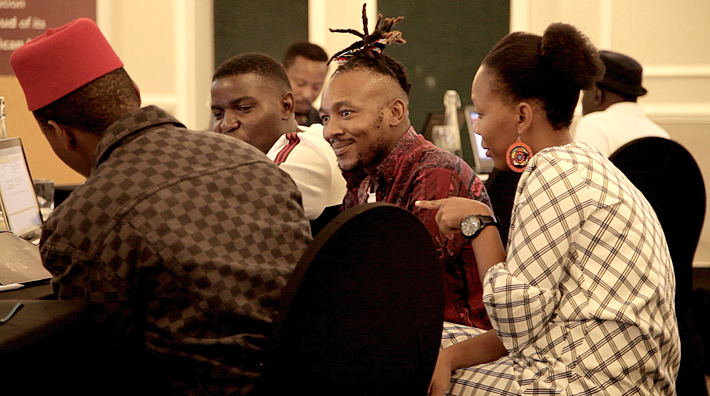 Editor Gontse Chaane, right, works with members of the Setswana group at the Puku workshop. Image: Puku’s ‘My Language, My Heritage’

The video that Puku (pronounced “POO-koo”) has produced about its process was shot at one of the foundation’s workshops held in March in Johannesburg. These are events that bring together writers, designers, and linguists to work as teams in generating indigenous content languages.

Writing in her home language “helps me as a woman to empower myself through teaching others and developing my skills as a Nama woman.”Dina Christiaan, author

If you have 10 minutes to watch, you’ll hear Queen Katrina explain to the participants that she and her three descendants are “the only people who can speak pure N/uu who are still alive.” You hear from Soweto-based Terence Maluleke, a visual developer and designer brought as art director in to create the imagery for the book. “I feel honored to be chosen to illustrate a story of the N/uu people,” he says.

Others brought into the workshop by Puku are writers and editors in the Nama, Setswana, and Afrikaans language groups.  In her commentary for the video, Sisulu explains that one effort of the foundation’s work is gathering catalogs of what children’s work actually is available: a database is needed, she says, “because you can’t build a reading culture if you don’t know what you have” in the way of content already available.

Author Dina Christiaan tells the camera that being a writer in Nama “helps me as a woman to empower myself through teaching others and developing my skills as a Nama woman. … Being part of the Nama tribe not only gives me joy, but it pleases me to know my roots.”

The Setswana group’s Gontse Chaane talks of how developing children’s literature in her language  is “about getting children to believe in themselves and reach for their dreams. Author Johannes Majiedt speaks of being involved in Puku’s workshop “to write my first children’s book” in Afrikaans. “It has always been my dream.”

“Right now we have a problem of our children not being able to speak in their home languages.”Lorato Trok, Puku Foundation

Part of the power of this video is that you’re hearing each of these workshop participants speak to the camera in their own beautiful, exotic languages, with good subtitles. It’s hard not to want to jump in and help, as you see these specialists conferring on their storylines and images.

Watch for the comments of Lorato Trok near the beginning and end of the tape. She’s the Puku Foundation’s senior language editor, and she says—in her native Setswana—”My mother and aunt used to tell us Setswana oral stories at home, stories like ‘Tselane and the Giant’ and ‘Fox and Hyena.

The workshop we see captured on video had funding from South Africa’s Swiss Embassy and the Pretoria-based National Heritage Council, and Tembelani Maso, the agency’s funding coordinator, speaks to the fact that, “These projects come with economic spinoff, and at the end it brings back our pride as a nation proud of its heritage.”

And yet, Sisulu tells Publishing Perspectives, the struggle to develop adequate and dependable financial support is the main hurdle.

“Our experience with the government,” she says, “is that they approve of what we’re doing. Politicians say, ‘What you’re doing is fabulous and our constitution promotes the languages.’ There’s praise and they talk about us in their policy statements.

“But when it comes to actually investing,” she says, the money isn’t there.

“And without actual investment, the work is volunteerism. Many of the people in these languages, when you think about it, are materially deprived” because some of these languages are spoken in the poorer parts of the region. “You can’t expect them to work as volunteers. It’s actually not quite fair.

“There’s a whole thing about digital and open access and providing tables”—the sorts of projects many politicians everywhere tend to get behind. “But where are you going to get the content?” Sisulu asks. “If  you want the content without paying the content providers,  you’re going to perpetuate exploitation.”

Literature specialists in many parts of the world will understand immediately what she’s saying. When economic times tighten, she says, “Grants to support social and cultural work are the first thing to go. We’re not actually a publisher and we’re designed to be nonprofit because we don’t feel that we should compete with the publishers.  At Puku, we want to aggregate information and market books on the aesthetic educational and literary value” of indigenous language content.”

“There’s too little children’s literature in the endangered languages and people are being paid too little to work in those languages.”Elinor Sisulu, Puku Foundation

She takes a breath. “And we’re struggling. We’re constantly looking for support for our work, and especially for Pukupedia,” the foundation’s growing online reference work that gathers books created for children in endangered languages of Africa. It’s called Pukupedia “because puku means book in one of our languages, Sisulu says. “We’re hoping to get more support for that.”

In addition to Elinor Sisulu of Puku, the panel at the IPA Africa Seminar in Kenya on “Lost Tongues” will feature: 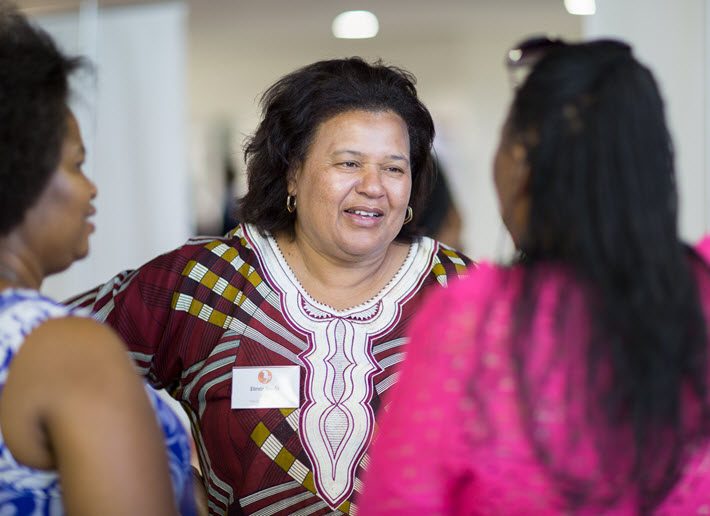