Sarah Odedina and Deborah Ahenkorah have launched a literary agency specialized in mentoring and promoting African middle-grade and teen fiction.

Following an announcement in April that Ghana-based publisher Deborah Ahenkorah and UK publisher Sarah Odedina would collaborate to identify African writers for international publication, the duo is taking this cooperation a step further. They’ve launched Accord Literary, an agency representing African writers of young adult and middle-grade fiction.

Accord Literary, according to its newly launched website, aims to “mentor, develop and encourage writers based in Africa writing books for young readers…and get their books into the hands of readers around the world.”

This is very much in keeping with the kind of work that Ahenkorah is doing through her literary nonprofit organization, Golden Baobab, which provides mentorship and a literary prize for African writers of children’s and YA books.

Ahekorah launched Golden Baobab in 2008 out of what she told Publishing Perspectives was “a deep frustration and disappointment” at the lack of black characters in the books available to African children. In 2015, she launched a publishing house, African Bureau Stories, to further her mission and publish the kind of books that were missing from the market.

“We have a massive responsibility to publish those diverse stories for the world,” Ahenkorah said. 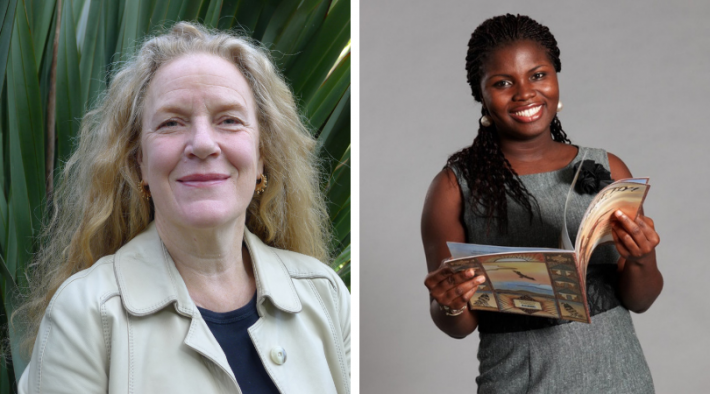 Odedina—currently an editor-at-large for Pushkin Press children’s and YA titles—and Ahenkorah bonded over their shared vision for bringing more diverse voices to readers when they met as a publishing industry event last year.

African writers … are a fantastic part of our global literary culture,” Odedina told Publishing Perspectives. “But there are not enough voices in that canon for children to enjoy.”

With Accord Literary, Ahenkorah and Odedina aim to broaden the range of African middle-grade and young adult fiction published in Africa and internationally. In addition to working with their existing network of contacts to identify writers, they’ve also issued a call for submissions.

Authors living and working in Africa are encouraged to submit their unpublished manuscripts written for middle-grade and teen readers to Accord Literary. The agency is looking for fiction in any genre, and the submission deadline is May 30.

According to Ahenkorah, “African Bureau will have African rights” to books represented by Accord Literary, “and license to other African publishers” as well as publishers outside of Africa.

This announcement comes just ahead of the International Publishers Association’s second seminar on African publishing, this year taking place in Nairobi on June 14 and 15, where Ahenkorah is scheduled to speak in a session on cultivating a new generation of publishing industry leaders.

One aspect of the business side of African publishing that both Ahenkorah and Odedina emphasized is its creative approach to current supply chain issues.

“There are many challenges in the market mainly to do with distribution, and publishers are incredibly creative about how they get their books to readers,” Odedina said, “from working with schools, having relationships with supermarket chains, running book clubs, and supporting literary events like festivals and readings.”

Ahenkorah agreed, saying, “I believe the real opportunity in book publishing across Africa is in redefining what book distribution can look like.”

Right now, the responsibility of getting books to readers mainly falls to the publishers themselves, and Ahenkorah said that the speed of innovation in this sector is “influenced by the publisher’s risk appetite and often by their background prior to their becoming publishers.”

For example, she said, one publisher with a supply chain background “has created an exciting online book distribution channel,” while another publisher with an advertising background “develops creative fun pop up shop stands to stand out in mainstream retail locations.”

Ahenkorah’s distribution approach for her own publishing house, African Bureau Stories, is to form partnerships.

“Especially when you are publishing fiction that does not always fit directly for the school market,” she said, “distribution becomes a wide-open space for innovation and creativity.”

More from Publishing Perspectives on diversity in publishing is here and on Africa is here.