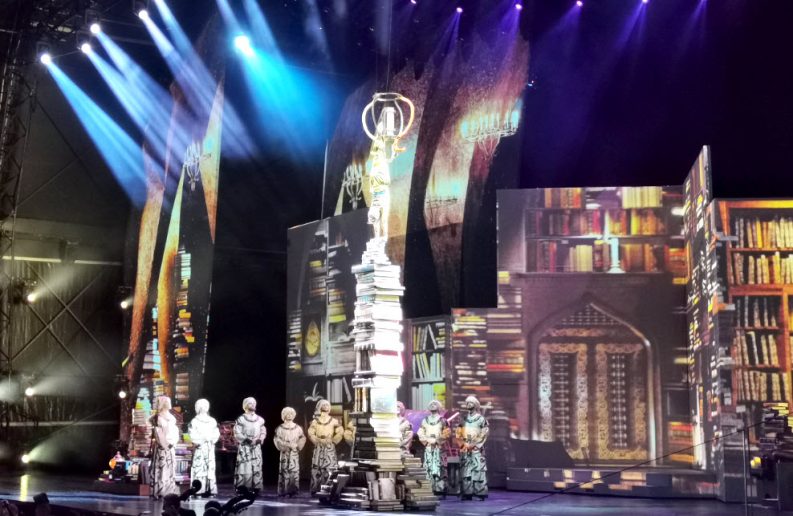 In its newly commissioned stage production, the emirate Sharjah has opened its year as UNESCO’s World Book Capital with a new tale for the ancient canon of the Arabian Nights. 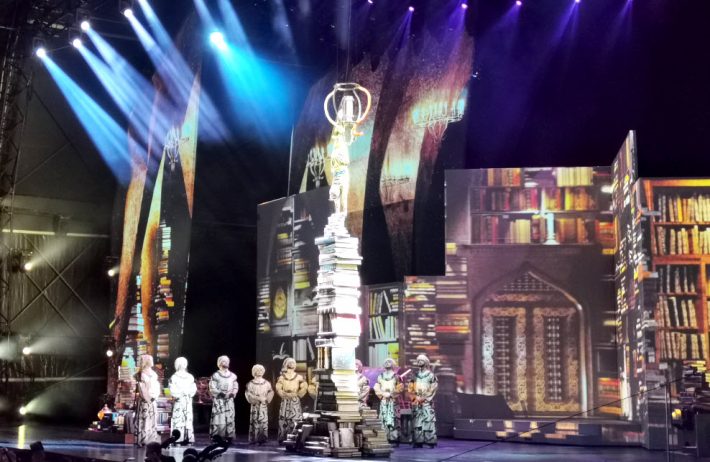 The magical tower of books near the end of ‘1001 Nights: The Last Chapter’ in its Sharjah premiere on April 23, the performance that ha dedicated the emirate to its mission as UNESCO’s World Book Capital: ‘Open Books, Open Minds.’ Image: Porter Anderson

Bodour: ‘So Dear to Our Hearts’

Thunder rolled, lightning flashed, great stones heaved themselves into the sky, and desert winds raised sandstorms over Mleiha as bodies soared through the air on Tuesday evening (April 23): new magic from an ancient world of storytelling.

The emirate Sharjah has opened its year as UNESCO’s 19th World Book Capital with the premiere of a specially commissioned, evening-length ballet, 1001 Nights: The Last Chapter.

Under the direction of Harout Fazlian, a 51-piece orchestra deftly delivered Canadian composer Maxime Lepage’s richly textured score Tuesday night, opened with the sinuous rise and fall of Rimsky-Korsakov’s timeless 1888 violin theme for Scheherazade—languid in the breezes off Khalid Lagoon at Al Majaz Amphitheatre in the heart of Sharjah.

After that, all else was new. The event is a spectacle of aerial and stage choreography, danced last evening without intermission in its performance for the emirate’s royal court and invited guests. Public performances continue through Saturday (April 27). If you’re in the area, ticketing information is here.

In the new tale, an ill and aging Scheherazade calls her three children—Kader, Amin, and Fairuz—and sends them on quests for hard-won magical objects she says she needs. By evening’s end, the audience learns that “the most beautiful book is the one that hasn’t yet been written.”

Scheherazade will always be with us, the libretto tells us, “as long as there are storytellers, writers, and readers, too.” 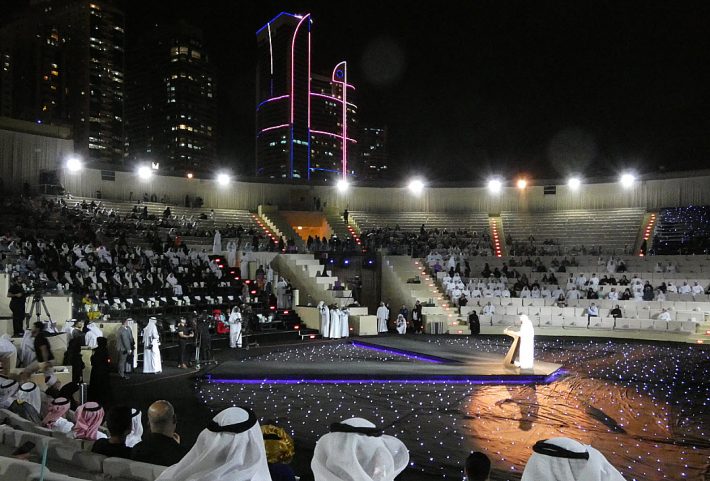 At the Al Majaz Amphitheatre in the center of Sharjah on Tuesday evening’s consecration of Sharjah as UNESCO’s 19th World Book Capital. Image: Porter Anderson

The production has been more than a year in the making and is specifically created for the advent of the World Book Capital in the first Arabian city to achieve the designation.

In a brief pre-show ceremony Tuesday night, a gracious handover was made to Sharjah by visiting representatives of Athens, the 2018 World Book Capital. The ceremony was watched over by the Sheikha Bodour bint Sultan Al Qasimi, the tireless vice-president of the International Publishers Association, founding president of the Emirates Publishers Association, and the founding publisher of the Kalimat Group, which presides this week over the 11th annual Sharjah Children’s Reading Festival.

And the moment here in Sharjah is a culmination of decades of work by its royal family, leadership designed to establish the UAE’s third emirate as a knowledge economy for the Arab world, a literature-centric hub of the Gulf’s importance in a contemporary global culture.

One major item of this emirate’s own quests now has been fulfilled. The world body has endorsed the relentlessly dedicated drive underway in Sharjah to make itself a beacon for those who share its focus on books, on reading, and on wisdom.

This lavish work of movement theater, singularly poised between 19th-century ballet and 21st-century entertainment, is an artistic evocation of that focus in a great idiom of Arabia—the 1,001 Nights of legend—in celebration and support of a mindful, literary world. 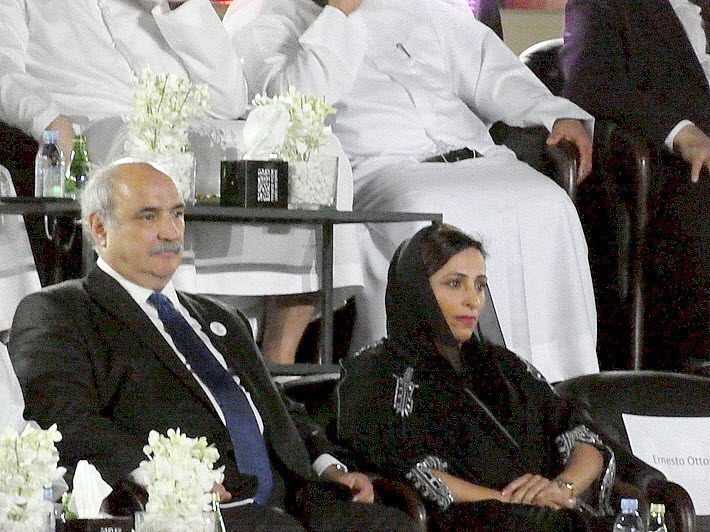 While the international trade book industry is the vehicle through which Sharjah has risen to world prominence as it has—with the establishment, for example, of its Sharjah Publishing City, a free trade zone for the international book business—there’s no mistaking the cultural and political messaging that’s integral to everything that the Al Qasimi regime is doing.

The slogan for this year’s World Book Capital is “Open Books, Open Minds.”

The intent is to leverage literature, education, and the force of the narrative arts for what Bodour described in a gala dinner with her international guests on Monday as “more understanding, more communication” between the rest of the world and Arab cultures.

In that dinner at the nature preserve on Al Noor Island, the emotion of so much effort was palpable when Bodour told her guests, “This dream, this goal, has been so dear to our hearts.” 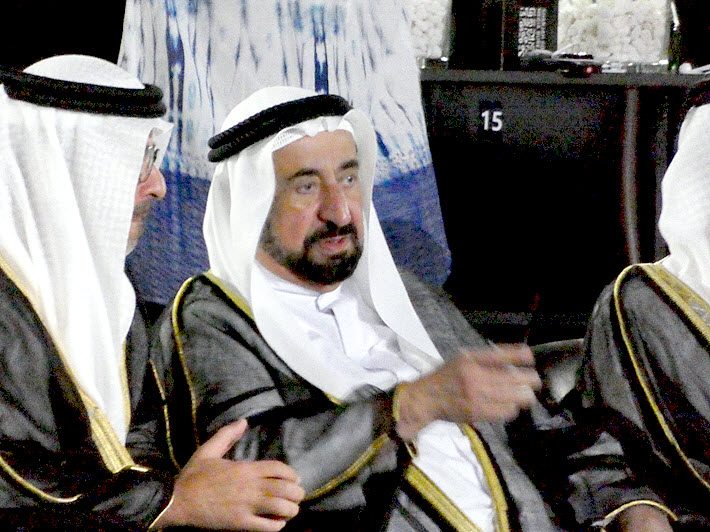 Bodour’s father, His Highness the Sheikh Dr. Sultan Bin Mohammed Al Qasimi—the author-ruler of Sharjah—has described his own intention in commissioning the new 1001 Nights production as being “not only to give the world a new benchmark in quality cultural entertainment, but we also want to create a precious memory point, a global reference when one would want to cite an example of the strength in multiculturalism and in our shared aspirations—be it five, 25, or 200 years down the line.”

There’s every chance that Al Qasimi has cinched that goal.

The elaborate production’s development is driven by Beirut’s Multiple International with the collaborative support of The 7Fingers (Canada) and Artists in Motion (Australia), and the soul of this telling of a “new legend” lies firmly in the Islamic Golden Age lore of the Arabian Nights.

With Lepage’s bouzouki-sparkling score in place, it’s Geneviève Dorion-Coupal’s choreography that captures the real urgency of this work.

In a spectacular fight sequence, in the bouncing taunts of a riddler’s demands, and in racing missions to find ink, a phoenix-feather quill, and the pages on which to write one’s truth, Dorion-Coupal sets her artists reeling through sea storms, reuniting separated lovers, and dropping “the chains of time” to rise, eternally young, into the sky for an airborne pas de deux. 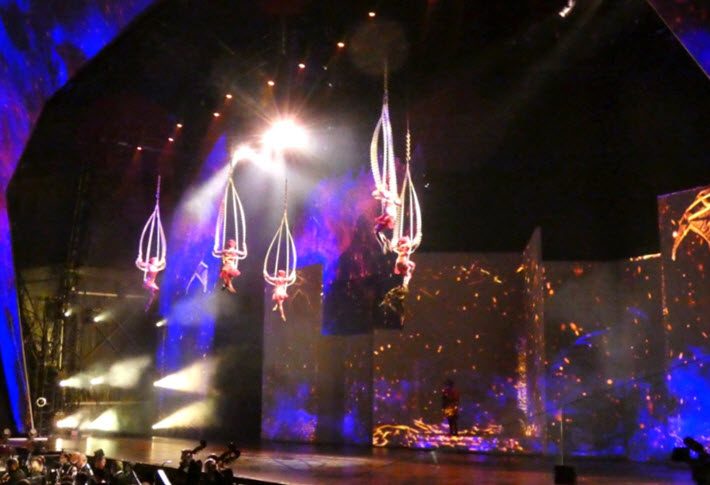 Aerial work for five artists who drop “the chains of time” and rise into the air in Sharjah’s new ‘1001 Nights: The Last Chapter.’ Image: Porter Anderson

While some might feel that the Cirque du Soleil ascents and flips aren’t necessary in a work of such classical influence and graceful adventure, Dorion-Coupal has managed to restrain the action so that flights of rope-twisting fancy can complement the action rather than running off with the evening.

Her movement vocabulary will remind many of the athleticism and quick energies of the Nederlands Dans Theater’s Jiri Kylian, and yet she can gather the pounding ritual power that some will recall from Paris’ Ariane Mnouchkine’s setting of the Oresteia.

Watch how elegantly she translates her artists’ looping moves—the stately, bowing honorifics of past eras’ extravagance—into Lepage’s fondness for a tango in the latter part of the evening.

Dorion-Coupal is blessed with a fine ensemble of movement artists, and never puts a foot wrong. She’s a soul mate, one senses, of the intents and inspirations that inform Bodour’s own creativity in evoking Scheherazade.

Standing on the Stories 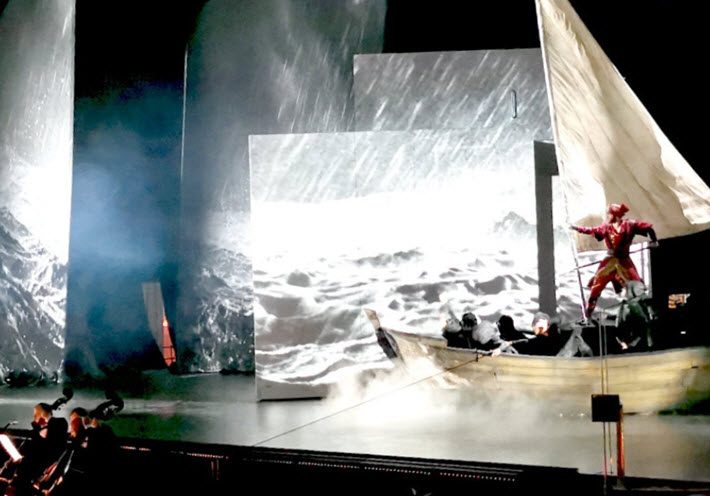 You’ll find no spoilers here, except to tell you that by evening’s end, an ascent up a tower of books results in a stage-wide cascade of pages and text and calligraphy and whispers of the ages.

The creative staff assembled by directors Philippe Skaff and Richard Lindsay knows what it’s doing. You’re finally reminded that, like the show’s climber of books, our industry and its readers all must stand on the stories of ages—and create new ones, both to survive and to really know each other.

Tuesday’s opening was particularly well executed, a complex amalgam of set projections, gymnastics, music, modern dance, and lighting that arrived without noticeable hitches. This is a deeply professional and disciplined production that should have a solid future on international stages as a dramatic emissary from Sharjah of that “dream” that Bodour and Sheikh Al Qasimi want to remind us about.

And Sharjah now is the seat of world literature’s importance, thanks to UNESCO’s rightful designation. The emirate has an aggressive plan for its programming and outreach to come.

The Athenians did their job well last year. Next year, Kuala Lumpur will take over from the UAE.

But until April 2020, Sharjah is our World Book Capital, home to the imagination and the truths of the literary arts. We’re in eloquent, generous hands. 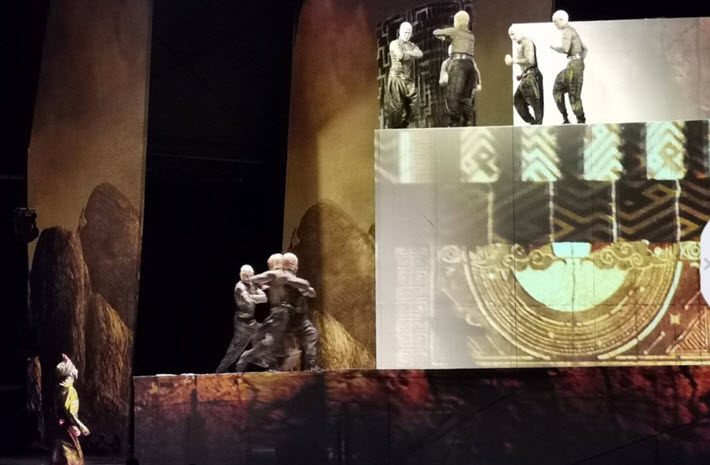 More from Publishing Perspectives on Sharjah is here, more on the UNESCO World Book Capital program is here.