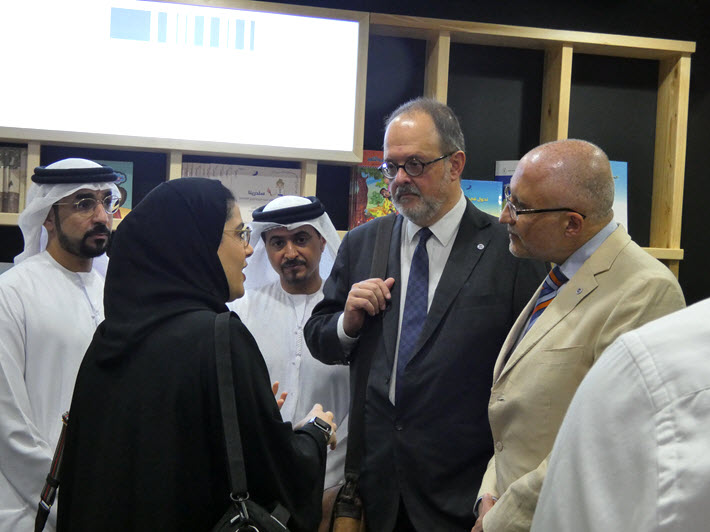 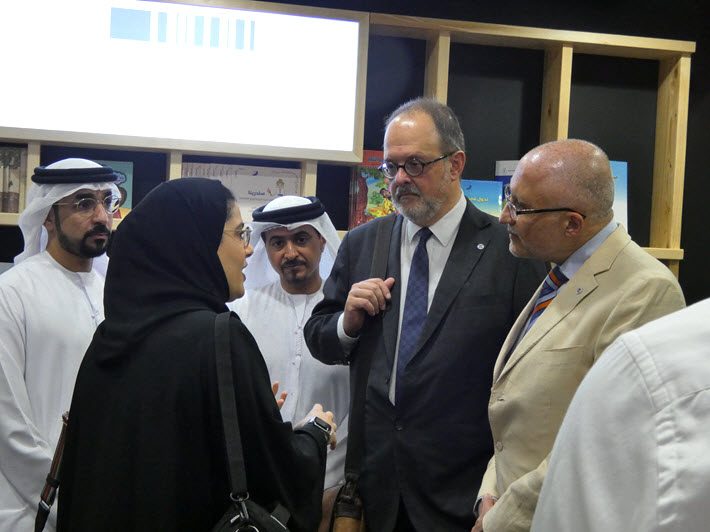 With the 11th Sharjah Children’s Reading Festival on track to meet or exceed last year’s attendance figures of some 306,000 visitors, the visit today (April 22) by Hugo Setzer and José Borghino quickly took on the dynamics of a congratulatory review of the winning team.

Setzer is making his first visit to Sharjah as the newly installed president of the International Publishers Association, and he’s being accompanied by Borghino, the IPA’s secretary general, during a week that includes not only the children’s reading festival but also the opening ceremonies for Sharjah’s year as UNESCO’s World Book Capital.

The concept of the World Book Capital was originally the suggestion of Pere Vicens, in 1996 the president of the IPA, and the program has continued to hold the favor and support of the international publishers’ body.

This week’s events include an invitational gala dinner on the eve of World Book Day, and on Tuesday (April 23), the revelation of a new monument on Al Noor Island, followed by what promises to be an opulent opening ceremony at Sharjah’s Al Majaz Amphitheatre on its own peninsula in Al Khan Lagoon.

Setzer and Borghino were guided by Ahmed Al Ameri, chair of the Sharjah Book Authority, which produces the children’s book festival, and by its director of fairs and festivals, Khoula Al Mujaini. 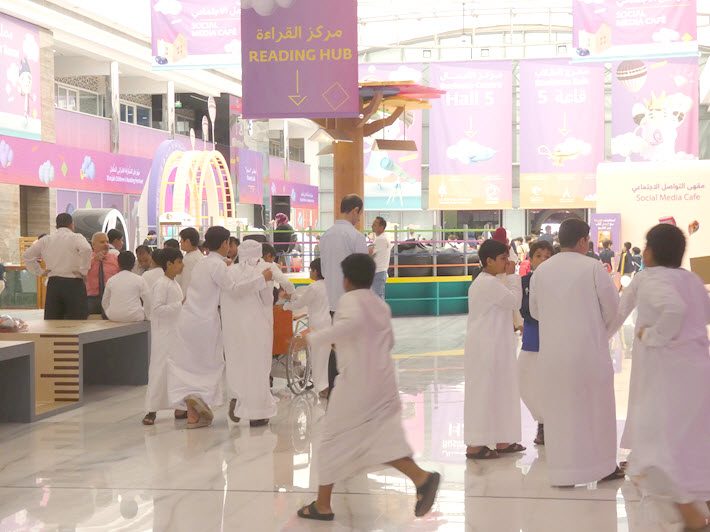 Al Mujaini makes the point that this is very much a reading festival and not quite the book festival that some might expect. Its programming is heavily interactive, supporting youngsters in discovering and testing their own creative responses.

Much of the show—with 167 publishers participating from 18 countries—is set in the brightly lit Sharjah Expo Centre, its wide concourses filled with dashing, exuberant schoolchildren.

But in the most dramatic exhibition of the event, “Traveling the Silk Road” brings things to a hush, the beauty of ancient culture enveloping visitors with the mysteries of a time “when the latest ideas traveled not by wireless networks but by camel.”

Kids slow to an awed slow walk as they they’re dwarfed by three two-humped camels laden with goods. They’re first shown how silk was made at the Chinese end of the long route, then brought up to speed on paper, textiles, hand-blown glass, and more treasures in play between 600 and 1,200 AD.

A display of traditional instruments similar to those of the Silk Road’s Xi’an lets youngsters hear the music each made. Another section offers the scents of fragrant oils sold by merchants working the route. Another demonstrates the astronomer’s astrolabe, used for telling time by the stars in Baghdad.

A large light-table map allows students to plot various routes and known groupings of goods that moved along the Silk Road, as well as Marco Polo’s sea voyage, as well. And at each stage, of the exhibit, a visitor’s “passport” is stamped by docents—a gratifyingly friendly immigration service at work, tempting children to think about travel. 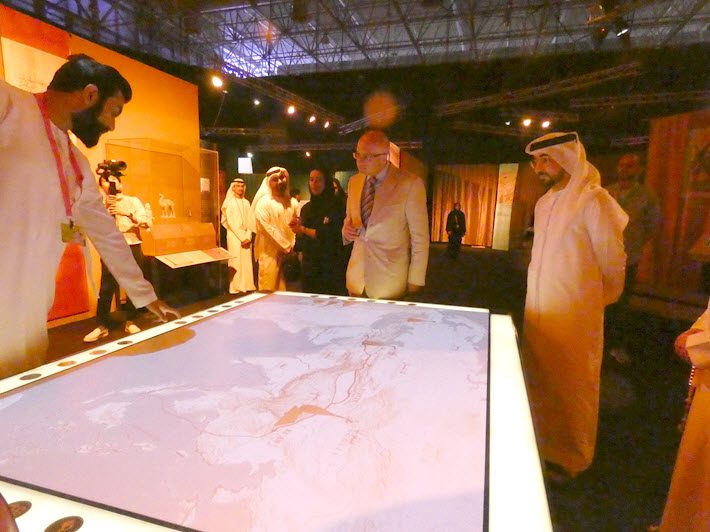 In many of the reading festival’s activities and enticements, the connection the organizers are working to make is very clear.

For example, a superb “submarine” with eight doorways out onto the floor of the show has surfaced in the “Voyage to the Deep” exhibit with complicated detailing of Old World dials and piping—Jules Verne would be pleased—and there’s video of sea creatures visible through portals from the inside.

In other cases, workshops are housed in a series of plexiglass enclosed rooms so that students can focus on creative tasks and challenges related to stories and tales from their curriculum.

Even in the coming Tuesday night (April 23) spectacle at the Al Majaz Amphitheatre, the theme is straight out of literature, promising the last of Scheherazade’s 1,001 Arabian nights to spur the curiosity of the youngsters racing from exhibit to exhibit.

And the keen interest with which Setzer is taking in what the young people of Sharjah has a lot to do with the contemporary stories he knows are playing out today in geopolitical tensions and daily, often hourly, challenges to the truth from world leaders who offer fabricated tales as reality to fans who want too much to believe them. 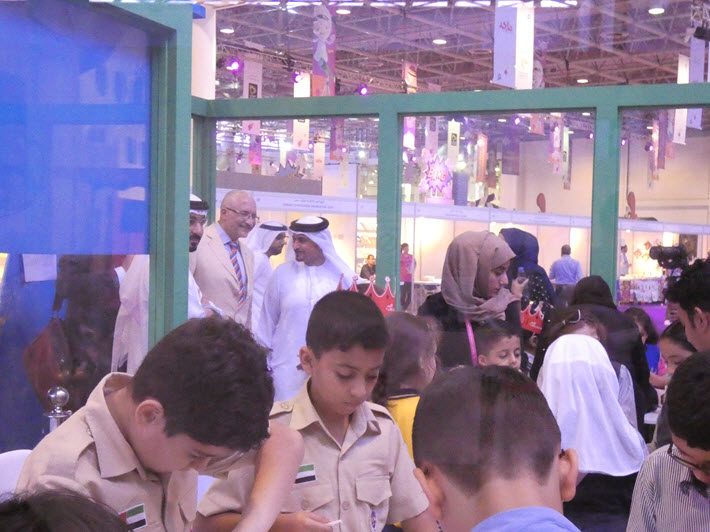 ‘Books That I Can Trust’

In his first address as president of IPA, made during the London Book Fair’s Freedom to Publish Seminar in March, produced by Jacks Thomas and her team in association with the IPA’s leadership, Stetzer said in his keynote, “Freedom to publish is an area where there are so many crossovers with freedom of speech and freedom of the press. The quest for the truth sees many journalists also pay the price.

“My own country, Mexico, has been described as the deadliest country for reporters outside of a war zone. Since 2000, at least 144 journalists have been murdered according to Mexico’s National Human Rights Commission.

“But Europe is not immune either: look at the case of Maltese journalist Daphne Caruana Galizia who was first threatened with libel and then killed in a car bombing in October 2017.”

And, of course, since Setzer gave that address, the journalist Lyra McKee has been shot and killed during rioting in Londonderry, an occasion that has brought official outrage to the fore in both Northern Ireland and the Irish Republic.

Setzer, like the organizers of Sharjah’s children’s reading festival, know that publishing today has a new role to play in the promotion of truth over hypocrisy and malfeasance.

“The world is divided,” Setzer said in his address in London. “I feel like I’m surrounded by negative noise. But I know that every time I have this feeling I can turn to books. Books that I can trust. Books that can tell me the truth.”

And the effort to instill that understanding of the potential value of books in these youngsters at the Sharjah Expo Centre is noisy, too, but the noise here is positive. As soon as Borghino entered the space this morning, the first thing he noted was the sheer decibel level in the huge exhibition center, the place is rattling with laughter and learning. 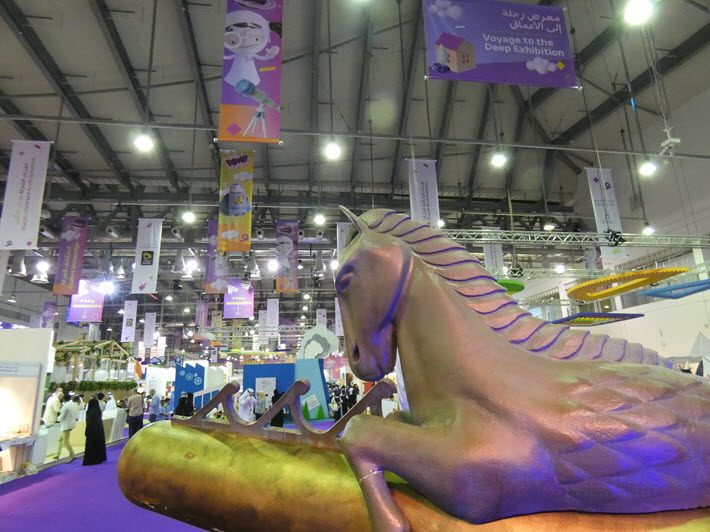 At the Sharjah Children’s Reading Festival, part of the ‘Voyage to the Deep” exhibition based of the work of Jules Verne. Image: Porter Anderson

More from Publishing Perspectives on Sharjah and its publishing programs is here.