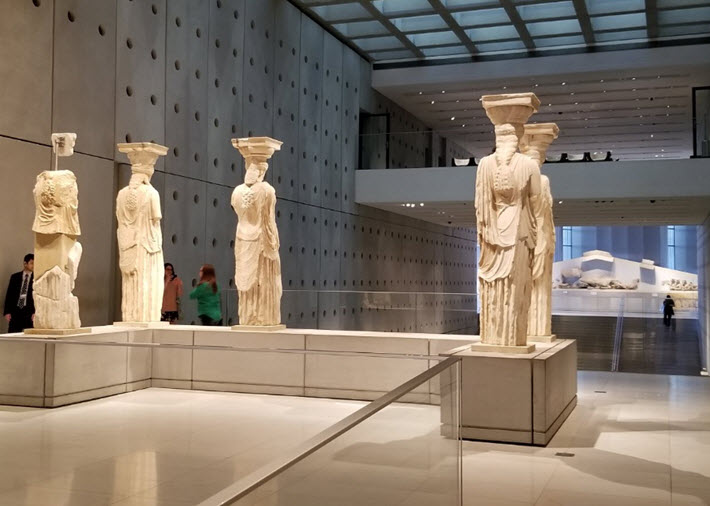 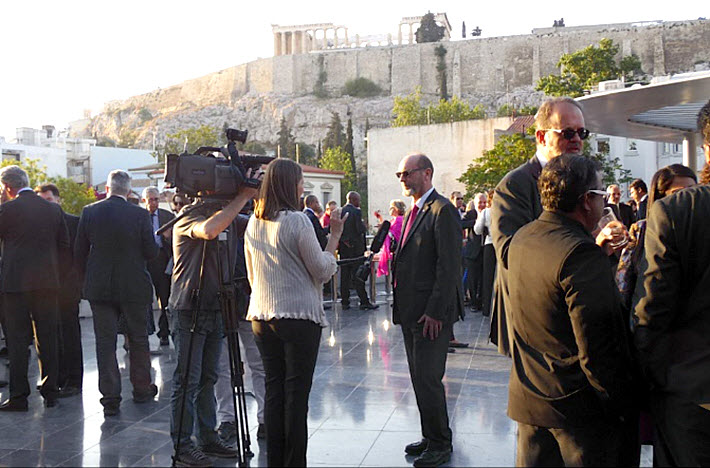 ‘The Common Heritage of the World’

On Monday evening, World Book Day (April 23), the magnificent Acropolis Museum was closed early and ringed with security forces so that Prokopis Pavlopoulos, president of Greece, could join George Kaminis, the mayor of Athens, in consecrating the country’s and the city’s unified intention to produce more than 240 events between now and this time next year—an international promotion of books and a nationwide engagement in reading.

Invited dignitaries, guests, and media members passed through security screenings into the eerily silent museum with its patient treasures from the Parthenon and surrounding excavations. In this land of Homer, everyone smiled at the mayor’s first line: “The question is not why Athens has been chosen for this honor, but why it took so long for it to happen.”

Of course, “so long” has almost no meaning in the vast millennia of Greece’s history, a profound legacy that glows luminous each night as the glassed top floor of the museum radiates light, answering the lit columns atop the Acropolis. The World Book Capital program’s concept is only some 22 years old, having been launched in 1996 at the suggestion of the International Publishers Association (IPA). In 2001, Madrid became the first city to call itself a World Book Capital.

“The question is not why Athens has been chosen for this honor, but why it took so long for it to happen.”George Kaminis, Mayor of Athens

And over the years, a symbolic handoff tradition has been growing in which each successive city passes the baton to the next, not unlike the ceremony seen annually at the Frankfurter Buchmesse, as one Guest of Honor country gives over to the next.

In Athens, Conakry’s chief of staff Moundjour Cherif was present, to hand off to Athens.

Representing the “other side” of the transfer, the UAE’s Sheikha Bodour bint Al Qasimi was there to honor Athens—which on World Book Day 2019 will hand off to Sharjah, the first Arabian Gulf city named a World Book Capital. Bodour was accompanied by Mohammed Meer Al Raesi, recently appointed the UAE’s ambassador to Athens.

For Conrakry, Sharjah has helped support the restoration of Guinea’s Djibril Tamsir Niane Library, and also has contributed to textbook provision and distribution in the country, as well as participating in the donation of 2,000 much-needed books. 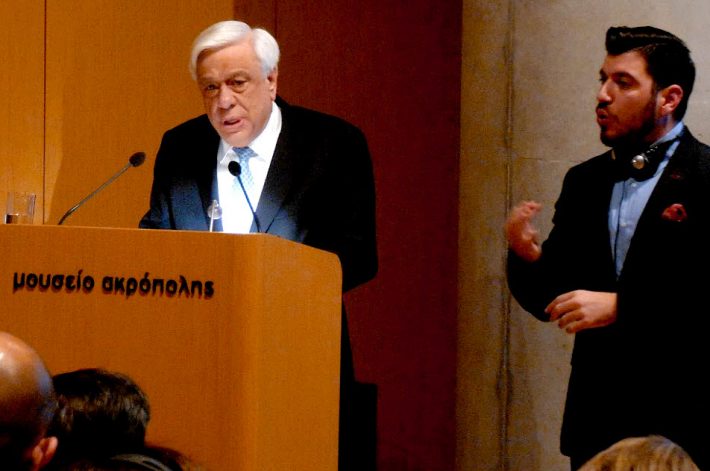 Hosted by the Greek journalist and anchorwoman Maria Houkli, the official program was a simple one, set in the nine-year-old museum’s auditorium. The session would end with the music of a flute quartet, but it was memorable chiefly for Pavlopoulos’ impressive, forceful commentary.

“Athens actually merits this honor and we will vindicate the choice of Greece because it is here that the largest library was established, and we should remember that even the Library at Alexandria was a Greek library.”Prokpois Pavlopoulos, President, Hellenic Republic of Greece

Speaking without notes, the Greek president referred to the “sacred space” of the museum, which stands over an excavation of Byzantine-era Athens. He referred us to specific pieces in the museum collection, including a sculpture of Athena from around 468 BC.

“I don’t think there is any work of art,” Pavlopoulos said, “that can represent better what Athens was then and what it aspires to be today.”

The subtext, of course, as the 200 or so invitees in the room knew, was about the Greek government debt crisis that started about the time the new museum was being dedicated and led to 12 wrenching rounds of reforms and international bailouts through 2016.

Today, Athens bustles again with new energy and the ebullient crackle of its famous municipal personality, but the price has been heavy. And it’s easy to see that being selected as World Book Capital is a fine signal of Greece’s return to world society and its rightful cultural leadership.

Pavlopoulos referred to how “It is here that ‘the citizen’ was born”—the concept of democracy’s essential player—and how “the common heritage of the world” is carried forward by each an educated member of a culture, a reader.

“Athens actually merits this honor,” Pavlopoulos said in his resonant basso, “and we will vindicate the choice of Greece because it is here that the largest library was established, and we should remember that even the Library at Alexandria was a Greek library.”

In the digital age, Pavlopoulos said, Greece can do no less than find her footing in delivering to the country’s population and visitors in the next year “the powerful potential that books do possess.”

Borghino and Denison: ‘The Grid’ 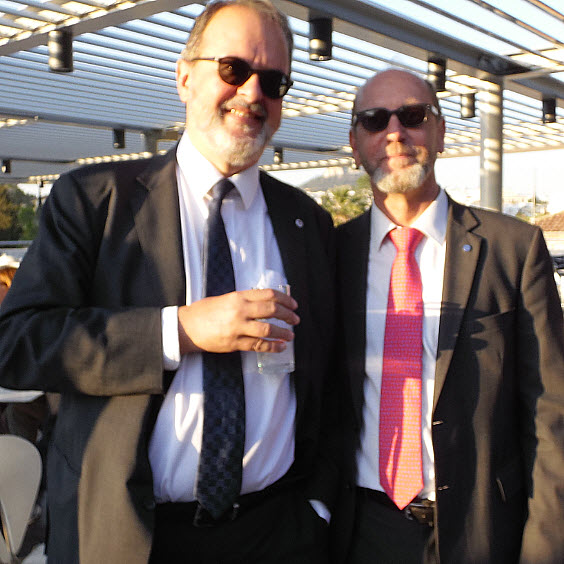 During the ceremony’s reception on the museum’s terrace in the shadow of the Acropolis and amid late-day breezes from Piraeus, Publishing Perspectives spoke with Ian Denison, UNESCO’s chief of publishing and branding, and José Borghino, IPA’s executive director, about how a World Book Capital is chosen.

The program has moved over the years from Beirut to Ljubljana, from Port Harcourt to Incheon, from Wroclaw to Conakry.

“We have a grid of criteria,” Denison said, “and within the grid, we have sub-criteria. And what we’ve done is make sure that freedom of expression is the highest-rated criterion.”

As Borghino explained, the IPA’s leadership in the freedom to publish, with its annual Prix Voltaire for the most courageous champions of expressive rights, is represented in the selection of Greece by a major component of Athens’ program which will address the reading needs of the country’s many refugees.

“In terms of the honor, every country named a World Book Capital appreciates it in a different way and needs different things” from UNESCO,  Denison said. “A place like Conakry, for example,” he said, “needs more infrastructure support,” as in the library-rebuilding efforts that Sharjah has assisted Guinea with.

“We felt that in economic times that were so difficult” in Greece, “to be focusing as they were on migrant children and refugees was something quite amazing.”Ian Denison

“While a place like Athens,” Denison said, “doesn’t need that kind of support, it needs recognition of what it’s been through” in the past decade, and that a corner has now been turned.

“We felt that in economic times that were so difficult” in Greece, he said, “to be focusing as they were on migrant children and refugees was something quite amazing.”

“And then Sharjah, of course, is a different story,” Borghino said, with its generation of effort led by its royal family to found a knowledge-based culture on reading and books.

“The story for each World Book Capital,” Borghino said, “is positive. But each is positive in a different way.”

“It’s actually a very joyous thing,” Denison said. “We’re now about to see what new stories the Athenians are going to come up with in the next year.” 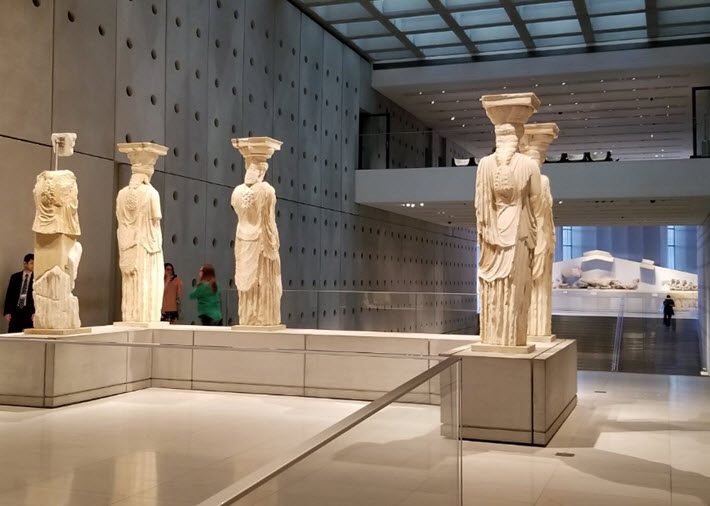 The original sculptures from the Erechtheion in their new home at Athens’ Acropolis Museum. The missing Caryatid is one of the “Elgin Marbles” removed by the British in the 19th century. Image: Porter Anderson