On Thursday (November 16), a two-year partnership between the Canada Council for the Arts and the Salon du livre de Montréal supported the eighth Translation Rights Fair held in association with the salon’s professional program. Early comments about this year’s right fair are markedly upbeat.

Mona Kiame, program officer at Canada Council and organizer of the rights fair, tells Publishing Perspectives, “The goal of the partnership” with the Salon du livre “was to give the Translation Rights Fair the opportunity to evolve and the capacity to respond to the specific professional development needs of publishers.”

This year, the rights event drew more 35 anglophone publishers—10 more than in 2016. Forty francophone publishers participated in the fair. Representatives of these companies came from many parts of Canada to network and potentially plan their next translation projects.

“ANEL is pleased to witness the growing Translation Rights Fair and the effervescence of the book industry, which is taking bigger steps every year.”Richard Prieur

Canada Council’s role is not only to connect publishers, but also to provide funding for translation projects. By combining the Translation Rights Fair with the Salon du livre de Montréal, publishers are offered the potential for profitable trading, not just for exhibition and networking.

The rights fair was followed again this year by a professional program conference on Friday. Anglophone publishers who arrive from as far away as Newfoundland and Vancouver were encouraged to stay longer and observe some of the Québécois culture around them.

“For the first time”, says Kiame, “the conferences were all simultaneously translated.

“By offering the Translation Rights Fair in the context of a book fair,” she says, “anglophone publishers can circulate at the fair, stay longer, see more publishers. In addition, ANEL,” Association nationale des éditeurs de livres, “held a parallel event through its fellowship program, hosting German [and international] publishers, so that we also saw an opportunity to lay some groundwork for Canada FBM 2020,” the Guest of Honor designation for Canada at the Frankfurter Buchmesse. 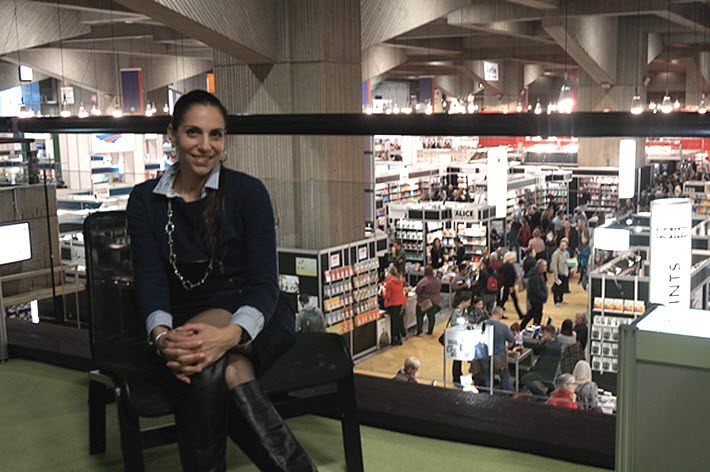 , the executive director of ANEL—interviewed here—says that his organization’s fellowship program welcomes 10 publishers each year. In addition to that initiative, the association is partnering with the 2020 Frankfurt Guest of Honor leadership to include five German publishers and three translators in that year’s .

“The fellowship, now in its fifth year, Prieur says, “is doing quite well. For the first time we’ve expanded it to include francophone independent booksellers from Europe, and they’re traveling from Belgium, France and Switzerland as a way to stimulate growth of French Canadian and Québécois book sales abroad. ANEL is pleased to witness the growing Translation Rights Fair and the effervescence of the book industry, which is taking bigger steps every year.”

Chélanie Beaudin-Quintin, rights director at Éditions Michel Quintin, says the Translation Rights Fair has allowed her publishing house to translate and distribute at least three series since they began participating.

“We have three partners now in English Canada—Oasis, Fitzhenry and Whiteside, and Bookland—and that’s in great part because of the rights fair. Having it during the Salon du livre requires a bit of extra work in this busy time of the year, but the 30-minute meeting formula is quite efficient.

“The rights fair gives us a continuity in our partnerships, solid exchanges. It allows us to deepen our ties with anglophone publishers and be more efficient.”

“The Salon du livre de Montréal has gained greater visibility in the community of anglophone publishers. These publishers are discovering the culture of Québec and French Canada, and there’s even more appreciation of our linguistic duality.”Mona Kiame

And organizers take it as a good sign that translation seems these days to be less an afterthought than in the past for Canadian publishers.

“There’s a trend that we’ve observed at Canada Council for the Arts” she says, in which “publishers are now including translated books” in their editorial plans. Some of the English-language publishers featuring translation are Annick Press, Anansi Press, Coach House Books, and Turnstone Press.

Kiame notes that all of this helps build momentum toward a growing dual-language publishing market. For the first time last year, she says, the demand for translation funding outstripped the available budget at the council. As a result, she says, the administration is reviewing its programs to better respond to publishers’ needs.

One part of the social backdrop for these dynamics is a growing number of bilingual Canadians. According to recent census news reported in August, Canada has never been more English-and-French bilingual, the trend rising from 12.2 percent in 1961 to 18 percent of respondents in 2016.

“The Salon du livre de Montréal has gained greater visibility in the community of anglophone publishers,” Kiame says. “These publishers are discovering the culture of Québec and French Canada, and there’s even more appreciation of our linguistic duality.

“In the end, we’re all gaining perspective on who we are as a nation within our differences, and acknowledging our similarities.”