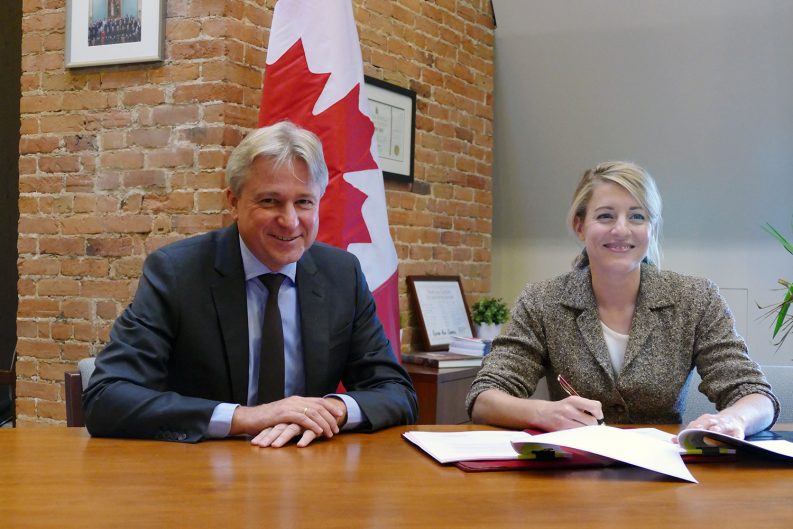 Enthusiasm and national pride mark a signing ceremony at which Canada confirms its participation as Frankfurt Book Fair’s 2020 Guest of Honor country. “Canada brings to the world stage a strong commitment to its bilingual tradition and embraces the diverse immigrant cultures that contribute to its society. “Juergen Boos, CEO, Frankfurt Book Fair

In anticipation of Thursday’s announcement, Canada already has formed an organizing committee, CanadaFBM2020, to begin preparing its Guest of Honor (GoH) program. The committee is made up of representatives from both the Association of Canadian Publishers (ACP) and Association nationale des éditeurs de livres (ANEL), and is supported by export associations Livres Canada Books and Québec Edition.

“The Canadian publishing industry has worked together for the past three years on this project, so it is with great enthusiasm that we welcome this fantastic news,” said Caroline Fortin, president of Éditions Québec-Amérique and president of the CanadaFBM2020 Committee, at the signing ceremony.

“The Frankfurt Book Fair is the international hub of the publishing world and being its GoH will provide extraordinary opportunities to showcase our world-class literature, books, and Canadian culture.” ‘Open the Door to New Audiences’

Indeed, a prepared statement from CanadaFBM2020 reports that Canada’s “book industry is already focusing its efforts on planning a successful and impactful event, and has consolidated support across Canada for the project.”

Publishing industry representatives anticipate that the heightened global visibility in Frankfurt will “open the door to new audiences and markets for Canadian books, digital content, film, and academic work, as well as for arts, culture, and tourism.”

Matt Williams, president of the ACP and VP of publishing operations at House of Anansi, said, “In the context of a highly competitive market in which Canada’s cultural industry and goods need to stand out at both the national and international level, Canada’s participation as a GoH at the 2020 Frankfurt Book Fair represents an important, unifying, and exceptional business opportunity.”

For international publishers wanting to build more connections with Canada, now is a good time. According to Livres Canada Books, the number of Canadian publishers has tripled in the last 25 years, and nearly 70 percent of the country’s publishing companies are domestically owned.

“Our government is committed to ensuring that readers everywhere have access to a wide range of Canadian-authored books, and I look forward to showcasing Canada’s book industry at the Frankfurt Book Fair in 2020.”Mélanie Joly, minister of Canadian Heritage

“Given the high levels of cultural exchange between Canada and Europe, we believe there is strong international interest in learning more about Canadian publishers, authors, culture and media,” said Boos.

”Canada brings to the world stage a strong commitment to its bilingual tradition and embraces the diverse immigrant cultures that contribute to its society. We are pleased that Canada accepts this invitation to showcase its rich literary, cultural, and linguistic heritage to global industry representatives.”

Canada’s book industry also benefits from the strong support of the national government. Earlier this year, the Canada Council for the Arts announced a budget increase of $40 million in federal funding for 2016-’17, with an additional $35 million for each of the following four years, according to a news release from the ACP.

The Canada Book Fund, an initiative of the Department of Canadian Heritage, supports some 300 Canadian book publishers and organizations with its $39.1 million annual budget to ensure “access to a diverse range of Canadian-authored books nationally and internationally.”

“Our government is committed to ensuring that readers everywhere have access to a wide range of Canadian-authored books, and I look forward to showcasing Canada’s book industry—as well as our country’s artistic and cultural sector—at the Frankfurt Book Fair in 2020,” said Joly at Thursday’s signing ceremony.

“This is a fantastic opportunity to enable Canada’s artists and cultural entrepreneurs to maximize their full export potential, to help increase their competitive position on the international stage, and to ensure long-term sustainability, which will contribute to Canada’s overall economic and social prosperity.”

Since 1976, Frankfurt Book Fair has hosted a Guest of Honor program in order to showcase the literature and culture of a particular country or region, and to strengthen that country’s ties with the international publishing community. There is a particular emphasis on expanding the Guest of Honor’s rights and licensing trade, a goal which is supported with translation funding, cultural events, and networking opportunities.