The 2016 winner of the IPA’s Prix Voltaire has ended a 10-year prison sentence, but remains barred from leaving the Saudi kingdom. 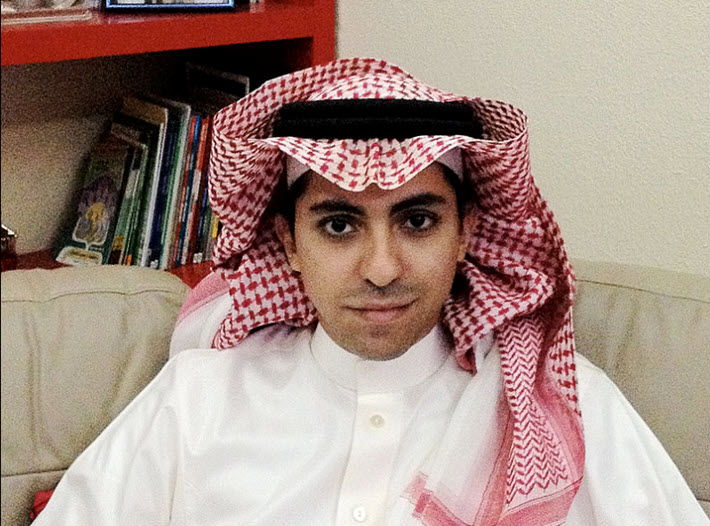 Raif Badawi had been imprisoned for almost four years when he was named the 2016 winner of the International Publishers Association’s (IPA) Prix Voltaire.

After 10 years in prison, Badawi—now 38—has been reported freed.

The IPA, holding its 31st International Publishers Congress in London that year parallel to London Book Fair, was joined by Maureen Freely, then the president of English PEN for the presentation of the Prix Voltaire. She and the IPA’s president at the time, Richard Charkin, presented the 10,000-Swiss-franc award to Badawi’s wife, Ensaf Haider, who had been granted asylum in Canada.

The news has not come without disappointment, however, as the Saudi authorities appear to have kept a 10-year travel ban in place for Badawi, seemingly keeping him from leaving the country for a decade to join his wife and their children in Canada.

Kristenn Einarsson, the chair of the IPA’s Freedom to Publish committee—which awards the Voltaire—tells Publishing Perspectives, “It was a great relief when he was released.

“If there was some degree of decency in the Saudi regime, they should immediately let him be able to join his family abroad.”

Her tweets announcing #RaifIsFree / #RaifEstLibre have been retweeted hundreds of times.

Immediate objections, like Einarsson’s, have followed the news that Badawi, though out of prison, is not allowed to leave the Saudi kingdom for a decade.

Ben Hubbard at The New York Times captured some of the uncertainty that initially surrounded the conclusion of Badawi’s long prison term. Hubbard on Friday wrote, “It was not immediately clear why Badawi, who was sentenced in 2014 to 10 years in prison, a fine of more than a quarter-million dollars, and 1,000 blows with the cane, was released on Friday. Nor was it clear if he would be free to travel to Canada to reunite with his wife and children.

“Saudi Arabia has barred other high-profile former prisoners from leaving the kingdom,” Hubbard wrote, “presumably to avoid the bad press they might generate by speaking publicly about their experiences.”

In their report for Reuters, Aziz El Yaakoubi and Ismail Shakit have echoed this element of the news, writing on Friday, “Saudi blogger Raif Badawi was released from prison on Friday after spending 10 years behind bars, his wife said, but rights groups said he is still banned from travel for another 10 years.” Both Amnesty International and ALQST, a Saudi Arabian human-rights group, write El Yaacoubi and Shakit, have said that Badawi is banned from traveling.

Badawi’s Release Welcomed by Many

Despite the factor of the travel ban, the news of Badawi being out of actual incarceration has been welcomed in many parts of the world, including a message from the Canadian prime minister, Justin Trudeau.

I’m relieved that Raif Badawi has finally been released. My thoughts are with his family and friends who have been tirelessly advocating for him for nearly a decade. Our officials are now working to seek clarity on the conditions of his release.

Badawi having been charged with “insulting Islam” when he wrote about Saudi religious leaders, a statement of satisfaction has been made by Nadine Maenza, chair of the United States Commission on International Religious Freedom, a US government entity, saying, “We are thrilled by the news of Raif Badawi’s release after 10 long and unjust years in prison, and call on Saudi Arabia to cease its persecution of those who exercise freedom of religion or belief. We remain deeply concerned for the wellbeing of his lawyer, Waleed Abu al-Khair, and hope that Saudi Arabia will also allow him to be reunited with his family soon.”

At Deutsche Welle, Justin Shilad of the Committee to Protect Journalists writes in an op-ed, “Raif Badawi may be free, but Saudi authorities continue to impose a travel ban on him and others, subjecting him to another unbearable decade of separation from his family. Meanwhile, the Saudi government continues to enjoy the military support of the United States and European Union member-states, even as other journalists languish in prison in deplorable circumstances. The international condemnation that followed the first round of Badawi’s lashings has subsided, as Saudi authorities’ violations against journalists multiplied.”

Badawi was taken into custody in Jeddah on June 17, 2021 at age 28, as Amnesty International has it, and was convicted for founding Free Saudi Liberals, a site that has since been closed.

After an appeal in December 2013 from Badawi’s (also imprisoned) attorney, the sentence in May 2014 reportedly was expanded to 10 years in prison; 1,000 lashes to be carried out over 20 weeks; a fine of some US$250,000; a 10-year travel ban; and a 10-year ban from participation in media work, including writing, after any release.

As it would happen, he was given 50 lashes in a public flogging in January 2015. It’s believed that the international public outcry at the time may have helped to spare him what may have been another 950 lashes.

In 2016, when the IPA’s Freedom to Publish committee selected Badawi to receive the Prix Voltaire, the sponsors of its cash award were:

Fifteen prizes preceded the Prix Voltaire for Badawi, including the PEN Pinter Prize (2015) and the European Parliament’s Sakharov Prize (2015).

Earlier this month, there was some confusion in humanitarian-activist circles about the anticipated release. On March 4, Amnesty International issued a sharp protest through a statement from Heba Morayef, the organization’s regional director for the Middle East and North Africa. 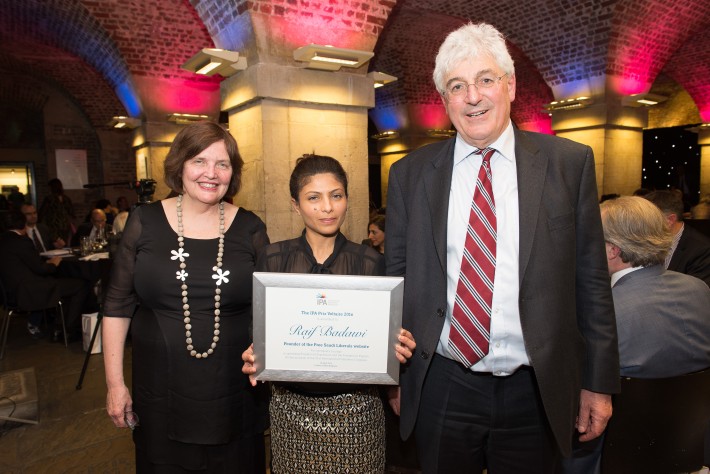 This is Publishing Perspectives’ 48th awards report published in the 51 days since our 2022 operations began on January 3.

More from Publishing Perspectives on freedom of expression is here and more on the freedom to publish is here. More on the Prix Voltaire is here, and more from us on the International Publishers Association is here.