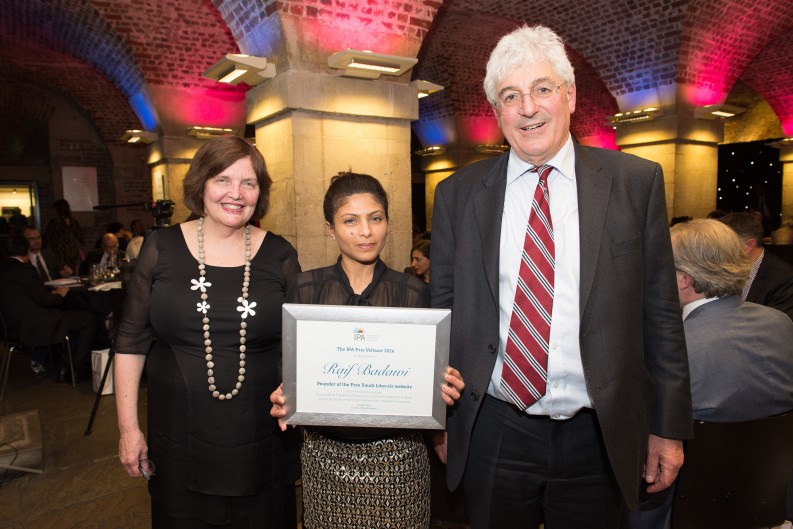 Formerly known as the IPA Freedom to Publish Prize, the award was made Sunday evening in London at a dinner following the IPA’s 31st Congress at Olympia London.

Maureen Freely, president of English PEN, was on-hand to meet Badawi’s wife, Ensaf Haidar Mohammed, who accepted the award on the jailed Badawi’s behalf. Mohammed lives in Canada, which granted the family political asylum in 2013.

Mohammed said, “It’s very touching and encouraging to see Raif’s courage being recognized by the international publishing community. We will use this money to keep fighting for my husband’s release and to highlight the cruel suffering of free speech advocates in Saudi Arabia.” Badawi, who now is 32, was taken into custody in Jeddah in June 2012 and convicted in July of that year for founding Free Saudi Liberals, an online forum, now shuttered.

Accused of “adopting liberal thought” and “insulting Islam,” he was sentenced to seven years and three months in prison and to 600 lashes. The IPA site reports that standing accusations of Badawi also include apostasy, although it’s reported that no court has yet ruled on this. After an appeal in December 2013 from Badawi’s (also imprisoned) attorney, the sentence in May 2014 was expanded to 10 years in prison, 1,000 lashes, a fine of some US$250,000, a 10-year travel ban, and a 10-year ban from participation in media work, including writing, after any release.

Amnesty International has reported on the January 9, 2015, administration of the first 50 lashes of the sentence, in a public flogging in Jeddah. International objection was profound, and the subsequent 950 lashes are not known to have been administered to date. In The Guardian, Jasper Jackson writes that Badawi reportedly began a hunger strike in December.

Fifteen prizes precede the Prix Voltaire for Badawi, including the PEN Pinter Prize (2015) and the European Parliament’s Sakharov Prize (2015).

This year’s shortlist for winners of the Prix Voltaire included the five Hong Kong-based publishers who disappeared late last year and resurfaced in the mainland; Moe Way, the Burmese poet and publisher; Bei Ling, Executive Director of Chinese PEN; and Ahmedur Rashid Chowdhury, the Bangladeshi publisher.

On the announcement of the IPA Prix Voltaire for Badawi, IPA President Bloomsbury’s Richard Charkin said in a prepared statement:

“The worldwide publishing community will continue to highlight the plight of oppressed publishers and writers like Raif. If we don’t, unscrupulous regimes everywhere will only tighten their grip further. Grateful thanks to our generous sponsors, without whom the Prix Voltaire would not be possible.”

“We had many deserving candidates this year, but clearly Raif’s disgraceful ongoing punishment and the extreme risk he ran to express his ideas – and those of other free thinkers – caught the imagination of the IPA’s Freedom to Publish Committee.”

Previously written commentary from Mohammed, Badawi’s wife in Quebec, is available at the Amnesty International site.

In its prepared materials, IPA explains the name change for its award — from the IPA Freedom to Publish Prize, established in 2005, to the IPA Prix Voltaire — as a reference to “the French philosopher and writer François-Marie Arouet (penname Voltaire), who preached a doctrine of tolerance and free expression long before such terms were in general use.

“In addition, from 1755 to 1759 Voltaire lived in Geneva, Switzerland, where the IPA is based, before moving to the nearby French border town of Ferney, which was renamed Ferney-Voltaire in his honor after the French Revolution. ”

Our report on the IPA’s 31st Congress, held on Sunday, is here.