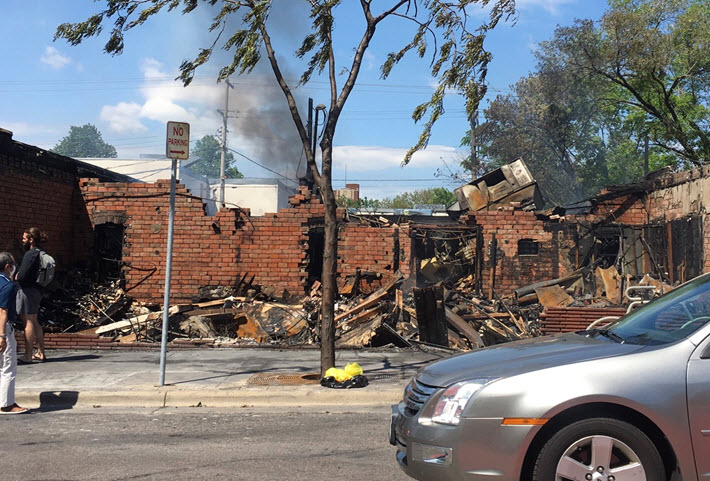 The international bookstore advocacy organization in Belgium states its support for shops burned in Minneapolis, and the International Booker Prize delays its winners’ announcement for more promotion.

Wreckage of the independent science-fiction and mystery independent bookstores Uncle Hugo’s and Uncle Edgar’s in Minneapolis, as posted to the stores’ site. Image: UncleHugo.com

‘The Looting and Intentional Damaging of Bookstores’

Among many businesses torched and otherwise damaged in violence following the police killing in Minnesota of George Floyd, The two bookstores Uncle Hugo’s and Uncle Edgar’s were burned in what Dylan Thomas at the Minneapolis/St. Paul Business Journal reports appears to have been “an intentionally set fire.

“The bookstores,” Thomas writes, “were located on Chicago Avenue just one block north of Lake Street and about nine blocks north of the intersection where Floyd died.”

The destruction occurred reportedly in the early hours of Saturday (May 27).

Today (June 4), the European and International Booksellers Federation (EIBF), based in Brussels, has issued a statement of “deep regret,” saying that the organization “strongly condemns such actions of violence, which resulted in the loss of unique resources and cultural material housed in these independent bookstores.”

Jean-Luc Treutenaere, the federation’s co-president, says, “I was deeply shocked to read that Uncle Hugo’s science fiction and Uncle Edgar’s mystery bookstores have been burned down and destroyed by flames in the ongoing unrest in Minneapolis and many other places across the United States.

“I know that many other bookstores have been impacted by these events and I want to express my concern and support to all booksellers. Bookstores have always been a place for education, culture, and entertainment and booksellers encourage freedom of expression.”

At the bookstores’ site, the dual bookstores’ owner Don Blyly—in business for 46 years—is posting updates as he works through issues of insurance (in this case involving “civil insurrection” clauses) and his son, Sam Blyly-Strauss, is handling a GoFundMe effort for recovery with a US$500,000 goal.

“By ensuring access to literature and wider material to educate readers on these issues, we can build a more inclusive and united culture.”European and International Booksellers Federation

In its messaging today, the EIBF team writes, of course, as the leadership of an international advocacy organization already burdened with the extensive damage to bookstores in so many of the world’s markets by necessary public health shutdowns in the coronavirus COVID-19 pandemic, but the group os also taking the occasion of the violence in Minneapolis to reflect on an element of bookstores’ place in contemporary social issues.

“Many booksellers and bookstores across the United States, but also around the world, have taken a stand against racism, and are showing support for the protests of police violence against black people, members of other minorities, and at-risk groups.

“Booksellers offer a critical contribution and support to local communities,” the statement concludes, “so the looting and intentional damaging of bookstores is even more shocking and striking. It’s important that we stand together against police brutality, and against racism, violence, and hatred. By ensuring access to literature and wider material to educate readers on these issues, we can build a more inclusive and united culture.

“We can only accomplish this by having more, and not less, bookstores in the world.”

Today (June 4), the International Booker Prize has announced that it will start a promotion of its six shortlisted titles for the 2020 prize in the week of June 15 when bookstores in England are expected to begin reopening.

As Publishing Perspectives readers know, the shortlist for this year’s International Booker was announced on April 2.

The announcement of the winner was to have been made on May 19. Of course, because of the timing of the pandemic’s limitations on sales activity, publishers found that it was harder to get shortlisted titles into the hands of consumers, and that’s a valued part of the Booker program’s work.

So that date for the winners’ announcement—this program recognizes both author and translator—has been moved to August 26.

That will give the promotional program time to offer “a series of videos about the shortlisted books, featuring the authors and translators along with readings from actors including Natalie Haynes, Toby Jones, and Elizabeth McGovern.

Ted Hodgkinson, chair of the jurors this year, is quoted, saying, “‘With bookshops up and down the country reopening—a vital part of the UK’s cultural bounce-back—what better moment to celebrate our wonderful shortlist afresh?

“These are books deserving of an extended time in the spotlight, books that reveal greater depths with each rereading. As my fellow judges and I return to them ahead of our final meeting in August, now is the perfect moment to read along with us, and place an order with your local bookshop.”

More from Publishing Perspectives on the Booker Prize programs is here. More from us on international publishing and book awards programs in general is here. More on bookstores and bookselling is here, more of our Industry Notes series is here, and more from us on the coronavirus COVID-19 pandemic and its impact on international book publishing is here and at the CORONAVIRUS tab at the top of each page of our site.