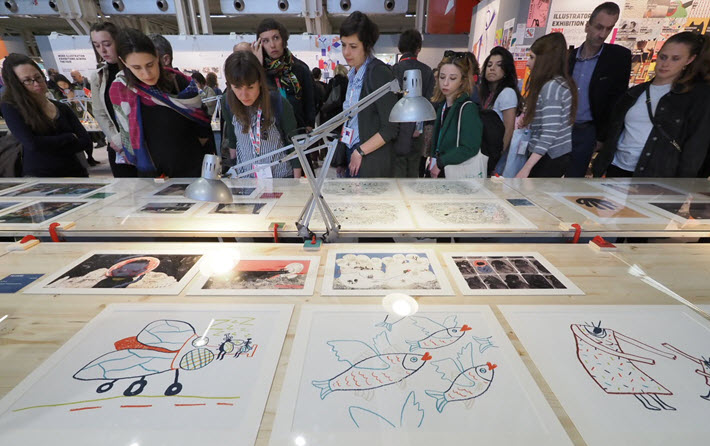 Bologna’s influential Best Children’s Publishers of the Year program has its deadline for submissions this year at the end of the month, as comics get a new showcase at the Italian fair. 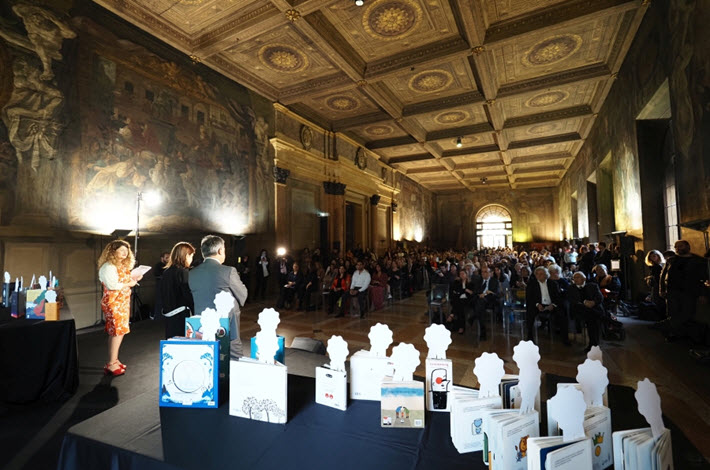 At the 2019 awards ceremony for the Bologna Children’s Book Fair’s Best Children’s Publishers of the Year program at the Palazzo d’Accursio. Image: BCBF

Italy’s Bologna Children’s Book Fair (March 30 to April 2) will have its 57th iteration this year, but the Bologna Prize for Best Children’s Publishers of the Year is young by comparison, this year in its eighth annual cycle.

This is the prize program that divides its prizes into six geographical areas: Europe, Asia, Africa, North america, Central and South America, and Oceania.

And in an era in which rights sales are rapidly gaining in revenue importance alongside standard book sales, the prize, organizers say, “is designed to foster a mutual exchange of knowledge and ideas among different countries, areas and cultural identities across the world.”

Winners in this competition are chosen by exhibitors at the book fair, which this year features the United Arab Emirates’ Sharjah as guest of honor during its ongoing UNESCO World Book Capital year.

Once nominations are in at the end of the month, representatives of Bologna, IPA and AIE will winnow them down to five shortlisted works per region. Timing:

Winners in past years’ competitions are not eligible for the 2020 cycle. Members of IPA, cultural institutions devoted to book and reading promotion worldwide, and the publishing houses exhibiting at the 2020 Bologna Children’s Book Fair are invited to nominate a maximum of 17 publishing houses, of which up to five can be from their own geographical area (not necessarily their own country) and up to two nominations from each of the other geographical areas. Publishers cannot nominate themselves.

More details of process and procedure is here.

Entries closed Wednesday (January 15) in Bologna’s Illustration Exhibition 2020, and organizers report that thousands of works created by 2,574 artists from 66 markets have been reviewed by a panel of jurors comprising Valérie Cussaguet, Enrico Fornaroli, Lorenzo Mattotti, Cathy Olmedillas and Machiko Wakatsuki.

This year, the fair also features a new Comics Corner, in keeping with the rising interest in comics and other graphical storytelling formats in many parts of the world industry.

The special exhibition area is to concentrate exhibitors of graphical work for children in international markets.

Of potential special interest is a debate on translations of these works and the particular components involved in interpreting graphics-based literature across languages.

If you’re interested in exhibiting in the Comics Corner program, there’s an application form (PDF) here.

More coverage from Publishing Perspectives related to Bologna Children’s Book Fair is here, and more from us on awards in books and publishing is here.