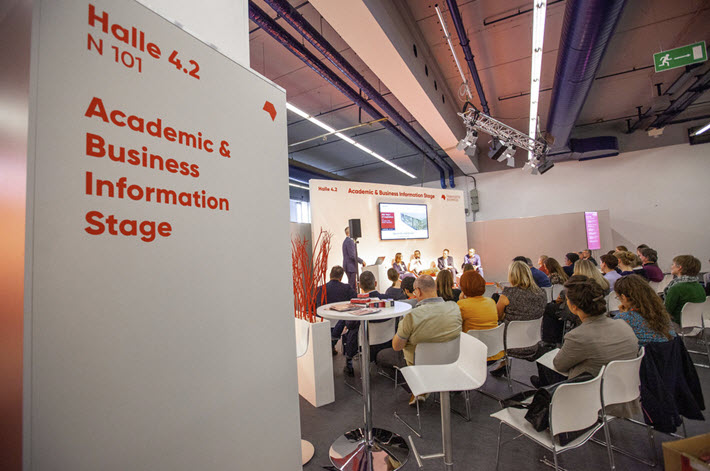 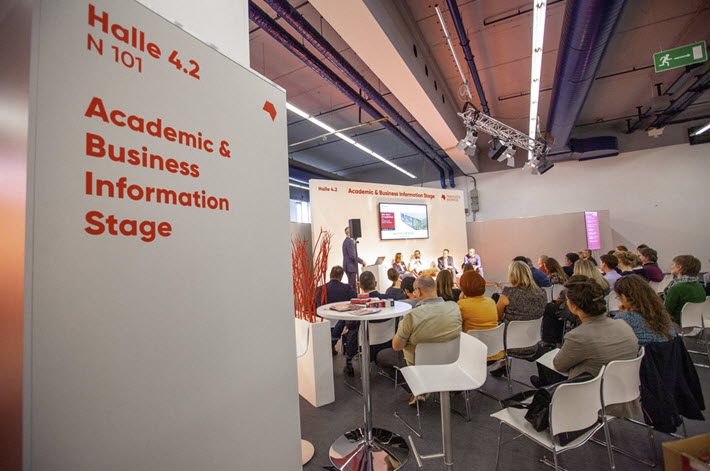 Once more a Premium Partner of Frankfurter Buchmesse (October 16 to 20)—and a longtime sponsor of the fair’s place and purpose in the international industry of book publishing—the US-based Copyright Clearance Center (CCC) has announced an ambitious series of events for this year’s trade show, with its dates going into executives’ diaries for the trip now.

And Michael Healy, CCC’s executive director for international relations—just seen this week on the stage of the International Publishers Association’s (IPA) first Middle East seminar—tells Publishing Perspectives that Frankfurt in 2019 “seems to be faithfully reflecting a sense of possibility” with less need this year to focus on challenges and difficulties for the far-flung markets of the world trade book publishing industry.

The sequence of events the company has rolled out reflects this. We’ll list them here and then hear more from Healy. Note that most of these events are thoughtfully arranged for 30 minutes’ duration, making it possible for busy publishing professionals to get what they need from an event and still work an appointment into a given hour.

And remember that Copyright Clearance Center can be found at Frankfurter Buchmesse this year in Hall 4.2, stand E22.

In March, the European Parliament approved the Directive on Copyright in the Digital Single Market with the stated intention of promoting “a well-functioning marketplace for the exploitation of works.” As EU member-states begin to support the directive through passage of national legislation—a two-year process—Copyright Clearance Center’s panel of specialists in law and publishing will offer views on the opportunities, challenges, and unintended consequences that the copyright directive presents.

The following is a two-part session on transformative agreements

In January, John Wiley & Sons announced a three-year partnership with Projekt DEAL, a representative of nearly 700 academic institutions in Germany. The “transformative agreement” provides Projekt DEAL institutions with access to read Wiley’s academic journals back to the year 1997, as well as for their researchers to publish articles open access in Wiley’s journals, all for a single annual fee. Two key participants in the negotiations—Wiley’s Deirdre Silver and Max Planck’s Ralf Schimmer—join CCC’s Roy Kaufman to explore how the program will operate and how it may serve as a model for “advancing open science, driving discovery, and developing and disseminating knowledge.”

Judging by their growing number, “transformative agreements” will play a prominent role in the open access dimension of scholarly publishing in years ahead. Many types of transformative agreements exist, although all move journals from subscription-based to contractually-based business models. Such a change raises important questions for all stakeholders involved. How can systems and tools support the needs of researchers, institutions and funders? What data is needed to track the efficacy of transformative agreements? In the absence of tools and frameworks, how can publishers guide the institutional sales team to negotiate the right deal? A panel of licensing, publishing and technology experts will offer their insights.

Your gut has met its match. Data-driven solutions for publishing can lead to improvement in many areas, from manuscript workflow to peer review, audience development to market reach. Yet publishing has a data problem—a deficit of accurate, relevant data necessary to manage in a world of change. Data is no guarantee for success, but as several use cases demonstrate, better data leads to better publishing (and possibly, better science, too).

“Innovation in the Executive Suite” — CCC president and CEO Tracey Armstrong joins an executive panel to focus on the issues, challenges and opportunities that executive suites manage on a day-to-day basis and how they consider which bets to make, as well as how they support their own new initiatives.

The Frankfurt Rights Meeting has been a meeting place for decision-makers in the field of rights and licenses for more than 30 years.

CCC president and CEO Tracey Armstrong joins a women’s leadership panel to discuss the status of women in publishing and key challenges. The pathway to leadership for female executives is far from clear in international book publishing—success stories still seem more anecdotal than systemic. You’ll find more on this year’s series of Publishing Perspectives Talks here.

Michael Healy on Issues Ahead 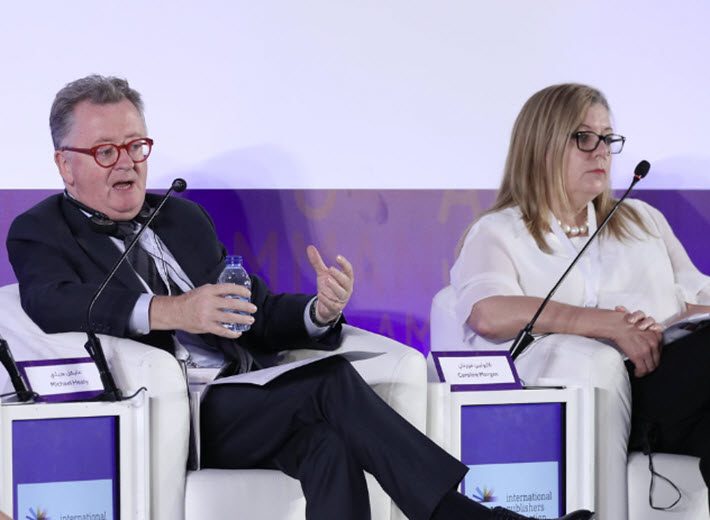 Looking first at Frankfurt Wednesday’s late morning (11:30 a.m.) CCC focus on “The EU Digital Single Market Copyright Directive: Licensing in the Digital Age,” Healy tells Publishing Perspectives that because much of the attention has gone to the directive’s attempt to curb what major media platforms do with copyrighted material—especially in the news realm—other issues “have been somewhat obscured.

“So I think what we hope to do in this very brief 30-minute event with Carlo and Mark and Roy and Elizabeth is to tease out some of the key findings and key implications of the DSM’s copyright directive, and to open up a conversation about the possibilities that derive from the directive.

“I think these minutes” at Frankfurt “are an opportunity for explanation but also for raising awareness, building consensus around the sense of opportunity for licensing. This is what has to be enshrined in national law in each of the member states. What we’d like to do with publishers attending this session is excite them about that sense of opportunity to put in new, voluntary, and collective licenses.”

“We all know the central position that open access has had in seminars and discussions for years, a dominant theme, often with different expressions and issues to highlight every year. But it does look like in 2019, at Frankfurt, a lot of people will be thinking about transformative agreements, will be asking how effective they’re likely to be, and—just as important—how you measure their effectiveness.

“What data can be applied to judge the effectiveness of a transformative agreement?

“I’d expect the topic most central to open-access this year will be the transformative agreement because in the run-up to the fair we’ve had so many inquiries about it, and to have both the funding agency and the publisher together in this” to talk about the Wiley transformative agreement “is going to be really interesting. They’re talking about what it means not only for the two partners but also for the wider industry.”

The same will be true of the second session with its emphasis, as we’ve reported, on the new Projekt Deal development with that’s expected to publish more than 13,000 articles by German scholars and scientists i open access annually, making them freely available to everyone and raising the visibility of German research published by Springer Nature.

And lastly, the “Better Data is Better Publishing (and Better Science, Too)” session on Frankfurt Thursday, October 17, will respond to the fact, Healy says, that “big data” has become “one of those handy labels, shortcuts,” as a matter of speech, and yet, he says, “A lot of publishers are just beginning to grapple with what it means.

“And particularly,” he says, “it’s the question of what that data can be and how it can be used to improve publishers’ businesses. Whether you’re looking at almost any part of the value chain, all of those pieces could be very much improved if they’re informed by better data. That’s what Chuck Hemenway will be demonstrating is how better data simply leads to better publishing.”

More from Publishing Perspectives on Frankfurter Buchmesse is here, and more from us on Copyright Clearance Center is here.