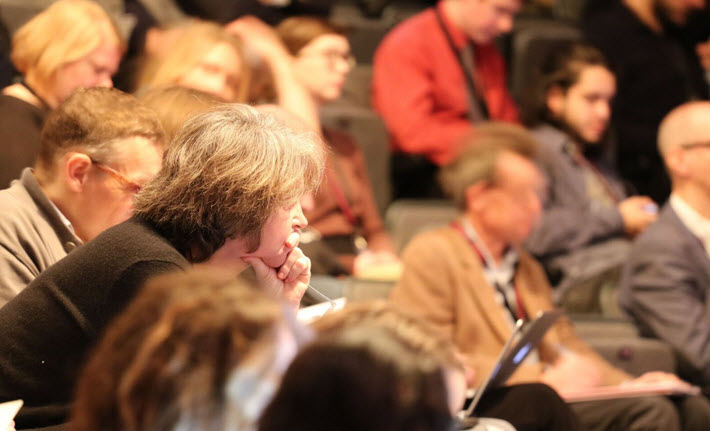 This year, FutureBook Live in London will try to move attendees ‘out of their comfort zone’ amid the uncertainties of the UK market’s post-Brexit future. 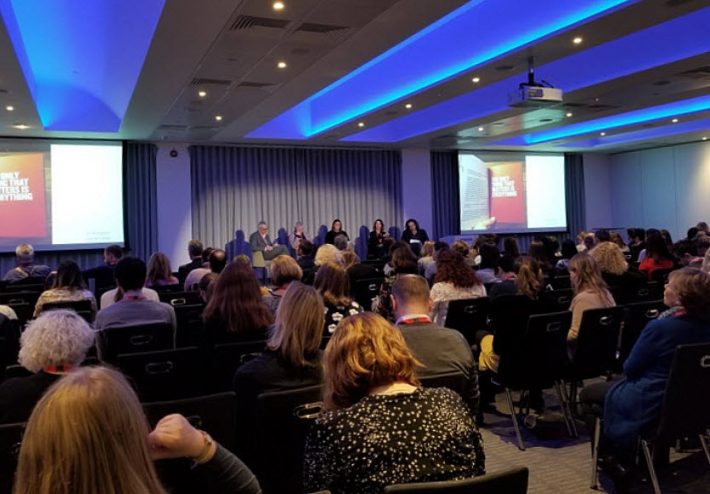 Last year’s FutureBook conference in London from The Bookseller was, in part, a jam session for the viewpoints of publishing contrarians. As it would turn out, it became at least one swan song, as well.

Richard Johnson, who strutted his bad-boy CEO stuff on the FutureBook stage as the primary keynote last December would find himself ejected from Bonnier Publishing by February. Johnson has gone on to self-publish his memoir of his near-decade with Bonnier, Show Me Your Medals. And, as Bookseller editor Philip Jones has written, the book is “an uncomfortable tale of how one man took on the publishing establishment—and didn’t win.”

Is it maybe no coincidence that Jones has titled his latest opening column in the printed edition of The Bookseller “Unpredictable Friday”? (And Johnson, as we’ve reported, already has opened a new venture of his own, with Derek Freeman and John Blake.)

This year’s program tomorrow (November 30) promises “to put a sparkling rocket of creativity and courage up the book trade.” And, perhaps as an exclamation point to that intent, the organizers have added live to the title. It’s now FutureBook Live, and arrives, once more, as the final act in the publishing industry’s year of confabs, the largest publishing innovation conference in Europe. 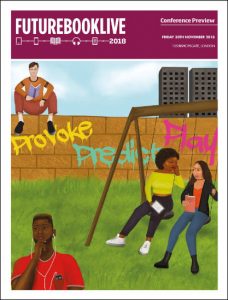 The cover of this year’s FutureBook Live preview. You can read it here

Few will have forgotten that this is expected to be the last FutureBook in a European UK. Government warnings Wednesday (November 28) say that the British economy will suffer from Brexit “no matter what,” shrinking the financial prospects of the nation by somewhere between 3.9 and 9.3 percent. (Here’s Jen Kirby’s write-up at Vox.)

All of this can be expected to have the trade rightly looking quite closely at its numbers. As Jones paints the picture, there’s good news in UK book sales, not least thanks to the memoir of an American first lady whose time in the White House now takes on the aura of Camelot.

Robust action into the holidays, however, Jones points out, can’t hide “the unpalatable truth that the era of big discounting is not behind us [and] … It is also true that we are never far away from an algorithmically driven price war.” And the High Street bookshop is, we’re reminded, what suffers, “not because the deals are different to what they once were,” writes Jones, “but because the Web makes them visible.”

The answer from this year’s FutureBook team, then, has to do not with the contrarianism of last year but with the hope of some rocketing creativity that might be sparked in the sessions of three main strands of programming with three sets of keynotes. 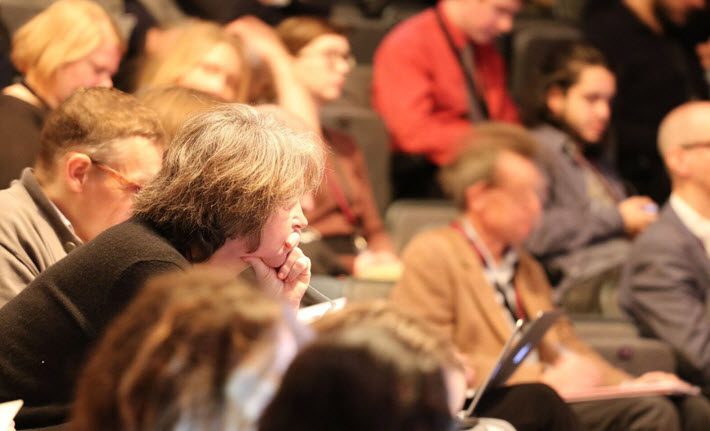 Back this year are both audio and edtech programming streams, too.

On the audio track, attendees will hear from Enders analyst Joseph Evans, from WF Howes’ Miles Stevens Hoare, and from “radio futurologist” (did you miss your calling?) James Cridland.

On the edtech track, participants will have keynote comments from UCL Knowledge Lab’s Rose Luckin, the University of Buckingham’s vice-chancellor Sir Anthony Seldon, and from the Department of Education’s digital skills unit deputy director Kiera Newmark.

One of the most outspoken players in the UK industry in terms of diversity issues, Dialogue Books publisher Sharmaine Lovegrove, speaks late in the day as the conference’s Person of the Year. 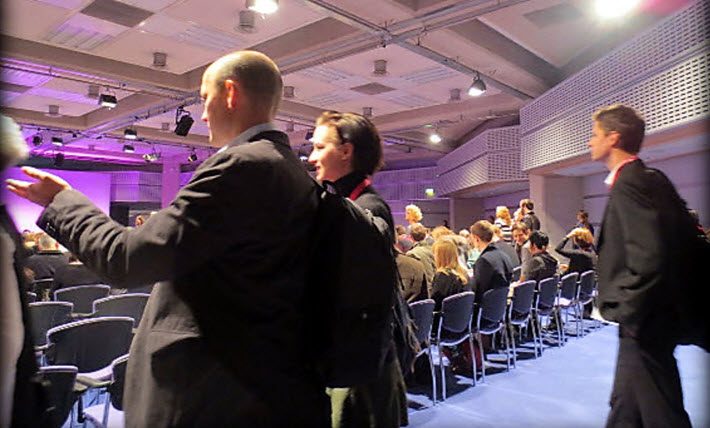 At the 2013 FutureBook conference in London. Image: Porter Anderson

Between the day-opening and day-closing comments, the three strands’ topics will divide and converge at times, with session carrying titles including “Future Learning: The Big Ideas,” “How To Market in a Post-GDPR, Post-Influencer Age,” and “Trends in Audio Content for Voice Assistant Technology.”

“Audience Matters: What Readers Really Want” would, a couple of FutureBooks ago, probably have seemed the most core-sturdy session title of all. But, of course, publishing is learning that all its customers are no longer readers. Some are listeners. Some are watching 3D illustrations stand up from books’ pages in augmented reality. Some are being educated to become readers—or other format fans—through entirely digital coursework that arrives on their smartphones, not a textbook in sight.

So for a third year, the FutureBook (now Live) conference is a thing that looks and runs through the day differently, according to which audience you ask. Some will see it as a mostly audiobook show. Others as mostly edtech. Others as a hunker-down on industry challenges.

Then there are the blended options. This year, the tickets are “all access,” meaning that the cleverest attendees may be spotted in the audiences of all three strands, moving between the streams, innovation nomads among the sessions.

An “Unpredictable Friday” for the UK book business and its main conference of the year, indeed. It will be interesting, as always, to see what Jones and his associates make of it.

FutureBook Live 2018, 9:30 a.m. to 5:30 p.m. on Friday November 30 is at the 155 Bishopsgate complex in London’s Liverpool Street, with ticket prices of £430 for The Bookseller subscribers and £460 for non-subscribers. We recommend asking whether any seats might be available at the last minute rather than walking up. If you’d like to inquire check with briony.morgan@thebookseller.com