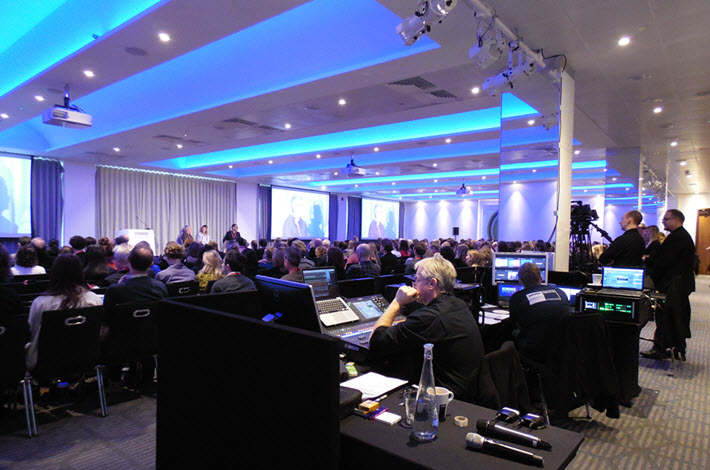 Some of the FutureBook conference’s most memorable moments came from speakers who addressed challenging issues and lobbied for awareness to drive the industry forward. 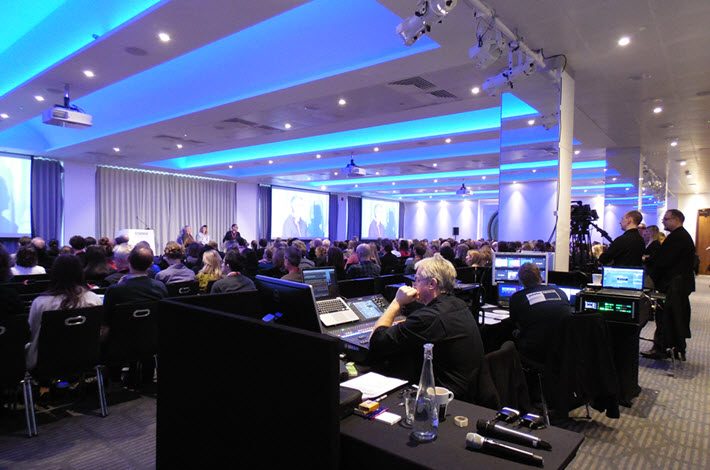 At FutureBook 2017 at 155 Bishopsgate in London: blue lighting replaces the traditional pink in this year’s conference. Image: Porter Anderson

‘We Are in the Entertainment Business’

As The Bookseller’s annual The FutureBook conference has evolved, its position as the largest of European publishing conferences has been enhanced by the organizers’ close relationship to the UK industry. The Bookseller team, led by Nigel Roby and Emma Lowe on the business side and by Philip Jones and Molly Flatt in editorial, tracks the ins and outs faced by a national publishing industry as its undisputed news medium of record. 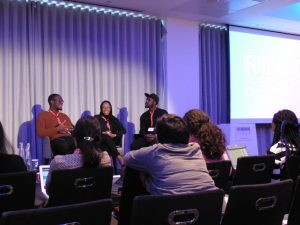 A reported 600 publishing professionals gathered at the FutureBook conference on December 1. For a second year, audiobooks and edtech were given their own series of sessions (we have some coverage of those here). The program’s annual awards, which recognize many sectors of publishing, were announced at the end of the day.

During the conference, the collegial and congratulatory aspects of the program were occasionally punctuated by contrarian events, comments, personalities presenting healthily challenging viewpoints to an industry that might prefer an unrelieved reflection of itself as stable and successful.

The UK’s industry is hardly alone in enjoying flattering selfies. But the intimacy of The Bookseller with its coverage community makes it especially admirable when the programming questions the comfortable norms. And thus the standout moments at FutureBook 2017 arrived when something cheeky, or reachy, or novel happened. Such moments generated a pause, a bump in thinking, a “wait a minute” chance to hear something not normally spoken in hallways and lobbies and sales meetings back at the office.

Here are a few such moments from December 1. 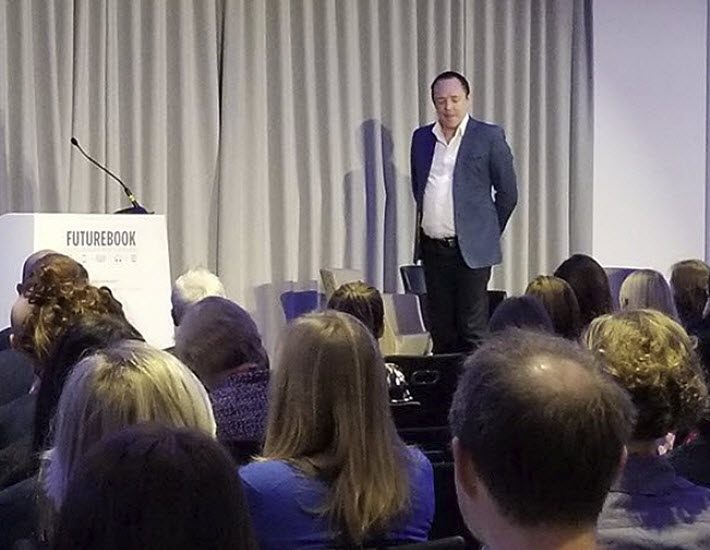 Richard Johnson: ‘The Industry Is Too Snobbish’

At Bonnier Publishing, “We decided we were going to stand for something. (1) We publish for everyone. (2) We recruit for everyone.”Richard Johnson

That woke everyone right up. Richard Johnson, the CEO of Bonnier Publishing, gave an opening keynote titled “How Bonnier Publishing Became a Major Force in UK Publishing.” No nation’s industry necessarily runs to meet another country’s newcomer at the docks, and the UK’s publishing community is tight-knit, even while it competes internally. The success of Sweden’s Bonnier, Johnson had arrived to tell everyone, is because it’s not as snobbish—his word—as the overall industry in place.

“Books have the power to enrich everyone’s lives,” Johnson said, “particularly the youngsters that we sell to, the ones who need education and have got no money. We should be selling to those people. And we do, but the industry should as well. The industry is too snobbish still.”

He’s not wrong that his company’s focus on inclusivity has been on display to all. The fun caricatures of its staffers in all their diversity have been on the site for years, and some of us have written about this. As it turns out, these are the faces with which Johnson feels he was able to get ahead of the current acute need for egalitarianism in publishing, and he sees this as having set him and his company way ahead. He may not be wrong.

He took it farther, too, urging the business to think of itself as “an entertainment business, not the literary business. Sometimes we create literary masterpieces which is fantastic,” he said, “but we have to entertain people to attract people.

For years, Bonnier Publishing has pictured its multicultural staffers in fun caricatures

“And let’s not be afraid to say that: We are in the entertainment business.”

This goes, of course, to the imperative of the digital reality now gripping an industry that in many ways has responded well and profitably to the potential but still can be myopic when it comes to recognizing just how much of the wider world of culture—Johnson wants you to say “entertainment”—is now publishing’s competition.

Johnson’s commentary was particularly good when he talked of arriving at Bonnier to find the Swedish family-owned business culture in place to be built around silos “and old ways of thinking.” He asserted that in 2012, he guided the company to define the change it would generate in itself: “We decided we were going to stand for something. (1) We publish for everyone. (2) We recruit for everyone.”

And while he defined publishing as “an industry like no other,” Johnson had come to warn his colleagues that all other industries, in the media world, at least, are prepared to eat the book world’s collective lunch unless the kind of recognition of a multicultural reality he enabled isn’t taken up.

Having delivered himself of a decidedly boastful presentation, Johnson followed up with a funny video in which he was the butt of many jokes, apparent Bonnier staffers shrugging as if they’d never heard of him, and one viewer on screen asking, “Do you think he knows he’s an ass?” The fact that the reception among FutureBook conferees was rather muted indicated that, for all his swagger, Richard Johnson had hit the nerve he’d intended. 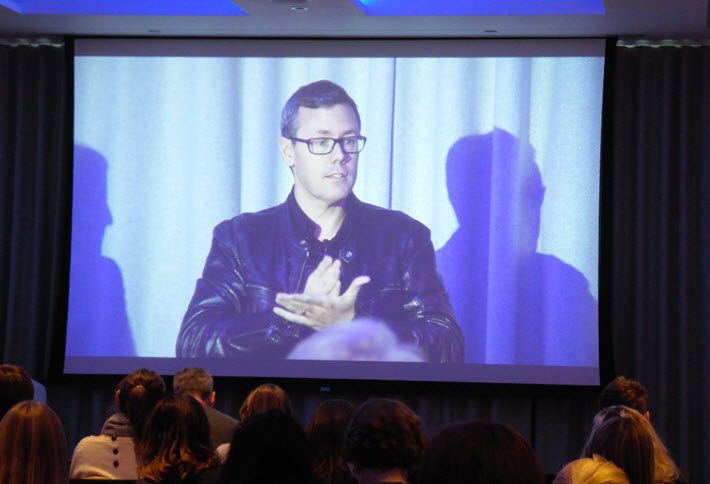 In a resonant moment of the conference,  Jeff Norton, the author and television producer (Awesome Media Entertainment) recalled a 2013 moment in the FutureBook conference’s “Big Ideas” session–missed this year–when Canongate’s Jamie Byng (who was on another panel this year) announced that he would publish only as many books in a year as he had staffers. Publishers, Byng asserted, simply were publishing too many books.

Today, more publishers are aware of this. Simon & Schuster UK’s Ian Chapman told Publishing Perspectives at Frankfurt that his company will produce 100 fewer titles this year and focus more on strong marketing. And for his part, Norton said that imprints should cap their output at 14 titles per year. That arbitrary figure was a joke, but the concept was not: Norton knows that the problem of over-production in many of today’s publishing markets is a real one.

And in case anyone needed to hear more on Richard Johnson’s message about publishing being “in the entertainment business,” the conference obliged during the afternoon session on video-on-demand when Norton spoke about how pervasive the rise of excellent television has become.

“TV is now the dominant medium of culture,” he told the audience.

“Film is dying a slow, painful death. Books are at risk of becoming ‘niche products’ or simply intellectual property source material” for the burgeoning television production industry that has recaptured its audience with superb storytelling, production values, and streaming delivery onto every device in the digital arsenal.

“Netflix knows me,” Norton said. “Amazon knows me.” And yet, he said, he’s been trying for five years without success to get Hachette, his publisher, to correct the reader age-range on his Metawars books’ online listings.

“TV dominates the cultural conversation,” he said, through subscription formats like that of Netflix, Prime membership’s offers to Amazon consumers, the major cable studios’ roll-outs of direct-to-consumer distribution. And co-ventures, he said, hold the key to sustainable rights arrangements. 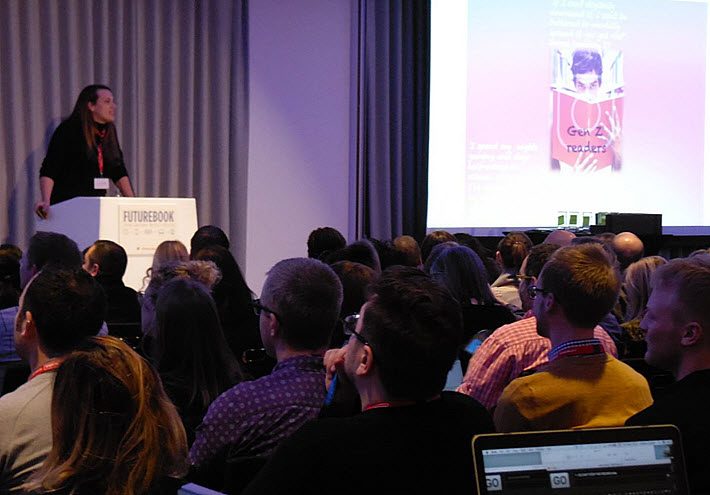 “The novelty” of books for Generation Z is that books “get them off the screens,” into a less noisy, safer context for reading. But publishing must make “a more invigorating,” inviting space, in order to bring these readers into the community of books.Eliza Filby

While the energy of that “Big Ideas” session was lacking at the end of the day, historian and “millennials expert” Eliza Filby’s closing keynote tied well into the day’s initial call from Richard Johnson for audience awareness, understanding of the entertainment dynamic’s importance in publishing.

Filby’s task was to describe “Generation Z,” represented by her in some instances as a 16-year-old today named Zoe: publishing’s next incoming young adults, in other words.

A litany of contrasts and comparisons washed over the audience as Filby called out one characterization after another. Generation Z, for example, she said:

“The novelty” of books for Generation Z, Filby said, is that books get them off those screens into a less noisy, safer context for reading.

But publishing, she warned, in what would be the last contrarian, cautionary comment of the day, is going to have to make the reading space “more invigorating” in order to capture Generation Z as readers. Why? Because, Eliza Filby said, millennials have 12-second attention spans while Generation Z has “an attention span of eight seconds.”