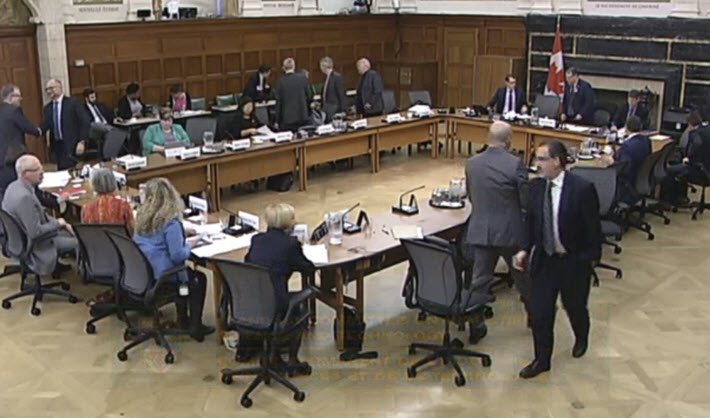 ‘My colleagues and I are suffering real-time damage triggered by this act,’ said Glenn Rollans, president of the Association of Canadian Publishers, during a hearing on Canada’s Copyright Modernization Act. 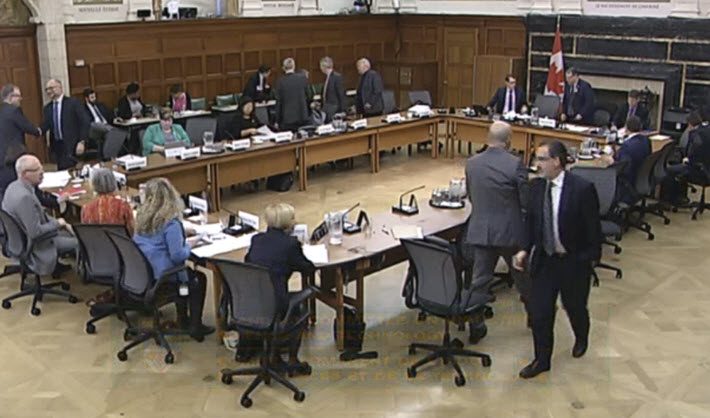 A view of Meeting No. 103 of the Canadian Parliament’s Standing Committee on Industry, Science, and Technology in which testimony was heard, April 26, on the 2012 Copyright Modernization Act. Image: ParlVu Canadian Parliament video

‘You Need To Take a Leadership Role’

In our earlier piece on Canada’s Standing Committee on Industry, Science, and Technology hearings about the country’s 2012 Copyright Modernization Act, we looked at the comments of Hugo Setzer of the International Publishers Association (IPA).

The hearing was one of a series of such events held by that parliamentary committee as part of a five-year review of the act.

Today we bring you excerpts from several comments made by Canadian publishing experts called by the hearings to offer testimony.

To recap this long-running hot spot in world copyright issues, the problems with the Copyright Modernization Act—as examined in a Toronto conference in November—have to do with the scope of a “fair dealing” exception (also called “fair use”) in education settings.

Canadian universities have worked along the lines of a “10 percent” approach, which other educational institutions, including K-12 schools, have then adopted. In some settings, instructors have allowed themselves to copy and distribute to students up to 10 percent of a book without a publisher’s permission and without paying a licensing fee, sometimes called a tariff.

Canadian publishers estimate that they’re losing more than $50 million annually in copyright revenue as a result of this “fair dealing” situation. The crisis has set the publishing and educational communities at odds with each other in a series of increasingly acrimonious debates and court actions around Access Copyright, the federally mandated collection agency for copyright revenue. 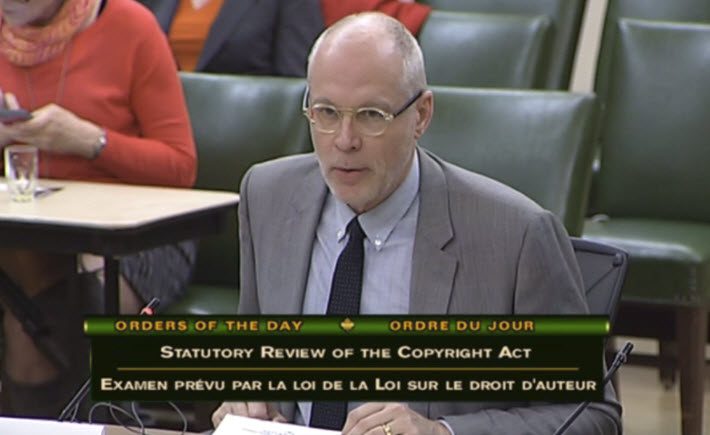 Testimony from the Association of Canadian Publishers

We look first at the statement made to the hearings by Kate Edwards and Glenn Rollans, respectively the executive director and president of the Association of Canadian Publishers (ACP).

“The rights you protect for me and my colleagues are not taken away from anyone. They are protected for everyone. We want readers, and readers want the works we create and publish.”Glenn Rollans

Rollans, speaking for the association, told the committee that the organization has nearly 120 Canadian-owned English-language book publishers in its nationwide membership that produce 80 percent of the new books published by Canadian authors annually. “We are risk investors and creative partners in books. We fill the role in the book world that film producers fill in the film world.”

“We’ve been damaged by the Copyright Modernization Act,” Rollans told the hearing. “We’re not asking you to turn back the clock. We’re asking you now to unleash the unique contributions to Canada that come from our sector. It won’t happen if you don’t fix our marketplace.

Rollans stressed that the animosity that has arisen from the crisis doesn’t represent a true head-to-head dilemma: “This is not a zero-sum contest between copyright creators and copyright users. The rights you protect for me and my colleagues are not taken away from anyone. They are protected for everyone. We want readers, and readers want the works we create and publish. Real balance is when both sides win.”

He also referred to the resounding court decision of last summer in favor of Access Copyright and the publishing community in the case called Access Copyright v. York University—and covered by Publishing Perspectives here—telling the hearing, “The evidence of whether Canadian publishers are damaged by unfair copying has been tested in Federal Court, and the decision is that we have been damaged. Those facts will not change on appeal.”

And then moving to the heart of the dilemma, Rollans pointed to the fact that the business of publishing and its copyright protections depend on the intelligent support of governmental regulators. Rollans stressed to the committee that the damage to publishers and their authors is going on now. Help is long overdue and needed quickly.

“My colleagues and I are suffering real-time damage triggered by this act. Graduates of Canadian colleges and universities are losing opportunities to make a living in creative professions.”Glenn Rollans

“I need to say as clearly and as bluntly as I can,” Rollans told them, “that if you don’t intend for there to be damage, you need to take a leadership role in stopping it and reversing it.

“My colleagues and I are suffering real-time damage triggered by this act. Graduates of Canadian colleges and universities are losing opportunities to make a living in creative professions.

“The necessary changes are completely in your power. Much good and no harm will come from them. Fair payment for valuable contributions to their education does not harm Canadian students. It helps secure their future success.

“Published resources are not driving the high cost of education. Collective licensing, in particular, is probably the biggest bargain in education. It offers the whole world of copyright-protected works for a few dollars a year, avoiding all kinds of other costs.” 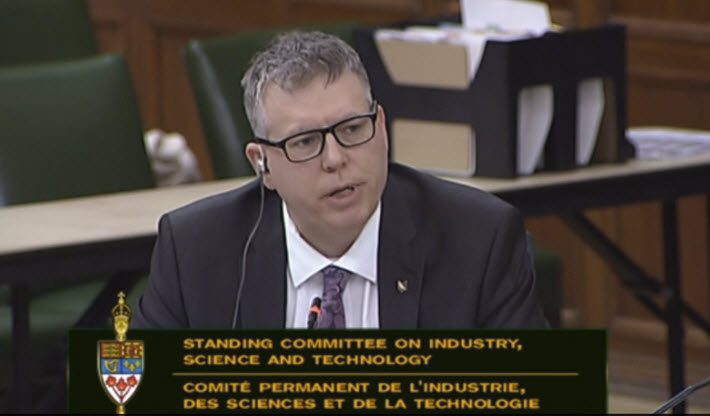 Testimony from the Writers’ Union of Canada

John Degen, executive director of the Writers’ Union, explained to the hearing that he spoke as the representative of 2,100 members of the union and for the International Authors Forum in the UK, which he said represents some 700,000 writers and visual artists in many parts of the world. Like other members of the international publishing industry, he said, “The world’s authors are also watching this process with great interest and considerable anxiety.”

“Each year in Canada more than 600 million pages of published work are copied for use in educational course packs … and the education sector is essentially claiming all of that work for free.”John Degen

A part of Degen’s mission was to bring the ground-level reality to the hearing: “Authors are regular guests in classrooms across the country,” he said, “and many have personally witnessed beleaguered teachers photocopying an improvised, free ‘class set’ of materials, sometimes entire books. This is happening.”

Indeed, in compensation terms, “Fully 80 percent of our licensing income has simply disappeared because schools now copy for free what they used to pay for” since the implementation of the Copyright Modernization Act. “These are facts that may be ignored by some, but they’re indisputable.”

Degen told the hearing, “Each year in Canada more than 600 million pages of published work are copied for use in educational course packs, both print and digital, and the education sector is essentially claiming all of that work for free. That is the real world result of education’s copying policies.”

He also countered assertions by the educational community that it does cover copyrighted content costs.

“Many Canadian authors have simply called it a day and stopped creating works. I ask you: Are these the outcomes Parliament desired in 2012?”John Degen

“You’ve recently heard from educational representatives that they continue to pay copyright licenses. To be clear, they continue to pay some licenses, mostly for expensive foreign journal content, but they are not paying the reasonable and affordable collective licenses of Canada’s commercial authors and publishers. … Those same policies have been thoroughly discredited by York University’s copyright infringement loss in Federal Court, yet are still widely in use by school boards and post-secondary institutions across the country.

“Canadian schools and education ministries are now actually suing Canadian authors through our collective in a desperate attempt to re-establish the ground they lost in the York case,” he said, something you can read more about in Publishing Perspectives’ coverage here.

“As a result of all of this,” Degen said, “many Canadian authors have simply called it a day and stopped creating works. I ask you: Are these the outcomes Parliament desired in 2012? … The solution is simple, and it’s truly fair. Remove education as a category of fair dealing and require collective licensing for educational copying.” 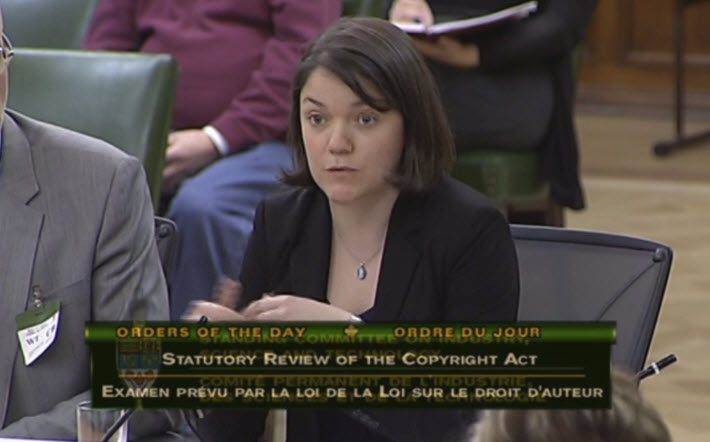