‘Canadian content? There won’t be any,’ warned Kate Taylor of the Globe and Mail, as she moderated a panel on Canada’s Copyright Modernization Act of 2012.

Rights holders remain frustrated by the Canadian Copyright Modernization Act’s exceptions, now due for a five-year review. In this conference on the subject last week in Toronto, attendees were told, ‘The world is watching.’ —Porter Anderson

In Danger of a ‘Bestseller Economy’

At the Toronto conference “In the Balance: Looking Forward Five Years After the Copyright Modernization Act,” speakers and panelists provided context for the original language of Canada’s copyright act. They also discussed the current status of the legislation, how individual creators have fared since 2012, and what might be the way forward.

Canada’s Copyright Modernization Act (CMA) of 2012 is one of the most controversial adjustments to copyright protection in several parts of the world.

The program was presented last week by the Canadian Copyright Institute and sponsored by the law firm McCarthy Tetrault.

Canada’s act was introduced with a stated intention of bringing copyright law into the digital age, and it promised to balance the needs of creators and users. Now, five years on, the act and its many “user-friendly” exceptions have become the focus of international attention for perceived damage, as evidenced by declining royalties for creators and the closing of educational publishing houses.

A particularly troublesome aspect of the CMA is its expansion of the scope of “fair dealing”—called “fair use” in some cultures—to include education. Vague and imprecise language in the act has resulted in universities setting their own fair-dealing guidelines, eventually creating a “10 percent” rule, which other educational institutions, including K–12 schools, have then adopted. In short, they wrote their own rule enabling them to copy up to 10 percent of a book, or a full chapter, and distribute this copied material to students without the publisher’s permission and without paying a licensing fee or tariff.

As we reported in August, a federal judge ruled in favor of Access Copyright in its action against York University, stating that the university’s policy of copying without permission or payment is not fair or reasonable.

And that’s the backdrop for last week’s conference. The Copyright Modernization Act is due to be reviewed in 2017. It’s referenced in the Creative Canada Policy Framework (section 1.5), but as yet the review has not been launched, nor has Canadian Heritage, the country’s cultural ministry, indicated when that review will happen.

The half-day event in Toronto included an interview conducted by McCarthy Tetrault’s Barry Sookman with former Justice of the Supreme Court of Canada Marshall Rothstein, CC, QC. The program also featured a summary of the future of Canadian copyright by Lui Simpson, executive director of the International Enforcement and Trade Policy Association of American Publishers; and a panel discussion led by the Globe and Mail’s film critic and arts columnist, Kate Taylor, featuring novelist and journalist Christine Fisher Guy, singer/songwriter Damhnait Doyle, and playwright-composer Scott White.

‘The Importance of Balance and Technological Neutrality’

“We create opportunities via copyright and patent. Creative areas are affected by new technologies never thought of. …These are big, important societal issues, technology and copyright.”Marshall Rothstein

During the interview with Sookman, Rothstein emphasized more than once the importance of giving people an incentive to spend their time creating and inventing. “Protections of copyright and patents provide, or help to provide, that incentive,” he said.

Their discussion ranged widely, but essentially focused on the thinking behind the justices’ decision to grant the education exemption in the Copyright Modernization Act and how these decisions are reached. Here are some highlights, with all comments paraphrased.

Barry Sookman: There are so many cases where the court is split. Why is copyright so controversial?

Marshall Rothstein: Patent is controversial, too. We create opportunities via copyright and patent. Creative areas are affected by new technologies never thought of. Technology comes along and changes everything. Old statutes without knowledge [of tech] need to be adapted. These are big, important societal issues, technology and copyright.

BS: Is there anti-intellectual-property sentiment among the justices? For example, by including “education” as an exemption, is there hostility toward IP? Hostility to creative rights?

“In copyright law there’s an ebbing and flowing–at some points in time, user rights are more predominant, and at others, it’s creators’ rights.”Marshall Rothstein

MR: Eighty to 90 percent of law is statutory today, and so the judges’ job is to interpret statute…to acknowledge that laws should be created by parliament, not by the nine judges of the supreme court…Judges must deal with the act as it’s written and adhere to the agenda of interpreting the text. Concepts like “incidental exceptions” are not justified and not a part of the copyright act.

BS: And what about the concept of user rights?

BS: How do clients and lawyers approach the concept of balance and technological neutrality? Where does “balance” fit?

MR: Start with the text. Look at the context and purpose, all with the objective of determining parliament’s intention. Balance and neutrality are considerations, not statutory provisions. Balance and technological neutrality don’t trump text and context.

A 91-Percent Reduction in Licensing Revenues 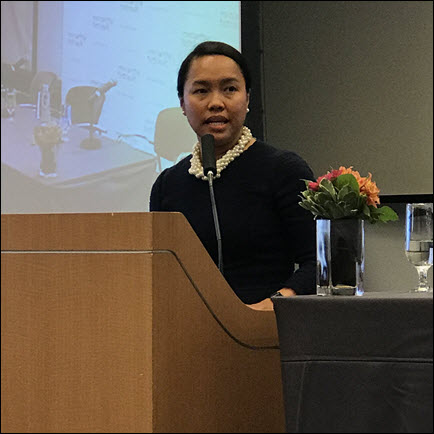 The Sookman-Rothstein interview detailed some of how Canada came to have the Copyright Modernization Act. And in the session that followed, few words were minced about how the act is perceived internationally by Lui Simpson, who is the executive director for international enforcement and trade policy with the Association of American Publishers.

“The rest of the world is monitoring the Copyright Modernization Act,” Simpson said. “It needs a solution.”

The act is, Simpson said, a stark illustration of how much damage can be done to the creative community. Canadians need to spur their government to address the unfortunate education and fair-dealing exemptions in the act, she said. “The mandated review process should be in November this year, but we haven’t heard when that’s coming.”

Simpson highlighted some of the damage the act is said to have been responsible for:

Simpson placed responsibility on the Canadian government to acknowledge that creative works and cultural products are not just entertainment. How does the government truly value creators?

“Rights holders and authors try to engage in a truthful dialogue but are continually out-maneuvered by technology shills.”Lui Simpson

Other countries are watching, she said, and other jurisdictions are looking at draft legislation for exceptions and contract override provisions that favor chaos, with no clarity on the rights of the user vs. the rights holder. “Rights holders and authors try to engage in a truthful dialogue but are continually out-maneuvered by technology shills.”

The Canadian challenge, she said, is to determine what to do to arrest the decline. Some suggestions:

The harm is no longer theoretical, Simpson said. “The world is looking to Canada as an example of how not to do copyright. The world is watching Canada. The Canadian government itself should be conducting its own study.”

Copyright, she said, is not glamorous. Politicians look bad when they’re taking something away from users. People expect things to be free. But copyright is balance. Users are afforded the privilege of using content, but they must pay a price for that privilege. 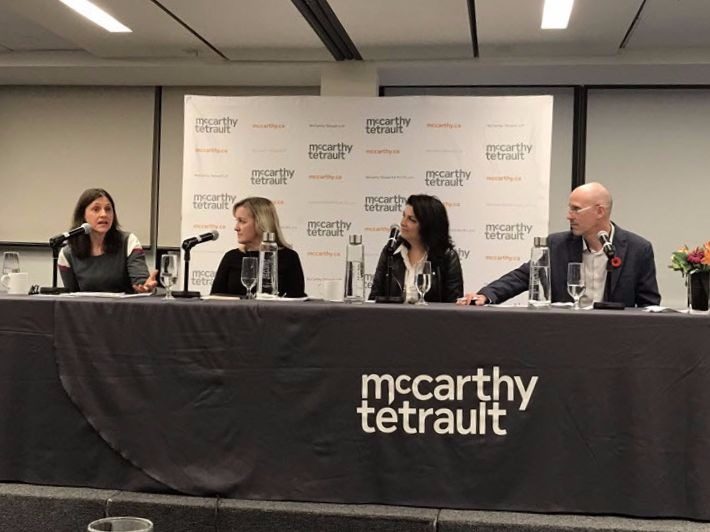 ‘If the Government Won’t Protect My Work, Who Will?’

In the afternoon’s final session, the conference heard directly from a panel of content creators whose royalties have dwindled to a fraction of what they were five years ago.

Led by Kate Taylor of the Globe and Mail, panelists reiterated what had been heard before, but this time from a stark first-person point of view: Royalties are down 80 percent or more. Musicians are more often being asked to perform for “exposure” rather than pay. And everyone, it seems, is being paid except for the creators.

Novelist and journalist Christine Fischer Guy left journalism for teaching, because, she said, she had become a “content provider” who wouldn’t give up the e-rights to her content. What’s more, she was aware that her novel was being pirated but could do nothing to stop it. “If the government won’t protect my work, who will?” she asked.

Singer-songwriter Damhnait Doyle reported a similar decline in revenues because of music streaming, and playwright-composer Scott White told of an instance in which he appeared at a school to conduct a workshop and found the students working from photocopies of his script. “Schools used to pay licensing fees for plays and music,” he said.

In a culture that expects content to be free of charge, the Globe and Mail’s Kate Taylor asked, how do we change attitudes?

The answer she proposes is education, challenging the myth that “creators will always create.”

“Find examples of things,” she suggested, “that will not exist if artists/creators aren’t supported. We’re in danger of producing a bestseller economy. We have people coming to the roulette table to try their luck. Canadian content? There won’t be any.”