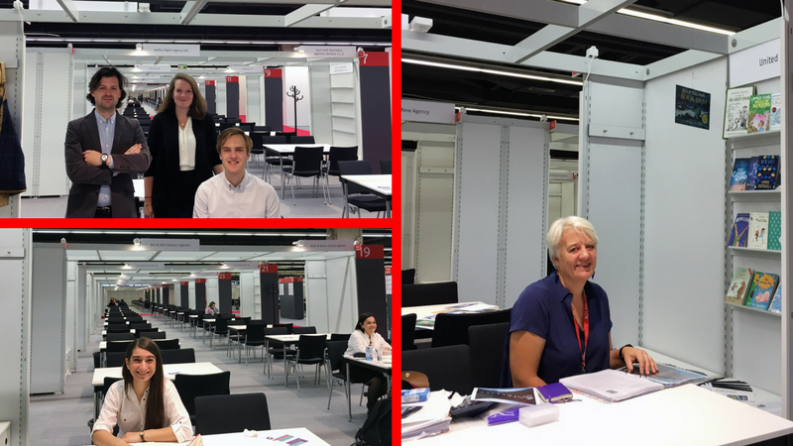 Agents shift their meetings from the hotels to the Literary Agents Center on Frankfurt Tuesday, and some literary agencies share their big books of the fair. 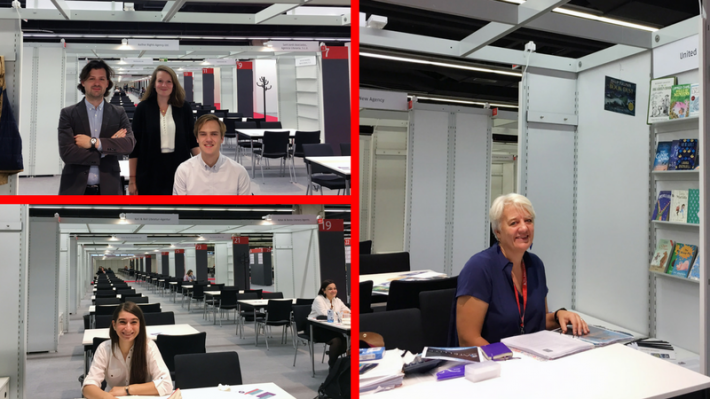 As literary agent Jane Willis of United Agents was organizing her table in the Literary Agents and Scouts Center (LitAg), she said, “I’ve never been a big one for having huge amounts of meetings in the ‘hofs.’ The whole Frankfurter Hof is an adult thing, and I’ve always been in children’s books.

“Last year, for example, I paid 19 euros for a coffee and a mint tea. It’s always so crowded. So here [in the LitAg] it’s so quiet, and I have lots of meetings.

Among Willis’s big titles in Frankfurt this year, she said, is “Philip Pullman’s The Book of Dust La Belle Sauvage coming out on October 19th. It has already sold in 34 languages. It’s volume one of the series which is a sort of prequel to the His Dark Materials series, which sold nearly 20 million copies worldwide.”

“I’m also selling a Laura Dockrill YA clean teen novel (12+) called Big Bones. It’s about a large but happy girl. She is pleased with who she is. She adores food, the descriptions are amazing. It’s about a girl growing up, and the voice is great. It has a broad appeal.”

Six agents from the Amsterdam-based Sebes & Bisseling Agency are taking up two tables in the LitAg this year. They are a full-service agency representing Dutch authors. They also work as subagents for US, UK, and Australian agents, selling into the Netherlands, Belgium (Flemish), and Scandinavia.

On being in the LitAg on Tuesday, agent Lester George Hekking said, “We’re trying to get people to come to the Rights Center on Tuesday we’re all for that. It’s open, so why not use it? It’s so crowded at the Hessescher Hof, you have to fight for a table. Last year we had lots of appointments here, and this year even more, so people are getting used to it.”

The big book that Sebbes & Bisseling brought to Frankfurt this year “is a YA novel called Enchantée by Gita Trelease.”

Also in the LitAg yesterday was the AnatoliaLit Agency based in Istanbul, Turkey. It’s a full-service agency representing Turkish authors and working as subagents and co-agents.

Cansu Canseven, an agent with AnatoliaLit, said: “This is my third year at Frankfurt. The first year I was at the Frankfurter Hof. Then many publishers decided to make appointments here because of the cold and the expense, so this is my second year in the Rights Center. It’s much easier to find someone you don’t know. Here you have a table number, etc.

“Our highlight this year is a book of short stories by Selahattin Demirtaş,” called Seher, said Canseven. It includes a story about a woman murdered in an honor killing. Demirtaş “is a Zaza Kurdish politician and is currently in prison. This is his first work of fiction, which he gave to his wife from prison. We have sold Dutch and Italian rights so far.”