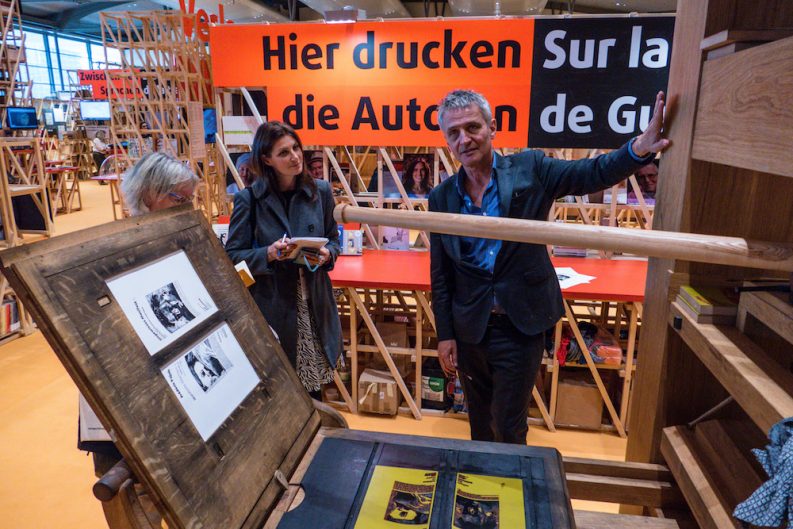 Before the crowds arrive at the Frankfurt Book Fair, we get a preview of the France Guest of Honor pavilion and what inspired this exhibition. 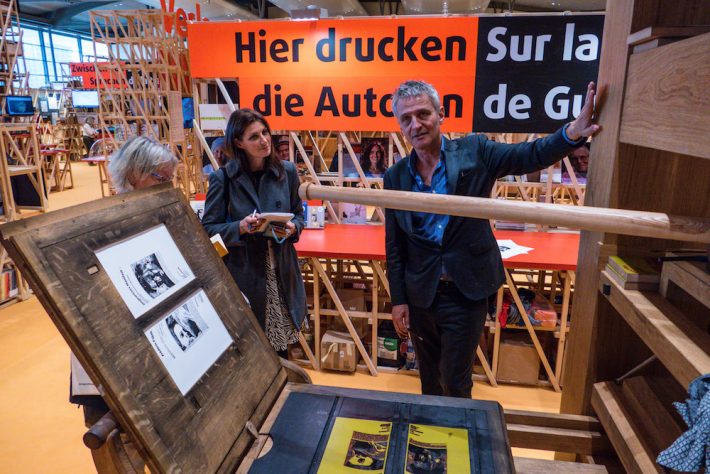 Gabriel De Montmollin shows off a replica of the Gutenberg Press at the France Guest of Honor Pavilion (Photo: Johannes Minkus)

This year’s France Guest of Honor Pavilion was designed by Denis Coueignoux and Éric Jourdan and students from the Saint Etienne Higher School of Art and Design. Light and airy, there are exhibition spaces, sections for children, a bookshop, a brasserie, an area devoted to French book publishers, and a stage.

At the heart of the Pavilion is a replica of the Gutenberg Press that Gabriel de Montmollin, a museum director from Geneva, commissioned. “It’s to show that printing, in those days, had the same overwhelming effect on mentalities as the internet has had today.”

Over 50 Francophone authors will be on hand printing the first page of one of their books in German and French, and doubtless most everyone in the area will be joyfully covered in ink this week.

A small cabin called L.I.R. presents itself as a digital library. Designed by Joris Mathieu and Nicolas Boudier, the inside of the booth reproduces an image of a well that is an infinite library. Visitors take a book from a shelf and scan its barcode, which triggers a hologram of an actor reading from the work.

Comic book fans will not be disappointed. Former director of the Angoulême comics museum, Thierry Groensteen, curated a large space divided into seven themes devoted to the art including traditional comics, reportage, and manga. There is also a screening room showing an 11-minute film about comics adapted to film, such as Marjane Satrapi’s Persepolis. The French comics exhibit is set to travel Vietnam in April, to China, and then to Canada. 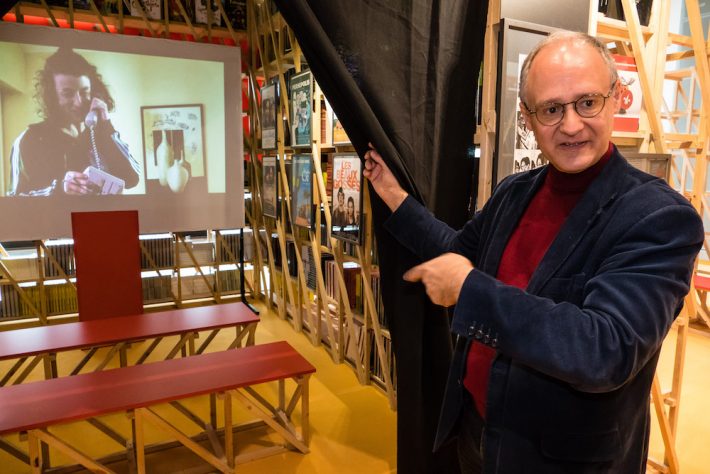 Thierry Groensteen, curator of the comics exhibition at the France Guest of Honor Pavilion, shows the screening room where a movie about comic book film adaptations plays (Photo: Johannes Minkus)

At the S.E.N.S VR booth, an adaptation of a graphic novel by Marc-Antoine Mathieu has been transformed into a virtual reality game in sober, black-and-white lines, staying away from a more sensationalistic universe for a peaceful one.

The children’s book section, curated by Sylvie Vassallo, who directs the Children’s Book Fair in Montreuil, boasts a large space where two authors chose ten words from each letter of the alphabet that were then illustrated by 26 children’s book authors, giving a wonderful idea of the diversity of these illustrations. And children can climb into two small vehicles and listen to teenagers filmed talking to 13 YA authors about what they enjoy reading and what they write about.

Another exhibit highlights 1,500 books written in French and translated into approximately 40 languages, while an additional space conveniently lays out a timeline of the history of French publishing with markers for historic moments, such as the publication of Fantômas in 1855 by Fayard.

All in all, a rich and colorful Pavilion, but do watch the tiny step when walking off the main area to the peripheral hallway.