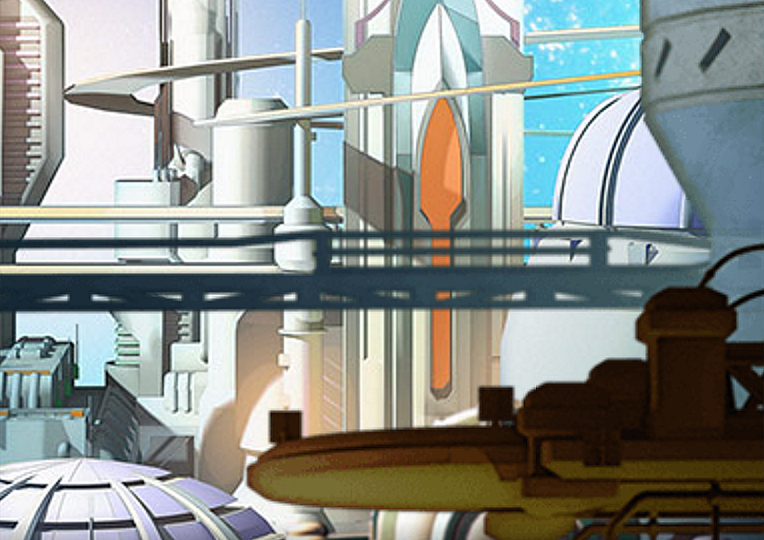 ‘Ebooks are essentially Web sites in wrappers. So what happens if you take the wrappers off?’ One answer: Strata’s layered world. Those familiar with the work of composer and filmmaker Michel van der Aa in his The Book of Sand won’t have to burrow far to find a kinship with the context for Tommy Lee Edwards’ Strata. Not unlike Van der Aa’s vision of Jorge Luis Borges, Strata is a place in which, as PRH’s Dan Franklin tells us, “The creative affordances of the sense of entering a new world” are the key. ‘When you are reading you are essentially hallucinating in your head and we don’t want to get in the way of that.’ — Porter Anderson

‘In a deep mechanical dream, how I wish I had your eyes of steel…’

Click on the link to Strata when you are ready to read it–one might say “play it”–and the screen goes black.

A thin white hexagon appears in the centre. Get used to this motif– you will see it many times again. Touch it and your ears are assailed by a wave of  discordant electronic music and you’re shown a brief introduction:

EUGENICS EXPERIMENTS HAVE FAILED TO CURB THE CITY’S DENSE POPULATION, WHICH DROWNS IN PERPETUAL SHADOWS CAST BY A LAYER OF GIANT TOWERS SCRAPING THE STRATOSPHERE MILES ABOVE.

FURTHER BELOW AN ANCIENT AND MYSTERIOUS WORLD CRUMBLES…

Choose to “Enter World,” and high above your vantage point you can see giant towers of the type futuristic city that’s familiar from comics of the 1950s and ’60s, with a few nods toward Blade Runner and manga such as Ghost in the Shell. Down in the sewers where you are, it feels more like the 19th century–more steampunk than cyberpunk.

“This is an issue surrounding technology journalism in general. If people brought the same level of critique to technology as they use to cover the wars in the Middle East then we would be spared the future of the book becoming a recurring motif.”

The Mechanical Dream musical theme begins drilling into your subconscious as you scroll through the layers of the city. Various levels of animation slide effortlessly across each other. Even on a small screen, they make you want to dive into the stories they have to tell. On a larger display, the sensation is one of tremendous height and depth: it’s a long scroll up and back down. And this is the “cover” of the “book.” Monetization is tied to consumption. As in many in-app models, when you want to read one of the pieces offered such as Outreach by Laurie Penny or Greybox by James Smythe, you’re asked to pay for it.

Welcome to Strata, a new digital storytelling project by the versatile comics illustrator and designer Tommy Lee Edwards and the synth act I Speak Machine, produced by independent label Lex Records in partnership with Penguin Random House (PRH) UK and Google’s Editions At Play, on the homepage of which, the link to Strata calls it, “The book that constructs a world.” Strata comprises three hours of reading time.

Strata is a browser-based app–in other words, a Web site–optimized for mobile.

Editions At Play is a digital source and store for “books that cannot be printed” because they have been created specifically to be used on a phone or tablet via the Internet. Editions at Play is a partnership between Google’s Creative Lab in Sydney and the innovative startup Visual Editions. A dedicated team at the Creative Lab built the site itself.

Publishing Perspectives caught up with Dan Franklin, Digital Publisher at London’s PRH UK. We wanted Franklin to tell us the how and what-next we may be glimpsing in Strata. Dan Franklin: For me Strata is a result of a few things that have been bubbling away.

The computer that is in your pocket. The move to mobile that is going to drive so much media consumption on phones.

The fact that ebooks are essentially Web sites in wrappers. So what happens if you take the wrappers off and use the full capabilities of the web?

Strata and the others book on Editions at Play are basically Web sites built to be experienced on mobile. Books in your pocket if you like. If you watch it on a desktop, you just don’t get the same experience. It is an interesting frontier to explore.

PP: So why does Strata look the way it does?

DF: We wanted Strata to feel like the reader was in the midst of the construction of a new world that can be expanded in different directions or visualised in different forms. Music is a really strong element of its design. We have plans that I can’t go into.

The UI [user interface] allows you to go from the bottom to the top of the city and get different experiences from each stage. We commissioned four stories about food production, synthetic neural biology, infectious diseases, and law enforcement set in this dystopia, and alongside them non-fiction essays that underpin them.

This is a very novel idea and the browser that allows you to toggle between the two [“Fiction” and “Science”] is aligned to illustrations and ambient music. It really feels like entering into a fictional universe.

I am trying to avoid using the word “immersive”!

“We may have another round of commissioning around four other topics like eugenics, although there is no reason why it has to be dystopian. It could be utopian.”Dan Franklin

PP: This sounds like you are talking about Virtual Reality. Are you?

DF: Rather like some of the first apps for the iPhone were about holding a virtual lighter, I think we’re still at the literal end of Virtual Reality, where it is all about exploring spaces.

It can offer some very intense visceral experiences.

When it comes to what we do, we have to proceed with caution, as when you are reading you are essentially hallucinating in your head and we don’t want to get in the way of that.

So we are feeling it out, seeing what happens, and at some point we will make a foray.

PP: This sounds rather conservative?

So I would say Strata is relatively conventional rather than conservative. PP: The quality of writing in some digital projects in the past has been criticized. Is this why you are using established rather than new writers?

DF: There are are many talented writers and writer-developers in areas like interactive fiction. I think the work of Failbetter Games on Fallen London and Sunless Sea is outstanding. Rob Sherman is another brilliant writer to watch going forward. Meg Jayanth wrote the 80 Days app and the writing has received widespread praise. There’s also Emily Short, a long-term practitioner.

As Strata is an example of building a new world, we deliberately went to speculative fiction authors on an upward trajectory, or in Laurie Penny’s case stepping into it for the first time, as well as established thinkers on the future-facing topics underpinning the fiction, themselves quite speculative. I am thinking especially of Misha Glenny’s, which is a piece of reportage from 100 years in the future.

We then set parameters for the writers to play within and only brought them together at the end.

Image from Strata.world, the Fiction side. Illustrations led by Tommy Lee Edwards.

PP: Some of the stories are estimated to take 45 minutes or longer to read. Isn’t this rather long for mobile?

DF: I think all the content would take about three hours to read. The approach of using stories and essays is that you can read in stages–compose the world in stages. As such, there are essays you can get through in 10 minutes and longer stories that take the best part of an hour. I think this isn’t an unprecedented behavior in the burgeoning digital story arena or popularity of #longreads for those wanting more in-depth journalism.

PP: How does Strata fit into the narrative/false narrative of the return of print and decline of digital?

DF: I think it’s important to keep rowing forward, against the tide if necessary, when print remains relatively robust.

We weren’t trying to reinvent the wheel when it came to the reading experience here: there are many elements of it that don’t need tampering with.

What was intriguing was the creative affordances of the sense of entering a new world, which is where smartphones hold a lot of power.

PP: How then does Strata fit into the future of the book?

DF: Well, there are futures of the book. It is telling that still every few months someone can come out and say they are doing the future of the book, get a cursory write up, and no one will think too deeply about it.

Actually–and no offence to you [none taken]–but this is an issue surrounding technology journalism in general. If people brought the same level of critique to technology as they use to cover the wars in the Middle East then we would be spared the future of the book becoming a recurring motif.

People don’t respond to the innovation angle when it comes to the future of the book. They respond to experiences and story. So we need to find new ways to talk about this that don’t foreground the technology.

PP: Almost two months on since its launch, how has Strata been received?

DF: It’s been well received by the various audiences of the contributors, and Tommy’s fans, which is great.

PP: I guess what everyone wants to know with digital projects – has it made, can it make, any money?

PP: What’s the next step for Strata? Are you going to turn it into some kind of Stars Wars universe?

DF: It could be like 2000 AD or Judge Dredd, where there are a lot of different scenarios, but they don’t need to be the same character or know the others.

We may have another round of commissioning around four other topics like eugenics, although there is no reason why it has to be dystopian.

It could be utopian.

However, it is still early days; we’ll see how it all fits with Editions At Play’s forward plans.

PP: How does it fit Random House’s future plans?

DF: Well, it’s on the innovative side of things. It allows us to make interesting partnerships that let us explore how the business might evolve and which draw on the editorial expertise of the group.

PP: And what’s next for you?