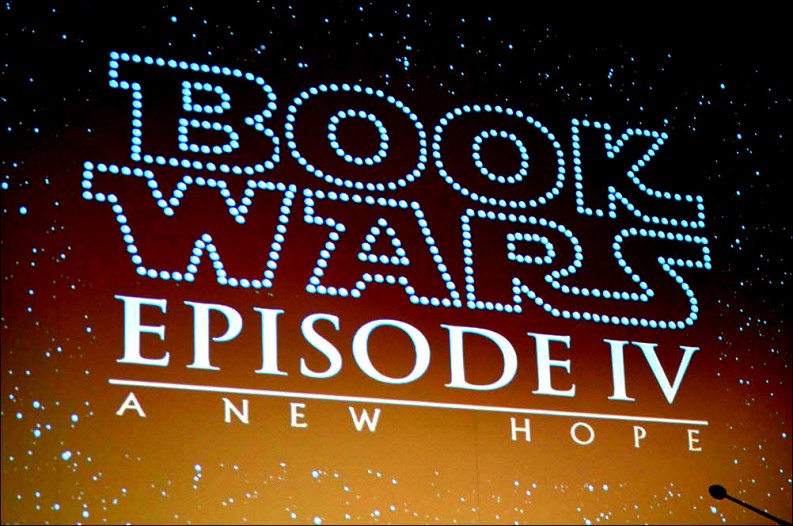 We have yet to make a satisfying gift of an ebook, said Nielsen’s Andre Breedt at BookInsights in London. Such breakthroughs still seem far, far away. As reported by Lisa Campbell at The Bookseller, Nielsen Book’s Steve Bohme at this week’s BookInsights Conference in London said that sales of self-published ebooks accounted for 22 percent of the digital book market in the UK in 2015. You’ll see Roger Tagholm refer to that part of the day below, when he references “Amazon/self-published” titles. And while the 22 percent is a handsome rise from Nielsen’s 16 percent in 2014, the  fact is that we don’t know how many ebooks Amazon sells. Seattle doesn’t release those sales figures. How, then, does Nielsen arrive at those unknown sales’ percentages in the overall ebook market? We asked Nielsen Book’s Director of Research Jo Henry for an explanation. We’ll tell you what Henry says about it just after Tagholm’s report.— Porter Anderson

China’s book market grew by 12.5 percent in 2014. Italians love their fiction, with the market in 2015 some 11 percent higher than the 28 percent average. Children’s books are much more important to Australia and New Zealand, than to Brazil, India or European markets. And there were an estimated 25 million coloring books sold in the US last year.

These were some of the ‘sights’ on Nielsen Books’ Senior Vice President and Global Managing Director Jonathan Stolper’s whistlestop tour of the global book trade at the Nielsen BookInsights Conference in London on Wednesday. It was a fascinating avalanche of data with figures coming at the audience almost as fast as the intergalactic spacecraft used by Nielsen Book’s UK Research Director Steve Bohme in his UK presentation — which entertainingly took a Star Wars theme. “China’s book market is growing fast, if not faster, than almost all other book markets,” said Stolper. Nielsen partners with the Chinese retail tracking service Openbook to gather data in that vast country.

“Taking a closer look we see that the children’s book market in China has maintained rapid growth and expansion. The value share of the market was less than 10 percent in 2004; today, it’s closer to 20 percent.

“In fact, in 2015 the number of published children’s frontlist titles in the physical book channel grew by almost 29,000 — that’s a 15 percent growth rate in a single year in title production in China.”

“There are differences between the buyers and the consumers,” he said. “Children themselves are the main buyers in physical stores and gravitate towards popular literature; while parents are buying picture books, classics and educational books for their kids online.”

‘Four-Percent Decline in the US Physical Bookstore Market’

In the US, Stolper said that overall unit sales for ebooks were down 4 percent in 2014, and that 2015 looks even tougher. “We see that ebook sales are down almost another 4 percent this year. Looking at fiction, it’s minus 3 percent; adult non-fiction minus 4 percent; juvenile fiction minus 32 percent.”

He noted that in the UK, there is almost a 50-50 split between book buying in physical shops versus online.

“If we’re looking towards the future and what’s likely to happen next, it will be led by the devices more than by the content.”Andre Breedt, Nielsen Book Director of Client Services, Intl.

“In the US, this split is 56-44, in favor of bricks and mortar,” he said. “That represents a 4-percent decline in the physical bookstore market in the US in the last 12 months, something that is a little disturbing for publishers in the US.”

In the US, he observed that the book market’s compound annual growth rate over the last 10 years has been flat. “So while revenue for the US book market is steady and not in decline like some other forms of media, it’s not growing, making it a tough environment for publishers tasked with growing the business. As a result, publishers will look towards and focus on, acquisition, global expansion and naturally, as we all know, digital reading.”

‘A Rise in Purchasing of Amazon/Self-Published Titles’

*In the UK, the market saw a 4 percent rise in volume and 5 percent rise in value in 2015, which will send publishers into next month’s London Book Fair with a smile on their faces. Steve Bohme said: “With the average price paid for these Amazon/self-published ebooks still around half the price of ebooks from ‘mainstream’ publishers in all main categories, the overall price paid for ebooks fell by 1 percent in 2015.

“In contrast, the average price paid for print books rose by 2 percent.”

There were some interesting comments from Andre Breedt, Director of Client Services for Nielsen Book Research International, who likes to stand back and take a wider overview of where we are. “As people,” Breedt said, “we have a propensity to be really terrified and/or excited by any new thing. We assume it’s going to completely take over.

“Then, when it doesn’t completely take over, we often begin to discount it, to say, ‘Oh well, that’s over now.’ And it’s at that point that the thing really takes off. So, if I had an overall argument, it’s that the digital revolution isn’t finished yet — in a way, it’s only just begun.

“There is no Christmas in ebooks. You don’t see that spike that you see with physical. I cannot overstate this enough.  As we move towards a more digital economy, digital gift-giving is a fundamentally difficult concept.

“A digital object is a pretty crappy gift. I can’t actually give it you. I have to send you a voucher or an email. And we haven’t solved that as a problem. I think it’s so important for us as a trade that has such a high percentage of our income from the gift market. If we can’t fundamentally solve the problem of giving a gift online or giving a virtual gift, in the fullness of time the industry will suffer.”

“In many ways, he said, there would be no ebook market had there not been heavy investment by large retailers and technology companies into the devices.  Much of the whole digital entertainment market has been led by tech companies, not by the content creators.  So I would argue really strongly that if we’re looking towards the future and what’s likely to happen next, it will be led by the devices more than by the content.”

Although people do use tablets for reading, he reiterated the oft-made point that “books are way down the usage chart,” saying, “If we think about books on a tablet, the largest competitor is not another book – it’s the Net, the work email.”

‘To Market the Idea of a Slower Narrative’

Breedt said he wondered whether publishers couldn’t learn from the prompts and alerts made by apps, Facebook, WhatsApp – whether some of the reminders those services use couldn’t translate into the book space. “Perhaps there is an opportunity to be more aggressive in how we call attention to our product.”

Another interesting suggestion concerned marketing, with Breedt asking whether the industry needs to alter its approach.

“As an industry,” he said, “we have always been pretty good about marketing the ideas in a book, but maybe we have to market the idea of the idea, the idea of narrative, the idea of a slower narrative against a high speed US TV drama.”

And finally, he put up an extraordinary slide — the Gartner Hype Cycle of Technology, a visual representation of how we react to new technologies, developed by US tech company Gartner. In simplified renditions, it describes a “Peak of Inflated Expectations,” a “Trough of Disillusionment,” a “Slope of Enlightenment,” and a “Plateau of Productivity.”

Breedt says that he believes Virtual Reality (VR) has shifted somewhere along this chart and is now heading for the Plateau of Productivity.

When Bohme called his presentation “Book Wars: A New Hope,” he wasn’t referring to VR. But in the content space it’s always hard to predict what’s around the corner: No one saw coloring books coming.

Nielsen Book’s assertion this week at the BookInsights Conference that “Amazon/self-published” ebooks accounted in 2015 for 22 percent of the UK ebook market was a red flag to many observers who know that Amazon doesn’t release its sales figures on the indie-ebook sector. Wondering how the company came up with that estimate, we asked Director of Research Jo Henry what methodology is used to arrive at that statistic.

Helpful and knowledgable as always, Henry got right back to us. It turns out that the information behind that assertion comes from the consumer panelists used in Nielsen’s process. Here is Henry’s answer: “We ask respondents for the ISBN of the book they have purchased and as they take the survey, this is matched against industry bibliographic databases (which do include some self-published ebooks) through an API look-up.

“If the respondent checks that what the search returns is the book they bought, then the survey automatically fills in the publisher, etc.  If there is no ISBN, we ask for author and title and the search is repeated.

“So if all works perfectly, when the raw survey data reaches us, we know who the publisher is and anything like CreateSpace [Amazon’s print-on-demand division] or similar organisation gets identified as self-published.

“If no match is made at either the ISBN or title level, the publisher field gets left blank, so once we have the raw data in house we do an exhaustive manual cleansing process, which includes hand-coding the publisher to records that are missing them.

“At this point we don’t just search industry databases but also Amazon to identify as self-published anything that is a known self-publisher (CreateSpace, etc.) or, for example, where the author and the publisher name is the same.

“This process obviously relies on our industry knowledge to a large extent and won’t be 100-percent correct.  But we’re satisfied it picks up the minimum amount of self-publishing — though we are probably missing some of the market!”