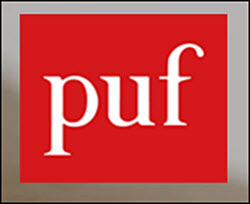 The Espresso Book Machine from On Demand Books uses a Xerox 4112 to print a book on-site at a store. Image: Promotional Xerox brochure

Now, the Associated Press reports, the store has reopened, with a remarkable 3 million titles available for sale in a space of only 72-square meters, or 775 square feet).

“This is the first all-digital bookshop in Europe that sells books on demand only,” PUF general manager Frederic Meriot tells The Associated Press (AP). “It is a model for the future, a model in which digital and paperback books can work together.”

It’s a model made by the Espresso Book Machine, a “robot” that prints, binds and trims books in mere minutes. The machine uses two separate PDFs — one for the text, and another for the cover. The text is black and white; the cover can be printed in color. AP reports that the covers of the books are “a bit sticky compared to those of traditional paperbacks because of the gloss used during the process, the machine produces library-quality books sold at the same price as in traditional bookshops.”

The machine itself has been around since 2006, when the first was installed, albeit briefly, in the bookstore of the World Bank. Now, there are more than 100 in use in libraries and bookstores around the world. According to Meriot, the POD model that PUF is developing along with its traditional publishing ventures “has a bright future.”

“Not only because at an equivalent price all readers, even among the young generations, prefer paper to digital,” he said.

“With the Espresso Book [Machine’, we don’t need warehouses to stock the books, we don’t spend money to pulp the already printed that didn’t sell, and it’s also a low-carbon way of making books.”

Fifteen books have to be sold on a daily basis in order to break even. Sixty were sold on the first day of business for the reopened PUF.

“It was almost a riot,” Meriot said. “Our booksellers didn’t even find the time to take a break for lunch.”

As of now, approximately 5,000 titles from the PUF catalog are on the shelves of the bookstore, with an additional 3 million titles “from other publishing houses and source put together by On Demand Books – the company behind the Espresso Book Machine – available on demand at the shop.