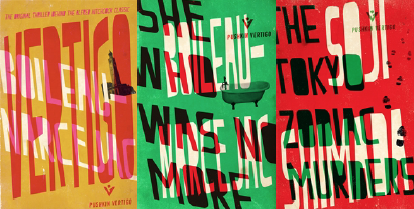 Pushkin Press has announced the launch of a “uniquely-branded,” foreign crime imprint, Pushkin Vertigo, in September 2015.

On the heels of last year’s announcement of the launch of Pushkin’s Children’s Books, Pushkin Press has announced the launch of a “uniquely-branded,” foreign crime imprint, Pushkin Vertigo, in September 2015. The series will feature crime classics from around the world, including titles from France, Spain, Austria, Japan, the USA, and Italy.

With jackets designed by Jamie Keenan, hopes are that the series branding will “stand out” in bookstore crime sections as beautiful, trendy — and collectible.

Focused on republishing thrillers by international masters from the 1920s to the 1970s, Pushkin Vertigo aims to “create the ideal library for fans of the genre,” by offering them an experience that goes beyond the book itself: each title will have “content rich endpages”), that explore the world of the book and author, supported by a new website that will serve as a center for information on and discussion of international crime fiction.

Pushkin Press has acquired twenty titles to date, six of which will be launched between September and November of this year. Some of these titles have been previously been available in English, but “never properly discovered and widely read”; while others have never before been published in English.

Stephanie Seegmuller, co-Editor of Pushkin Vertigo, said “The Pushkin Vertigo books are truly for everyone who loves classic crime, from Agatha Christie to Raymond Chandler.”

And in a statement quoted by The Bookseller, Co-Editor Daniel Seton said,

“We have long believed that there is a gap in the market for more translated fiction in the UK due to a reticence on publishers’ behalves rather than on the part of British readers. We thought it was high time we brought Pushkin Press’ reputation for unearthing hidden literary gems to this new area.”