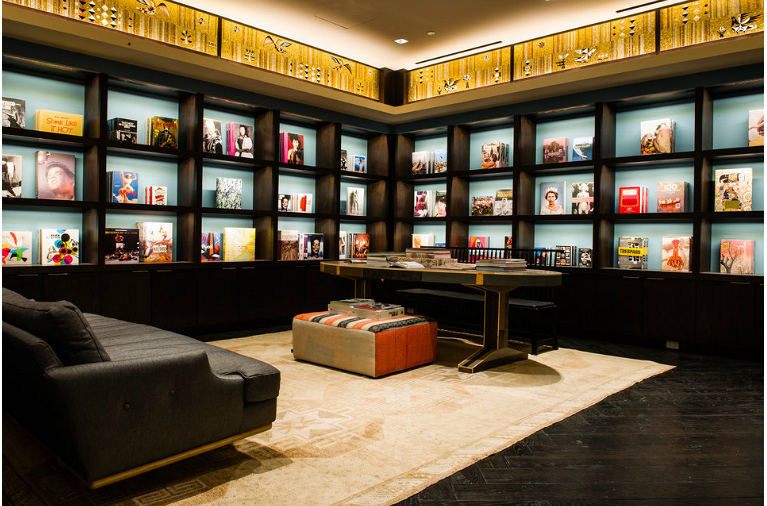 Several high-end book publishers have made forays into hotel retail and hotels are adding lobby libraries, but are these merely pleasant redundancies?

Walk into the lobby Dallas’ Joule Hotel and, alongside Traffic LA and Tenoversix, two high-end clothing boutique and accessories shops, you’ll find a Taschen Bookstore. In the rooms, you’ll find several Taschen books piled up alongside the obligatory local scene mags and room service menu. You can take home the books if you so choose: they’ll just be added to your bill when you check out, along with the umbrella you borrowed and left behind at the bar last night.

Several high-end art book and illustrated book publishers have made forays into hotel retail. Taschen has a growing network of stores in cities ranging from Beverly Hills and Hollywood, to Cologne, Amsterdam and Miami. Assouline runs boutiques at Claridge’s hotel in London, The Mark and The Plaza hotels in New York, not to mention other stores in Venice, Lima, Mexico City and Istanbul, among other cities. And as discussed today, Folio Society is opening its own individual displays in bookstores.

Assouline’s store inside Claridge’s in London.

These publishers focus primarily on art and illustrated titles that naturally lend themselves to displays in a retail environment and are pricey. It makes sense that the stores are in these posh locations. The rents are high, but so are the prices of the books. Naturally, it makes sense that these retailers are attracted to opening up in fancy hotels, where the “rent” for a single night can run into several hundred, if not, thousands of dollars. It’s differential marketing at its best.

But I wonder how often customers truly shop the stores, or whether or not they are simply an extension of the décor?

Actually, books are often part of the decor. Walk into many hotels these days and you are likely to find a “library” somewhere off the lobby. The library might have a selection of “leave a book/take a book” titles left by previous residents, a pile of illustrated photography books on local themes, or else shelves lined with remainder titles all with spines in a color that matches the carpets. Rarely have I ever been in one of these libraries and watched anyone pull a book from the shelf and read it cover-to-cover. Usually, the libraries are filled with people sitting with their friends nursing drinks and picking at plates of oily olives. The libraries, it seems, often serve as quiet extensions of the lobby bar.

That said, I find the environment of a hotel perfect for reading. I’m often alone, in a strange city, and — by the end of the day — quite exhausted from work, exploring or pleasure-seeking. I look around the room and have a few choices to entertain myself: the internet (nah, that’s work), the TV (with its over-priced on demand movies), the mini-bar (bad idea). A book is an ideal companion. But speaking of myself again, I always carry one with me. Even if I don’t, I often don’t have energy or desire to get up, get in the elevator, and confront the party crowds in the lobby to get to the “library” and seek out something new or old.

Maybe it’s just me, but e-readers have seemed to make the hotel library a bit of a pleasant redundancy. Now if someone enterprising would start leaving fiction and nonfiction titles in hotel rooms for me to peruse, they might really be onto something…