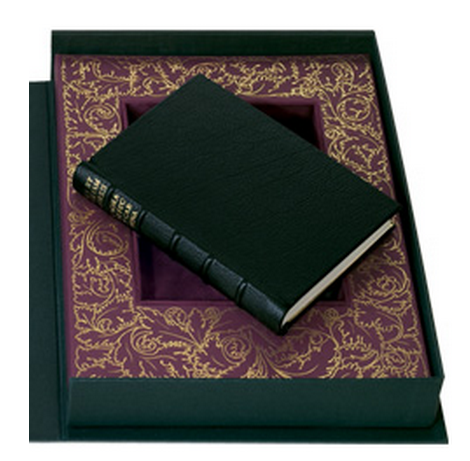 The Folio Society, the UK publisher of up-market limited editions, is moving into retail, innovating in print, and continuing to seek out the best writers have to offer.

The Folio Society, which publishes beautiful, hard-bound editions of classic works of fiction and nonfiction, is best known as a mail-order, catalog-driven operation. It has been a membership society since 1947. For for much of its 66-year history, the publisher only sold its titles through a membership and subscription program. At any one time, the company has between 80,000 and 100,000 members, people who are required to spend $200 or buy 4 books a year to retain their membership. The company also reports that there is are “low tens of thousands of people who buy one or two books or a handful at Christmas.”

But that has started to change. In 2011, Folio opened up online purchases to non-members through its website. Perhaps more dramatically, it also recently began distribution of its titles to key bookstores in the UK, in department stores such as Harrods and booksellers, including Waterstones. Earlier this year it expanded operations to US, with placement in stores including New York’s Books of Wonder, the Readers and Writers Shop at the New York Public Library, and the Community Bookstore in Brooklyn. The company is also looking to find a location in Boston later this year.

Our Books are Very Tactile “The big mantra here is get the books in people’s hands, when people see them, if they are book lovers, they are a different quality than a normal trade book, said Toby Hartwell, who served as Managing Director of the Society for four years before stepping down last week.

“We started in the UK because I was looking for partnerships with like-minded organizations,” he added. “We have a good and healthy partnership with the British Museum and have a careful display in the Grenville Room – it is retail, but it is retail display. I want to showcase the books in places where our kinds of buyers can find the books.

Books that are sold at retail are out-of-copyright titles, rather than current or contemporary editions that Folio has licensed. The full range of titles can be found at Folio’s own retail location it operates out of a storefront inside its offices in Bloomsbury, London (where, said Hartwell, “three bookstores have closed within a mile radius over the past few years.”)

“While retail will never be a major part of our business,” said Hartwell, “We still had to find opportunity for people to see the books. The books are great value for what they are because they are so well made. They are very tactile, which makes them something you want to hold, smell and see. ”

The company was founded in 1947 by Charles Ede, a book lover and is today owned by printing magnate Lord Gavron, who took over the company in the 1990s. Today the company employs some 80 people and publishes 50 to 60 new books a year, while maintaining a backlist of some 450 titles.

“There is a lot of turmoil in the market. We are a craft publisher, and we know what we do well,” said Hartwell. “We see ourselves at the vanguard of the printed book. Every year, we are putting more effort into our books in the sense of illustrations or bindings — our production director is very particular.”

Printing is done, whenever possible, in the UK, while is also outsourced to other binderies and printers throughout continental Europe, including Spain, Switzerland, Italy and Malta.

As examples of recent publications, Hartwell pointed to a new edition of William Morris’ Odes of Horace, which incorporated two different gold inks, and an edition of The Day of the Jackal by Frederick Forsythe, has which incorporates as slipcase with a hole in it featuring the sights of a gun, echoing those of the sites of the assassin who is trying to kill Charles De Gaulle in the novel. An illustration from Folio’s edition of The Day of the Jackal.

“We are illustrating books that haven’t been illustrated before, that is where we continue to innovate,” said Hartwell, citing a new edition of James Joyce’s Finnegans Wake illustrated John Vernon Lord (an experience Lord described as “impossible”) as one example, as well as editions of Tolstoy’s War and Peace. “And we are constantly seeking out new illustrators — we hired a 22-year-old to illustrate Asimov’s Foundation Trilogy.”

In another example, Hartwell points to the company’s decision to enlist musician and author Patti Smith to write an introduction to the company’s forthcoming edition of Emily Bronte’s Wuthering Heights.

Changing with the Times

Perhaps the company’s most visible move in recent years was sponsorship of The Folio Prize, a £40,000 book award that was created to recognize and celebrate the best English-language fiction from around the world, published in the UK during a given year, regardless of form, genre or the author’s country of origin. It is the first major English-language book prize open to writers from all over the world. The winner was announced this past March: George Saunders for his collection of short stories Tenth of December (Bloomsbury).

“We have nearly 250 authors around the world who select the books. That is a great way to find the best fiction of our time. Great writers can do that,” said Hartwell.

In the end, it may be ultimately, also, about reaching new readers. “The US is 35% of turnover, UK is biggest market, we see passionate responses from our US customers, very gratifying to see them say ‘continue to do what you do.’ With everything we do — the retail operations, the innovation, the Folio Prize — we are trying to build a new coterie of buyers. We are not trying to change the world, but are trying to change and encourage to appreciate what great writing is all about. While sometimes people might think the printed book is a bit ‘old fashioned,’ we see the printed book as having an incredibly important role to play — and we are changing with the times.”