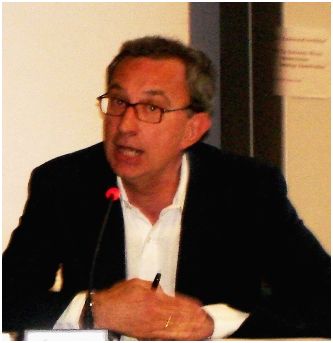 Besides the usual problems plaguing the world of books, Italy’s book readership is smaller than in neighboring European countries and it has few, if any natural foreign markets. This means Italian international literary agents must be creative and nimble in their own market and abroad. Agent Marco Vigevani: "Publishers pretend to like us even if we know it’s not true."

Literary agents are not new to the scene in Italy even if a good percentage of authors still work directly with publishers. Prior to the 1960s there was just one international agency working in Italy — ALI (Agenzia Letteraria Internazionale), which was founded in 1898. It became a European powerhouse in the 1960s when agent Erich Linder ran it; ALI represented a great number of important Italian authors including Dino Buzzati, Eugenio Montale or Leonardo Sciascia. Then the Eulama agency opened, founded by the German-Argentinian Harald Kahnemann, and after Linder’s death in 1983, former colleagues of his established other agencies.  Traditionally, though, many Italian writers used their lawyers to represent them, said Marco Vigevani, who runs one of the most successful of the newer agencies — he founded his in 2001.

“Erich Linder was so powerful that to a certain extent Italian publishers were used to being controlled by him so that by the 1960s and ’70s they had a precise idea of what a literary agent was.”

That said, the process of submitting books and getting offers from publishers “is slower than in the UK or US because here the major publishers also have a reservoir of authors that come to them,” said Vigevani.

“The market is not as reactive as in the US and UK. But publishers pretend to like us even if we know it’s not true. We have to be exigent and understand their needs up to a certain point.”

Most literary agents in Italy come from the world of publishing, and Vigevani is no exception. Moreover his father was a writer and a poet. He began in foreign rights at Longanesi and Guanda where he also acquired foreign titles and then moved on to Mondadori where he worked as an editor for 13 years.

“You used to stay at a place for a long time,” he commented. At the end of his tenure Vigevani was in charge of non-fiction and mainstream fiction, which was invaluable experience for his future role as an agent. Vigevani took a year’s sabbatical in New York, where he was a visiting scholar at Columbia University. While in New York, several publishing houses and literary agencies made him offers, and “when I thought about what I really enjoyed about publishing it was dealing with authors, and I had a good relationship with many authors. It was during these months that I decided to establish my own literary agency.”

Vigevani started his agency along with Claire Sabatié-Garat, who became a partner in 2006. Sabatié-Garat had worked for French publishing companies, among which, Gallimard Jeunesse, but had been living in Italy since 1998. Chiara Piovan joined them four years ago. Vigevani’s agency represents Italian authors, among whom Diego De Silva (published by Europa Editions last February), Mariapia Veladiano (to be published by Quercus) and Andrea Bajani (to be published by MacLehose Press), handles foreign rights for titles published by Laterza, and also represents foreign clients such as publishers Carl Hanser, Farrar Straus & Giroux, Bloomsbury, and Workman.

Vigevani tends to oversee Italian authors and German publishing houses while Sabatié-Garat handles foreign clients and Piovan sells rights abroad, but in the end, “everybody does everything,” said Vigevani.

These days “we are focusing on fiction rather than non-fiction. There is a lot of interest in new fiction authors; we scout for new writers. In recent years there has been a move in the Italian market towards mainstream and entertainment fiction and literary authors have been increasingly difficult to sell, as has serious history and serious popular science.”

There has also been a shift in the Italian market in favor of Italian authors.

“I would say when we started out, 65% of our business came from foreign clients and 35% Italian authors. Now Italian authors are much more important for us as business,” remarked Vigevani.

Vigevani’s agency is very active in the promotion and launch of their clients’ books as their window of opportunity is small as are print runs, which usually number 3,000.

“Literary festivals in Italy are very successful and are mainly held in the fall, readers are also very receptive to book tours,” said Sabatié-Garat. “We have to try to find a way for authors to be in media which is difficult because we only have one television talk show about books and one radio show.”

However, remarked Vigevani, “festivals don’t always translate into big sales. There is a huge gap between the presence at festival and sales.”

Vigevani works closely with bookshops and now, as everywhere, the downtrend is increasingly difficult, including FNAC’s difficulties in Italy.

“Independent bookshops are suffering, they are not subsidized by the state [as in France]. Bigger shops like Giunti or Feltrinelli can survive, but it can still be challenging to find a bookshop or a book here,” said Sabatié-Garat.

Although in Italy there is a fixed book price, Vigevani noted that to cope with lesser sales, publishers have lowered the prices of their books dramatically. Publisher Newton Compton, for example, decided to launch hardcover commercial fiction for less than 10 euros. “The result is that publishers sell fewer copies for less money.”

On the brighter side, “there is a real attention by foreign publishers for Italian writers,” said Sabatié-Garat. “Crime, mafia, and historical fiction are very popular.

The agency also energetically sells film and television rights abroad: “if the book is very international we look for producers abroad and then we come back to Italy to find partners.”

Sabatié-Garat cites the example of author Francesca Melandri’s book, Eva dorme (Eva Sleeps) which is set in the autonomous South Tyrol region of Italy and is culturally Austro-Bavarian.

In the end, said Vigevani, “We have to try to be more attractive and more creative because the situation is very difficult and it has been so already for a year.”

DISCUSS: What Resources for News on Italian Publishing Do You Use?