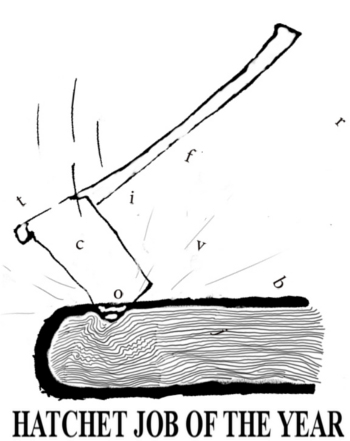 Today, eight finalists were announced for the Hatchet Job of the Year Award, a prize established to honor the most viciously scathing works of literary journalism. The nominees include Ron Charles’ review in the Washington Post of Martin Amis’ Lionel Asbo, which he called a “ham fisted novel” loaded with “blanched stereotypes” which leaves the reader with a “misanthropic vision of human suffering compounded by venality and lust,” and Zoe Heller’s look at Salman Rushdie’s memoir Joseph Anton in the New York Review of Books, which made clear her dictate for his “magisterial amour proper” while concluding that “The world is as large and as wide as it ever was; it’s just Rushdie that got small.”

Other “honorees” include historian Richard Evans’ critique of A.N. Wilson’s Hitler: A Short Biography in The New Statesman (which opens its assault by stating “It would take more space than is available here to list all the mistakes in the book,” before going to add “stale, unoriginal material…banal and cliché-ridden historical judgments”), Craig Brown’s review of The Odd Couple, Richard Bradford’s look at the friendship between writers Kingsley Amis and Philip Larkin, written for Mail on Sunday, which he dismissed as “a triumph of ‘cut and paste’ — indeed, such a triumph that by now Bradford must be able to press the Command button and C for Copy simultaneously in his sleep,” Claire Harmon’s view of Andrew Motion’s Silver: Return to Treasure Island for the Evening Standard, “It’s not just that this plot is both boring and implausible, the characters as wooden as absent Silver’s leg and the sentiments screamingly anachronistic.”

And there’s more. Camille Long’s assault on Rachel Cusk’s Aftermath for The Sunday Times, (“The book is crammed with mad, flowery metaphors and hifalutin creative-writing experiments. There are hectic passages on Greek tragedy and the Christian concept of family, as well as fragments of ghost stories, references to the Anglo-Saxon heptarchy, and heavy Freudian symbolism, including a long description of the removal of a molar, “a large tooth,” she writes portentously, “of great…personal significance”. The final chapter is an out-of-body experience — her situation seen through the eyes of her pill-popping Eastern European au pair. Oddly, I read the whole thing in a Bulgarian accent,” Allen Massie’s look at Craig Raine’s The Divine Comedy in The Scotsman, (“Who is offended by the “Ode to a Nightingale,” David Copperfield or The Cherry Orchard? Bad writing on the other hand will indeed often seem “disagreeable,” and this book is an example of that truth,”) and Suzanne Moore on Naomi Wolf’s controversial Vagina for The Guardian, (“Yet again we see neuroscience in the hands of the layperson being fused to very determinist ends. Thus neural pathways are formed, chemicals just do one thing, hormones rule. Actual scientists don’t think so simplistically, however many rats they have tickled to orgasm.”)

The prize was founded by the literary website The Omnivore to reward the “angriest, funniest, and most trenchant” review published in a newspaper or magazine. As it said about last year’s award, “It rewarded honesty, wit and good writing. It condemned mediocrity, sycophancy and lazy adjectives. It put the reader first.”

This year’s winner will be announced on February 12th, and will receive a year’s supply of potted shrimp from the award’s sponsor, The Fish Society.