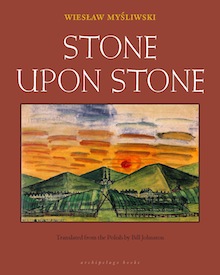 On May 4 at independent bookstore McNally Jackson, the winners of this year’s Best Translated Book Awards (BTBA) were announced. In fiction, the winning title was Stone Upon Stone by Wiesław Myśliwski, translated from the Polish by Bill Johnston and published by Archipelago Books. The poetry winner was Kiwao Nomura’s Spectacle & Pigsty, translated from the Japanese by Kyoko Yoshida and Forrest Gander, published by Omnidawn Publishing. The award event was part of the PEN World Voices Festival, a series of literary events in New York City featuring authors from around the world. “It’s extremely satisfying to be able to give these authors and translators such a significant cash prize,” said BTBA co-founder Chad W. Post, “and it’s especially pleasing to do so in this environment — at such a great bookstore, during such a great festival.” The BTBA is organized by Three Percent of the University of Rochester and is the only prize in the United States that recognizes international works of literature in translation. For the second year, the prize is supported by Amazon in the amount of $20,000. The prize money is distributed between the winning authors and translators.