In its 10th round, the Bologna Prize for Best Children’s Publishers of the Year names its winners across six regions. 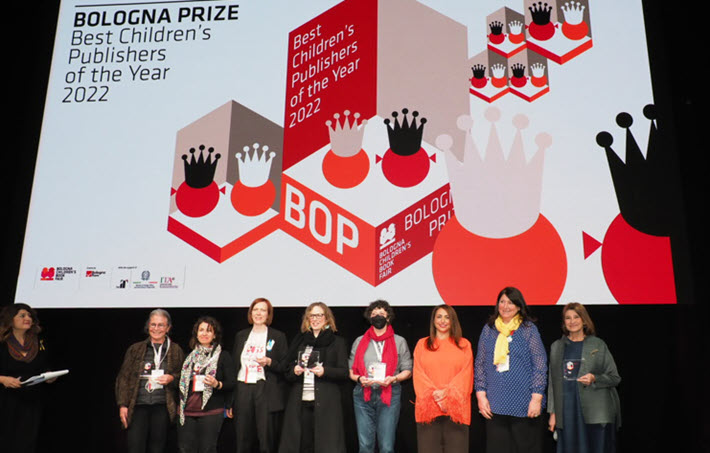 As Publishing Perspectives readers know, the Bologna Prize for the Best Children’s Publishers of the Year is “the big one” in terms of bragging rights. Publishers in many parts of the world proudly display the news of their wins of “BOP” awards for years after they’re conferred.

On Monday (March 21), the opening day of the the 59th Bologna Children’s Book Fair, the traditional awards ceremony returned in person at the Palazzo Re Enzo. As is usual at this fair its other many award winners are named ahead of the fair itself so that rights directors can spot good work and set up meetings to learn more when they reach the trade show here in Bologna.

In the case of the publisher award, however, that one is announced during the course of the evening’s program, and here in Bologna that event was last evening.

Here, then, are the winners of what is, in fact, the 1oth iteration of this sought-after honor. They’re given in six geographical regions.

The descriptive text about each winner is provided by Bologna’s awards operation, thus we are quoting it and not asserting these comments to be our own.

For Africa, the winner is New Africa Books in from South Africa, consisting of two publishing brands.

“New Africa Books publishes a catalogue of titles covering all the South African languages, and is particularly focused on the cultural development of children and young people.

“New Africa Books is a small publishing house that operates with a philosophy at odds with the model that pervades much of the South African industry: its aim is to find gaps in the book market and fill them with beautiful and meaningful works.”

Lebanon’s Samir Éditeur wins for the Asian division of the award.

“Beirut-based Samir Éditeur publishes children’s books in Arabic and French and distributes them in the Arab countries and the rest of the world, namely in France.

For Europe, the prize goes to Liels un mazs from Latvia.

“Since its foundation in 2004, this publishing house has sought to develop and enrich the Latvian children’s book industry and create an alternative in the book world, both in terms of book content with high-quality texts and modern illustrations and innovative design and printing solutions, a testament to a refined literary and visual taste.”

“For North America, the 2022 winner is Canada’s Monsieur Ed. An independent publishing house specializing in children’s literature, Monsieur Ed has a predilection for stories set in special worlds, where reality and fantasy coincide. These universal stories inspire introspection and reflection.

“Although fiction is at the heart of its catalogue, Monsieur Ed also publishes nonfiction and graphic novels.”

For Central and South America, the winner is El Naranjo, from Mexico.

“Founded in 1994, this publishing house started publishing books for children and young people in 2003.

“El Naranjo has edited more than a hundred titles ranging from fiction, poetry, and art to history, nature, and classic literature, always seeking a playful approach.

“Its primary goal is to build its own aesthetic to contribute to the formation of critical and creative readers, through works that stimulate their sensitivity and interest, addressing themes with which they can identify or that provoke new reflections.”

For Oceania, the winner is Beatnik Publishing, from New Zealand.

“As an independent publisher, Beatnik has been enriching New Zealand’s publishing scene over the past 15 years with its keen eye for quality and beauty. Beatnik works closely with authors, poets, artists and local businesses to give life to books with a refined design and rich content.”

This is Publishing Perspectives’ 57th awards report published in the 57 days since our 2022 operations began on January 3.