A park in Seville on April 8 during the country’s coronavirus lockdown. Image – Vladispas

Those who heard publishing consultant Javier Celaya’s conversation this month (in Spanish) with digital publishing specialist Daniel Benchimol know that the publishing industry faces serious hurdles, even as it tries to start emerging from the coronavirus COVID-19 pandemic with the rest of the market.

At this writing, the Johns Hopkins Coronavirus Resource Center‘s 7:32 a.m. update (1132 GMT) assigns 232,128 confirmed cases to Spain, giving it the second-largest caseload in the world, after that of the United States (1,012,583 cases).

And the Bilbao-based Celaya—whose Dosdoce consultancy is a mainstay of information on the Spanish markets for the industry—made the point in that discussion with Benchimol that the Latin American and Spanish markets have operated for a decade with “a very serious structural problem, which has not been resolved and which is further aggravated by this new health and economic crisis.”

Celaya’s view is that between 2010 and 2020, the world’s Spanish-language publishing industry didn’t take adequate advantage of the chance “to transform their businesses into a 21st-century industry.” He calls the last 10 years a “lost decade” spent in stubborn resistance to the digital dynamic. “Most publishers and booksellers,” he tells Publishing Perspectives, “have given priority and full protection to the print format at all costs, minimizing the growth, and even putting all kinds of obstacles in the way of new digital formats including ebooks, audiobooks, and apps.”

Clearly, in the revenue-ruining experience of the pandemic—making impossible the kind of physical-bookstore shopping that still dominates sales in some European markets—a lag in digital development can be expected to have been a major drawback for many publishers.

The structural context for this, as Celaya puts it, lies in how “All business decisions made in the previous decade had a pivotal objective to defend a model of consumption in continuous decline—the unitary sale of the sacrosanct print book through physical bookstores—instead of promoting the sale of digital content through new consumer models such as D2C initiatives to sell print books through publishers’ own proprietary e-commerce platforms; allowing their catalogues to be available on emerging ebook and audiobook subscription platforms; and promoting digital borrowing in public and school libraries to attract new readers.”

Celaya is careful to note that in their discussion online, they took care to promote the message that all is not lost. “This new decade, from now to 2030, will give the industry a second chance,” he says.

“But I dare to predict that it will be the last chance for the publishing sector to prioritize the full transformation all its processes, however painful they might be” if it’s to be “competitive and sustainable in the 21st century.”

Of course, in such a scenario, it can seem that the pandemic couldn’t have arrived at a more challenging moment, the Spanish market in particular having suffered an extraordinary hit in the financial crisis before 2010. 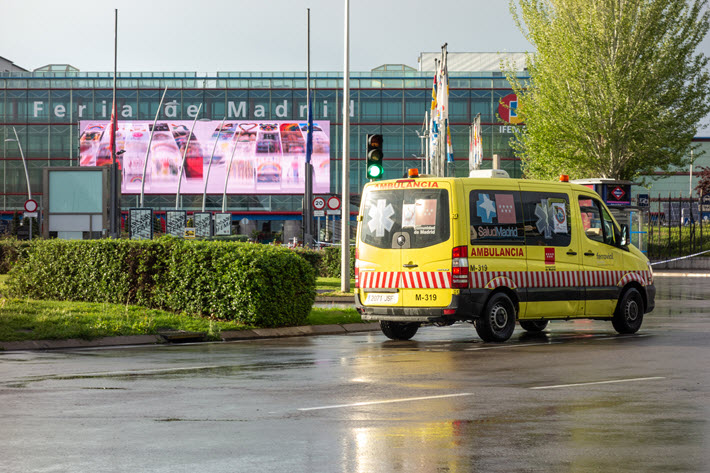 An ambulance arrives at Madrid’s IFEMA exhibition complex, which has been used as a field hospital for coronavirus treatment. Image – iStockphoto: Dudbran

But this is why it’s interesting that the Asociación Nacional de Editores de Libros y Material de Enseñanza (ANELE) is reporting something that looks almost like a breakthrough in Spain’s publishers’ embrace of their digital potential in the educational sector.

Relevant to our story today (April 29) on homeschooling—something many parents in international markets are trying to juggle with their own locked-down work scenarios—ANELE reports seeing a 250-percent increase in usage of its educational publishers’ digital offerings during the market’s long enforced #StayAtHome restrictions.

A total 1.5 million students and teachers have requested access licenses to use these tools to continue the work teachers normally would be undertaking in classrooms.

According to figures collected from its member companies, publishers have had to triple their support services to users, translating into increases in consumer-response staffers by 80 to 120 percent. “In addition,” according to today’s media messaging, “publishers have set up courses and online training activities targeted at teachers to train them in the use of digital tools available.”

Association leaders make the point that many provisions of free access have been provided for students and teacher trying to operate in digital environments to replace classroom work.

But there are hopes that some of what’s been learned—both by publishers and educators—may help sustain more growth in this direction, which of course can also be translated to consumer needs and interests in the trade sector, just as in education.

In a prepared comment,  José Moyano, ANELE president, says years of preparation and developmental investment in online capability has preceded the success “in a new educational environment where we no longer speak of textbooks but curricular educational content.

“A part of that content is collected in books, but another complementary part is in the different tech platforms available to students and teachers.

“Thanks to this technological advance preparation, publishers have been able to respond, almost overnight, to the needs and service this peak demand caused by the new scenario” of the coronavirus pandemic.

However, there may be a caution for the outlook in the educational sector, based on what Celaya reports from the trade side. This involves what so many educational systems and content producers did early in the contagion’s onslaught in many countries, not just the Spanish-language markets: they handed their work over free of charge as a goodwill gesture.

“Many publishers overreacted during the first two weeks of confinement,” Celaya says, “giving away too many ebooks and audiobooks. But it was understandable, as an act of generosity in the midst of unprecedented social chaos. No publisher had a manual on how to manage this type of crisis, so criticizing past actions is too easy.

“Fortunately, in the subsequent weeks of the confinement we’ve seen how publishers have drastically reduced free ebook campaigns in favor of promoting ebooks and audiobooks with discounts, along with organizing virtual meetings with authors, granting more e-lending licenses to public libraries, and so on.”

And in this context, educational digital publishes and systems may find that carefully re-monetizing what had initially been an altruistic gift will be of help in restabilizing.

More from Publishing Perspectives on Spain’s market is here, and more education is here. More from us on the coronavirus pandemic is here.