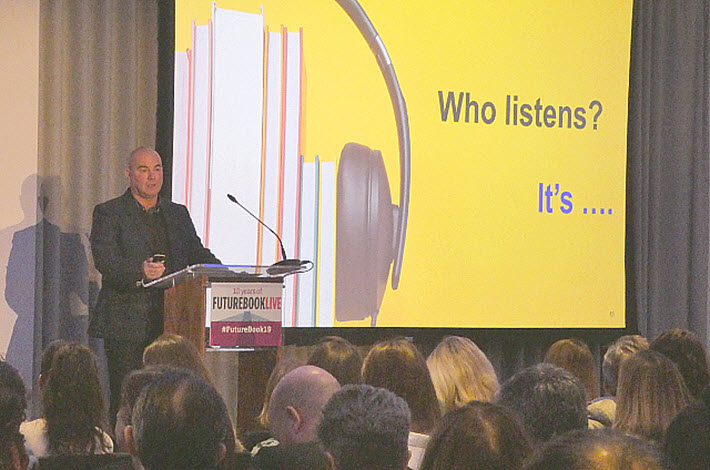 As has been the case in the past several years at The Bookseller’s  FutureBook Live conference in London, Monday’s (November 25) edition had multiple sessions about audio. Not least because of the downloadable audiobook sector’s regular revenue jumps, the topic remains one that many in publishing want to talk about.

Lee Langford of Harris Interactive had some strong points to make from the company’s research.

Based on Harris’ examination, an estimated 77 percent of the UK population, Langford said, reads or listens to books. And the average level of consumption is 12 books in the last year.

The Harris data maintains that 15 percent of those surveyed said they’d listened to an audiobook in the last year, and of those, six percent used a physical CD rather than streaming or downloading sources.

Audiobook listeners in the UK continue to skew male and younger and to be high earners who have homes with kids.

More younger men than women also said they were likelier to increase their listening in the future.

And in a clarifying note amid so much euphoria around audiobook news, Langford also pointed out that audiobooks accounted for only 8 percent of the study’s total reading and listening time in the last year.

Orion managing director Katie Espiner talked with The FutureBook’s Molly Flatt during Monday’s conference, saying that publishers should open more offices outside London, and that salaries should be stated on job advertisements across the industry. 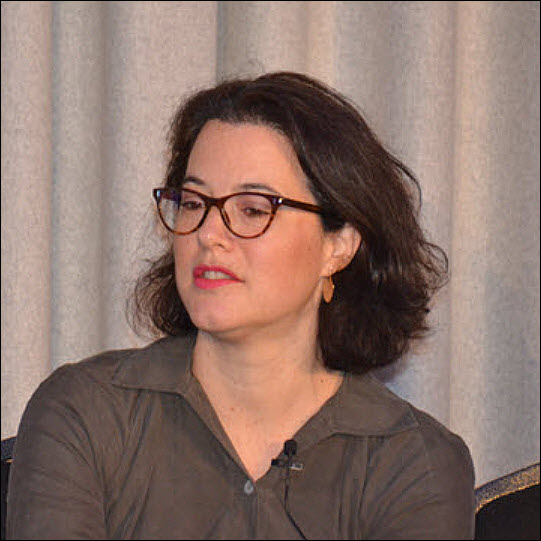 “These are just small things,” Espiner said in her onstage conversation, “but I think they’d make a difference.

“I think this would go some way to improving diversity in the industry.

“I’d also like to see salaries on all job advertisements—for publishing roles, agenting, bookselling. There’s a lack of transparency at the moment, and some roles are paid very well. We need to make more noise about what an exciting industry this is.”

When it comes to publishers she admires, Espiner mentioned children’s publisher Knights Of , which simply “saw something needed to change and then did something about it.” But on the whole, she said, she feels publishing is “quite bad at innovating.”

The Bookseller’s editor Philip Jones asked how important female leadership is in the industry, and Espiner replied with a clarion call for those women in the business who are unsung or who are doing fabulous work beneath CEO level.

“I think we’re too obsessed with CEOs,” she said, “and it denigrates the work that so many women in the business do. There are so many women doing fabulous work: Louise Moore [at Michael Joseph], Susan Sandon [at Cornerstone], Hilary Murray-Hill [at Hachette Children’s].

“These are leaders  responsible for huge businesses. If we only focus on who’s at the top, it puts people off. We need to shine a light on women doing fabulous work at every level of the business.”

She began the session by talking about the challenges she faced when she joined Orion as managing director after many years at HarperCollins where she had a more editorial role running Borough Press.

Among the changes she introduced was more autonomy for the various imprints, with a publisher for each with profit and loss responsibility and a mandate to set their own strategy.

But she didn’t shy away from acknowledging the difficult moments. “It’s very hard to accept that some people don’t like what you are trying to achieve,” Katie Espiner said.

“But your leadership style is singular and personal to you, and you can’t please everyone.”

More from Publishing Perspectives on The FutureBook and its conference is here. More on the UK market is here. And more on audiobooks is here.