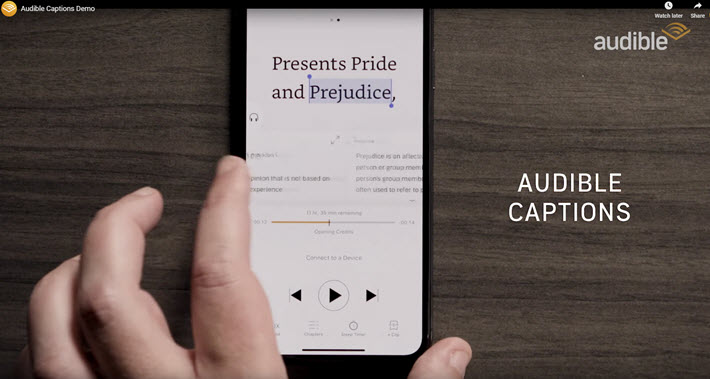 More than 100 pages of court filings precede a hearing expected this week in the US publishers’ lawsuit of Amazon’s Audible. Publishers allege copyright infringement, the audiobook company asserts fair use. 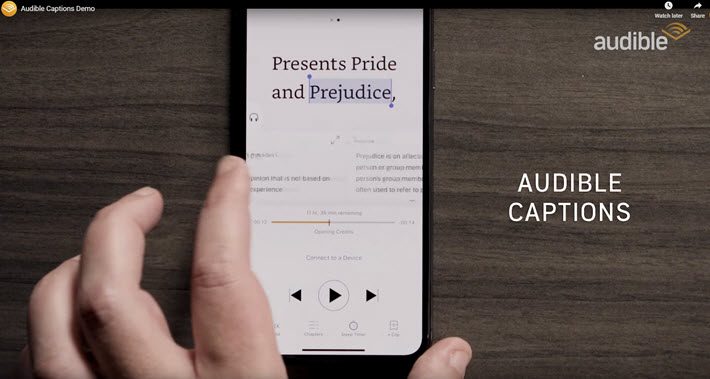 In this image from Audible’s July 23 online demonstration of its Audible Captions feature, the company’s chief product officer Richard Stern shows how highlighting a word of distributed text can produce either a dictionary or Wikipedia reference. Image: Audible.com

For all the upbeat noise around audiobooks and the publishing industry, the sounds coming from the legal battle between Amazon’s Audible and the Association of American Publishers (AAP) have been anything but cheery.

Two things have occurred this month in the case, with a hearing anticipated Wednesday (September 25).

“No more than 15 words appear on the screen before it is wiped clean and a new caption begins to appear. Listeners have no access to this text other than for the moment it flashes on the screen. “Audible's motion to dismiss

Taken together, some 106 pages have been filed with the court in compliance with the orders of Judge Valerie Caproni in the Southern District of New York.

Audible Captions transcribe and display the text of narrated performances as an audiobook’s sound plays, much as you might see subtitles on a film, but with the text being machine-generated in real time. This is called a “distributed text.” While in this article we’ll outline the high points of the arguments, we now can see more clearly why many observers understand this to be a potentially pivotal test of copyright law in a digital age, as various formats and channels of content transmission lie so near each other.

What’s essential to proponents of the publishing community’s arguments is the charge that Audible’s voice-generated Captions form a rendition of a book that’s neither licensed nor paid for by Audible.

By contrast, Audible’s over-arching answer is that the Captions are an allowable and useful evocation of a book and that no copyright infringement is involved in their creation.

“Publishers and their authors hold valid copyrights. The right to resell audiobooks is distinct from the right to reproduce and distribute text.”Publishers' AAP court filing

But the greater message, and for both sides, may be that many such instances—in which one digitally enabled dynamic leads to another—will present new challenges to us in coming months and years, triggering fights over such hybrid content developments, intellectual property ownership, copyright and licensing, content delivery, and impact on rights holders and consumers.

It’s impossible to think that we won’t see “nearby formats” leveraging content, or trying to, and this means that the case could be a defining one.

As the States’ premiere publishers’ association and richest publishing houses take on the world’s largest commercial audiobook purveyor—owned by the dominant market force in book retail—this is a test of how robust and determined each party’s stance really is.

As Publishing Perspectives readers will recall, the “Audible Captions” feature was announced in mid-July as what Audible has said is an educational and accessibility boost for audiobooks. And that’s the first point made under a heading, “Factual Background,” as written by the company’s attorneys in their 44-page filing in opposition to the AAP lawsuit’s motion for an injunction.

In its preliminary statement, the Audible filing seeks to dispel assertions from the publishers’ side that the Captions program creates a textual edition, a copy, of a book:

“Audible Captions is an innovative audiobook feature that works just as its name implies: while a customer listens to an audiobook, snippets of text, similar to closed captioning or subtitles, briefly appear on the screen, word-by-word, in sync with the narration. If the listener taps a word, she can (a) see its dictionary definition, (b) read its related Wikipedia entry, or (c) translate it into another language.

“Otherwise, the words disappear as the audio progresses: on average, no more than 15 words appear on the screen before it is wiped clean and a new caption begins to appear. Listeners have no access to this text other than for the moment it flashes on the screen. They can choose to enable Audible Captions on their audiobooks—for which they already have paid—and can disable the feature at any time. The text is generated by off-the-shelf, freely available speech-to-text technology.”

And then, in Audible’s legal strategy, the company’s attorneys assert, “As copyright licensors, [the] plaintiffs cannot sue for infringement for licensed content.” They also maintain that Audible Captions are a “fair use” of the content.

It’s helpful at this point to turn to Devlin Hartline, assistant director of the Center for the Protection of Intellectual Property and an assistant professor at George Mason University’s Antonin Scalia Law School. In a helpful analysis of the case, Hartline writes of Audible creating “irrelevant distractions” in its mid-month filing.

Hartline raises a question about where the Audible stance places accountability for the appearance of Captions: 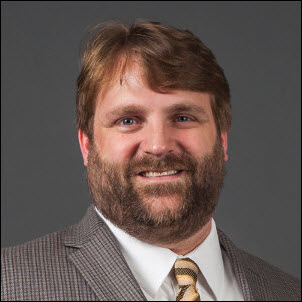 “Audible argues that this should be a contract dispute, not a copyright case, and that Captions is nevertheless fair use—no matter who is doing the copying. Indeed, the one thing that Audible apparently wants to avoid discussing in detail is the one thing that I find interesting in this case, namely, who directly causes the various prima facie infringements of the publishers’ rights to occur. …

“Audible explicitly states that ‘a listener generates Audible Captions.’ So that tells us who Audible thinks is doing the copying—and it’s not Audible. …

“After throwing its users under the bus by claiming that they make the copies with Captions, Audible sidesteps any actual analysis of that issue by arguing instead that the publishers failed to properly plead their copyright claims. The crux of Audible’s argument is that, since it has license agreements with the publishers to sell and produce audiobooks, the publishers have waived their right to sue for copyright infringement to the extent Audible’s conduct is licensed.”

Ultimately, write Audible’s attorneys, “Issuing an injunction would harm Audible and its customers, and would be contrary to the public interest. The purpose of Audible Captions is to foster learning by enabling paying license holders to engage more meaningfully with the audio content they have purchased.

“Audible Captions will also support learners with disabilities, who are hard of hearing, for whom English is not their first language, and who are disinclined to read.”

AAP’s Position: A Copyright Dispute, Not Fair Use, Quality

In this illustration from her court filing, Scholastic’s Lois Bridges highlights an inaccurate rendition of a passage from ‘Pride and Prejudice.’ Image: ‘Reply Declaration of Lois Bridges,’ US District Court Southern District of New York

The seven publishers represented by the AAP’s court action—as might be expected—reject any idea of the issue being a contract dispute rather than an issue in copyright.

There actually are three parts to the filing(s) made on Friday: a memo in support of the driving motion for a preliminary injunction to stop the rollout of Audible Captions; a memo in opposition to Audible’s motion to have the case dismissed; and a “reply declaration” in which Lois Bridges, vice-president and literacy publisher of Scholastic Professional, lays out an extensive case for serious concerns about how Audible Captions may transgress the quality requirements with which publishers’ and authors’ content is originally licensed to Audible.

The publishers list a compelling roster of points of their own in the opening of the document (with legal references edited out here for readability). Remember that “distributed text” refers to the text of Audible Captions, which is generated by the voice of an audiobook’s narrator. Attorneys for the publishers write:

Particularly interesting is that last point, called the “balance of hardships” issue.

The publishers’ attorneys argue, “The balance of hardships does not favor Audible. Audible does not event attempt to argue that it would suffer economic hardship if unable to release distributed text for publishers’ work.”

In the question of fair use, the publishers reject Audible’s reliance on Authors Guild v. Google, pointing out that the distributed text of Audible Captions generates a version of a complete book, as read by a narrator. “The Second Circuit held that Google Books was fair use only because it found that it did not distribute the entirety of the books,” write the attorneys for the publishers.

“Rather, it allowed users to find authorized copies in a carefully controlled environment where the entire book was systematically withheld from distribution. Google showed only ‘enough context surrounding the searched term to help’ evaluate whether the book was responsive to a search.”

And to the quality control point, Scholastic Professional’s Bridges writes in her declaration: 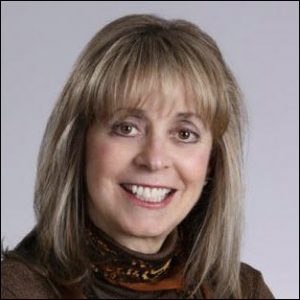 “Literacy professionals seek to present readers with approachable, authentic and well-designed text—what they call ‘considerate text.'” By contrast, she writes, “inconsiderate text” is when it is syntactically disorganized or garbled, poorly structured, or hard to understand. … Inconsiderate text does not provide the context that readers need to generate connections, and ultimately meaning.

“The more inconsiderate the text, the harder the reader has to work to understand it. Thus, best practices have developed to ensure that readers are able to fully engage with the text. …

In this article, we’ve used two of the illustrations from Bridges’ presentation, images from Audible’s Captions demonstrations that reveal instances of “inconsiderate text.” One of the things she discusses, for example, is well-known to television news anchors who read from a TelePrompTer–the fact that, as she puts it, “Many times, it will be impossible to even see the entirety of a single sentence. Each word is sealed off from every other, impeding the ability of a reader to generate connections.

“Thus, for those struggling students, the format is actually detrimental to their comprehension and does not help improve engagement with a literary work.” 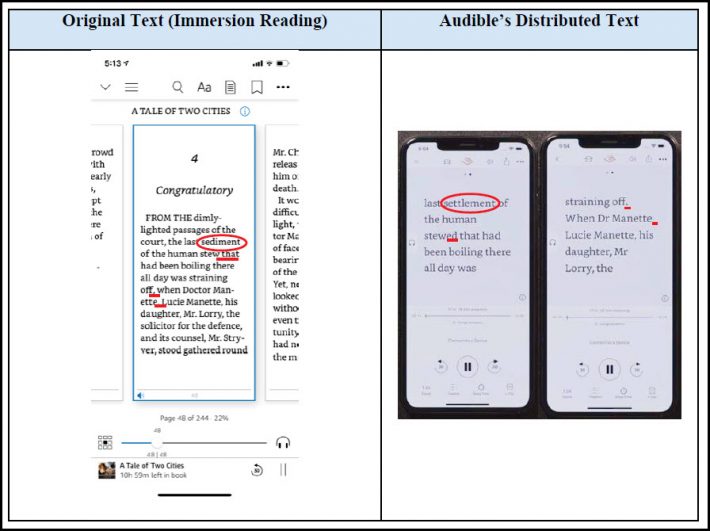 In this illustration from her court filing, Scholastic’s Lois Bridges highlights an inaccurate rendition of a passage from ‘A Tale of Two Cities’ in which the Immersion Reading program’s use of the word ‘sediment’ is correct and the word is interpreted as ‘settlement’ in an Audible Captions demonstration. Image: ‘Reply Declaration of Lois Bridges,’ US District Court Southern District of New York

Latest confirmations from the Association of American Publishers indicate that the Wednesday (September 25) hearing date is correct.