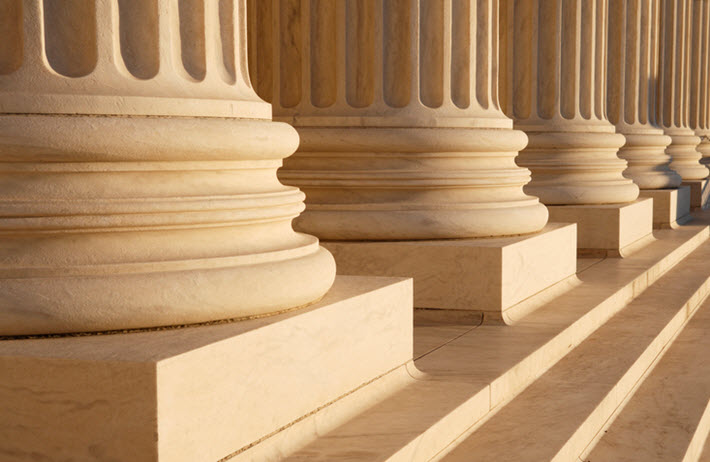 Focusing on what it describes as Trump’s assaults on the news media and violations of the First Amendment, PEN America has filed a lawsuit against Donald Trump.

‘Threats To Punish the Media’

With its almost poetic timing to current events, PEN America’s lawsuit of Donald Trump seeks a court order “enjoining defendant Trump from directing any officer, employee, agency, or other agent or instrumentality of the United States government to take any action against any person or entity in retaliation for speech that the president or his administration do not like.”

As the world watches the slow, tragic evasions and revelations played out following the apparent assassination of the Saudi journalist for The Washington Post Jamal Khashoggi, the papers filed by PEN in the US District Court of the Southern District of New York assert that, “President Trump has directed his threats and retaliatory actions at specific outlets whose content and viewpoints he views as hostile.”

As an aside, it’s worth noting that in December 2015, this year’s PEN Pinter Prize winner, Chimamanda Ngozi Adichie—who was honored in London after her appearance at Frankfurter Buchmesse on October 9—joined with some 70 prominent members of PEN in calling on then-President Barack Obama to press Saudi Arabia for the draconian sentences and punishments of poet Ashraf Fayadh and Web publisher Raif Badawi, the 2016 recipient of the International Publishers Association’s Prix Voltaire.

In the new lawsuit, PEN’s focus brings to bear the objections of the literary community to how Trump is threatening primarily the freedom to publish held by the news media.

“President Trump has First Amendment rights and is free to criticize the press vehemently,” we read in the court papers, “but he is not free to use the power and authority of the United States government to punish and stifle it.”

“Given our mission to defend free expression and support those who pay a price for its exercise, we are determined to rise in defense of the press freedom protections that are so fundamental to our society and democracy.”PEN America

The text of the complaint reads, in part, “Defendant Trump has made eminently clear his disdain for the press and the legal protections the First Amendment affords it. He has frequently referred to journalists covering his rallies as ‘disgusting’ and has stated, more generally, that it is ‘frankly disgusting the way the press is able to write whatever they want to write’ and that ‘people should look into that.’ Defendant Trump has decried reporting [that is] critical of him or his administration as ‘fake news’ and has repeatedly labeled journalists ‘the enemy of the American people,’ an epithet used by Joseph Stalin and other authoritarian and repressive rulers to denigrate and endanger their critics.”

In presenting its complaint, PEN is represented by the nonpartisan nonprofit Protect Democracy and the Yale Law School Media Freedom and Information Access Clinic.

Four points of contention are broken out in PEN’s messaging about the lawsuit, cast by the organization’s leadership as unconstitutional actions on the part of Donald Trump:

In its discussion announcing the suit, PEN’s staff concedes, “Most of the president’s verbal attacks on the press are speech that is protected under the First Amendment. Our country’s broad protections for free speech allow the president to denigrate the press and even go after individual journalists by name.

“However, when President Trump crosses the line and threatens to use his authority to punish the media, or actually does so, it is vital for the courts to step in and affirm that such threats and reprisals are unconstitutional.”

The complaint, which runs to 26 pages, includes sections in which PEN points out that targets of Trump’s hostility include the organization’s members, writing, “Members of plaintiff PEN America work for, or with, the Washington Post, Time Warner, CNN, NBC, the White House press corps, and other entities against whom defendant Trump has used, or threatened to use, the machinery of government to retaliate for or suppress their critical speech. Plaintiff’s members are directly harmed by defendant Trump’s actions even if they or their employers have not specifically been threatened with retaliatory action.”

And the filing also looks at one of the most prevalent and subtle effects of free-speech suppression, self-censorship, writing, “Even if some news organizations and reporters directly threatened by defendant Trump continue to cover him and his administration exactly as they always have, the defendant’s actions cast a chill and create a reasonable risk that some will not.”

In writing about the suit, the Associated Press’ Hillel Italie points out, “The organization seeks no money beyond ‘costs, including attorneys’ fees,’ and other ‘relief as the Court deems just and proper.’

As Italie writes, this is not the first time Trump has been sued while president and on First Amendment grounds, either, and with varied results.

“Last month,” Italie writes, “a federal court in Cincinnati ruled that protesters at a Trump rally in March 2016 in Louisville, Kentucky, could not sue him for inciting violence, finding nothing incriminating in his remarks.

“Earlier this year, the Knight First Amendment Institute sued Trump and his communications team for blocking several people from the president’s Twitter account. A judge in the US District Court for the Southern District of New York, where PEN’s suit was filed [October 16], ruled in May that blocking Twitter critics violated the First Amendment.”

And in a joint statement to the PEN membership and the public from the organization’s current president, Jennifer Egan, and CEO, Suzanne Nossel, we read, “As an organization of writers, we at PEN America are deeply concerned to see the antagonism toward the press that we’ve long associated with authoritarian rulers around the world manifest here at home.

“We have forcefully raised concerns about free expression infringements during the Obama, Bush, and other prior administrations including, in some instances, by filing suit. Given our mission to defend free expression and support those who pay a price for its exercise, we are determined to rise in defense of the press freedom protections that are so fundamental to our society and democracy.

“With media organizations focused on their essential role of providing probing, objective coverage, PEN America is uniquely positioned in standing up to these encroachments on the work of those who cover and comment on the work of our government.”

The text of the court filing is available in here, in PDF.

More from Publishing Perspectives on PEN America is here, and on Donald Trump is here.