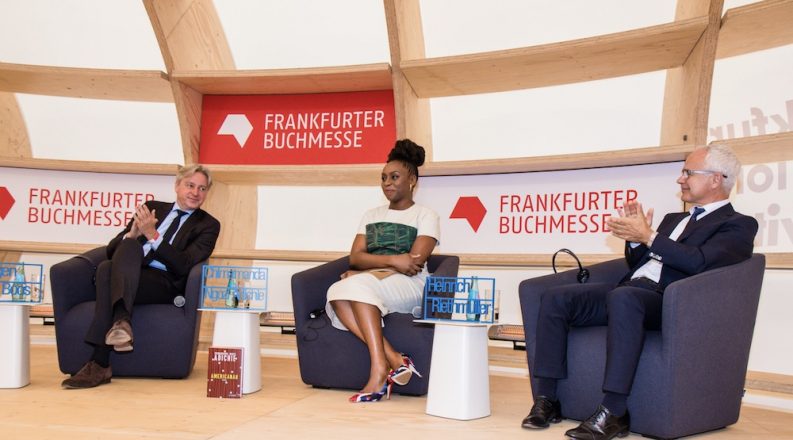 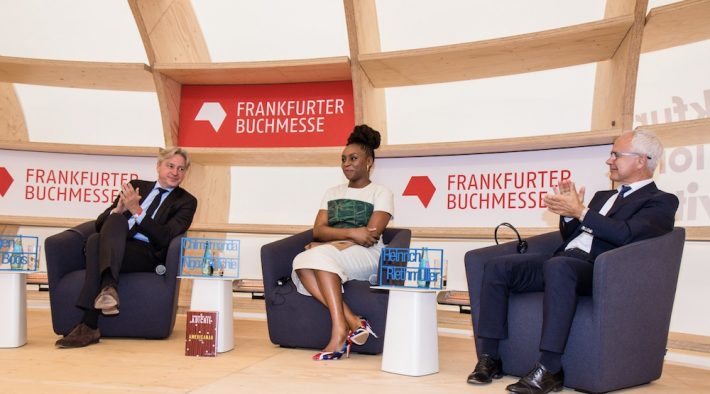 The Nigerian novelist Chimamanda Ngozi Adichie was given a rock star’s welcome at the fair’s opening press conference yesterday—entirely appropriate for a writer whose work has been sampled by Beyoncé—with extended applause and cheers and an almost palpable outpouring of affection.

She did not disappoint, and in a wide-ranging speech that touched on women’s rights and the importance of writing, she said that the world was “shifting and darkening . . . the most powerful country in the world feels like a feudal court, full of intrigue, of mendacity, drowning in its own hubris.” As everyone hoped she would, she made direct reference to the appointment of Brett Kavanaugh to the US Supreme Court, despite allegations of sexual misconduct made by two women.

She led up to it with comments on the lack of visibility for women’s voice. “The stories of women are not truly familiar, the stories of women are not yet seen as universal,” she said. “This to me is why we seem to live in a world where many people believe that large numbers of women simply wake up one day and make up stories about having been assaulted. I know many women who want to be famous; I don’t know one single woman who wants to be famous for having been assaulted. To believe this is to think very lowly of women. The Supreme Court Justice Ruth Bader Ginsburg has spoken of how she was once asked, ‘How many justices of the Supreme Court need to be women for it to seem fair to you?’ and her response was ‘All nine of them.’ And she said people were often shocked and would say ‘Oh but that’s not fair,’ and of course for many years all nine justices were men and it seemed normal, just as it seems normal to me that most of the positions of real power in the world are occupied by men. Women are still invisible.”

She talked about being asked to cover her arms when she revisited her childhood church in her native Nigeria and said that “this need to control women’s bodies exists everywhere—from the woman in the Middle East being told to cover up when she doesn’t want to, to the woman in Asia who is secretly videotaped in a public bathroom to women in the west being ‘slut-shamed’ because they are sexual beings. It exists in the world of literature too, where women writers are expected to make their female characters likeable as though the full humanity of a female person must in the end meet the careful limitations of likability.”

Earlier Heinrich Riethmüller, head of the German Publishers and Booksellers Association, spoke of the fair’s On the Same Page campaign, which celebrates the 70th anniversary of the UN Declaration of Human Rights, and how bookshops and publishers “have a responsibility to society based on the importance of human rights and telling many different stories.” He noted that, at the sharp end, figures for the German book market were pretty good, just down 1.1 percent for September 2018 over last year. “And we are optimistic for a good autumn and Christmas.”

Read more from Frankfurt in our Wednesday Show Daily.