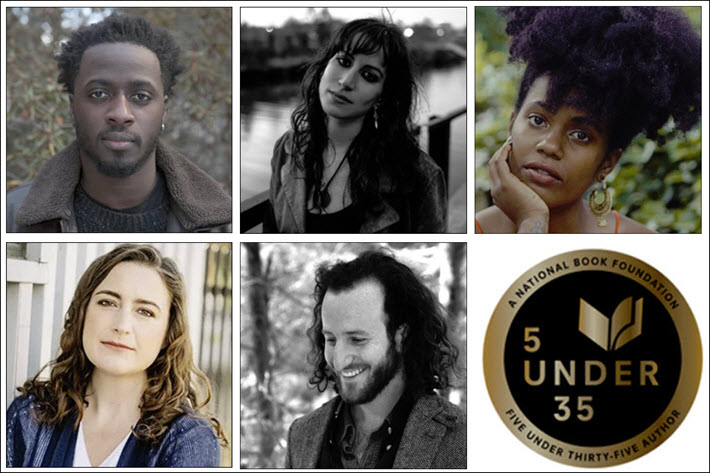 The National Book Foundation cycle of award announcements includes this year’s group of ‘5 Under 35’ emerging literary talents, ‘whose debut titles provide a first look at their exceptional talent as fiction writers,’ according to David Steinberger. 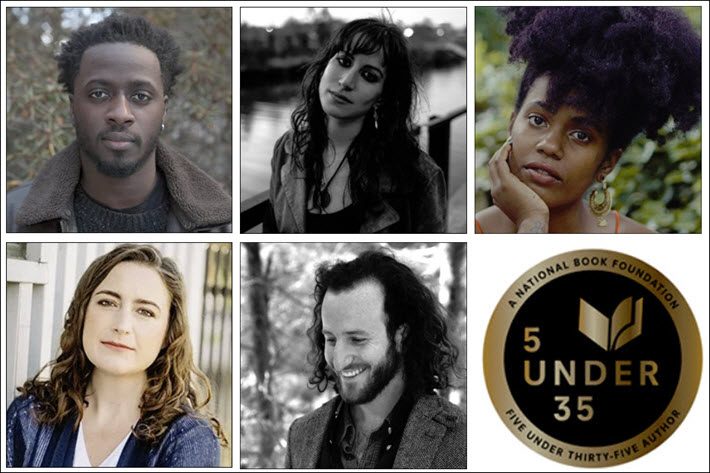 ‘Watching and Supporting Them’

In announcing its 2018 roster of “5 Under 35” writers, the National Book Foundation is again honoring a group of authors seen has having particular promise for the future.

This year’s selections feature four novels and one story collection.

The authors selected are chosen by previous National Book Award winners, finalists, and longlisted authors, or writers previously recognized by the 5 Under 35 program. The chosen authors do not have to be American. They do have to younger than 35. And they must have published their first and only book of fiction—either a short story collection or a novel—within the last five years.

The 2018 authors will be honored at an invitation-only ceremony on November 12. The program is sponsored by the Amazon Literary Partnership, and each honoree will receive a US$1,000 prize.

Translations and books originally published outside the States are eligible, but they must have a US publisher and be available in English.

In a prepared statement, foundation board chairman David Steinberger is quoted, saying, “Each year, we take great pleasure in honoring five authors whose debut titles provide a first look at their exceptional talent as fiction writers.

“It’s with pride that we welcome these authors into the National Book Foundation family, watching and supporting them as they continue to publish in their careers, reaching even wider audiences and garnering additional acclaim.”

And Lisa Lucas, the foundation’s executive director, is quoted, saying, “While we consider all of our programs at the National Book Foundation vital and unique, 5 Under 35 occupies a very special place in our programming.

“It’s such a joy to be able to recognize debut works that showcase outstanding craft and storytelling, and also share original, exciting perspectives, heralding new voices that are certain to impact the literary world.”

In media messaging, the foundation says the five authors chosen for this year’s recognition “have been shortlisted for the PEN/Robert W. Bingham Prize for Debut Fiction and the Center for Fiction First Novel Prize, won the Commonwealth Short Story Prize, had titles named Amazon Best Books of the Month, and appeared on numerous lists of best and most anticipated books.”

This year’s 5 Under 35 selectors are

Their decisions are made independently of the National Book Foundation staff and board of directors. Deliberations are strictly confidential.

Here is brief biographical information provided by the National Book Foundation on the five honorees.

Nana Kwame Adjei-Brenyah has an MFA from Syracuse University. His work has appeared or is forthcoming in numerous publications, including Guernica, Printer’s Row, and Breakwater Review, where ZZ Packer awarded him the Breakwater Review Fiction Prize. Friday Black is his first book.

Hannah Lillith Assadi received her MFA in fiction from the Columbia University School of the Arts. She was raised in Arizona by her Jewish mother and Palestinian father. She lives in Brooklyn. Sonora is her first novel.

Akwaeke Emezi is an Igbo and Tamil writer and artist based in liminal spaces. Born and raised in Nigeria, Emezi received an MPA from New York University and was awarded a 2015 Miles Morland Writing Scholarship. Emezi won the 2017 Commonwealth Short Story Prize for Africa, and their work has been published in various literary magazines, including Granta. Freshwater is their debut novel.

Lydia Kiesling is the editor of The Millions. Her debut novel, The Golden State, was longlisted for the Center for Fiction’s First Novel Prize. Her essays and criticism have appeared in The New York Times Magazine, The Guardian, Slate, and The New Yorker online, and have been recognized in The Best American Essays 2016. Kiesling lives in San Francisco with her family.

Moriel Rothman-Zecher is an American-Israeli writer, poet, and novelist. Born in Jerusalem, he graduated from Middlebury College with a degree in Arabic and political science. A recipient of a 2017 MacDowell Colony Fellowship for Literature, his work has been published in The New York Times, Haaretz, The Paris Review‘s Daily, The Common, Electric Literature, and elsewhere. His first novel, Sadness Is a White Bird, was published in 2018, and was long-listed for the Center for Fiction First Novel Prize. Moriel lives in Yellow Springs, Ohio with his wife, Kayla, their daughter, Nahar, and their dog, Silly Department.