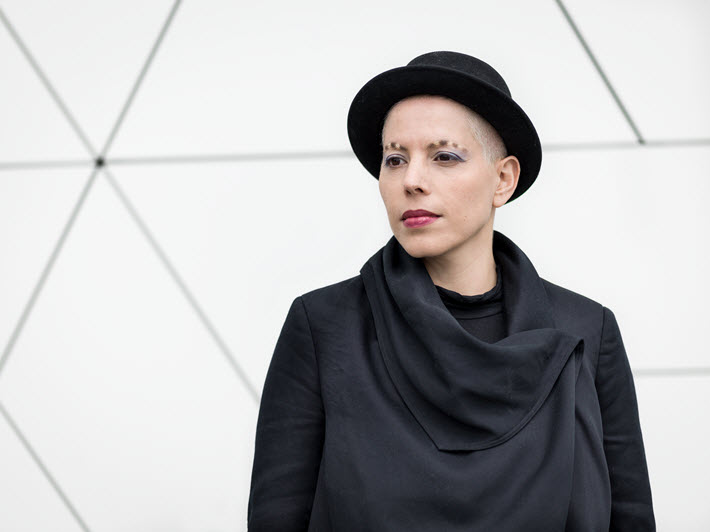 ‘Publishers have the responsibility and opportunity to use technology to extend their reach as well as to explore new media,’ says Galit Ariel ahead of her appearance at the Frankfurter Buchmesse. 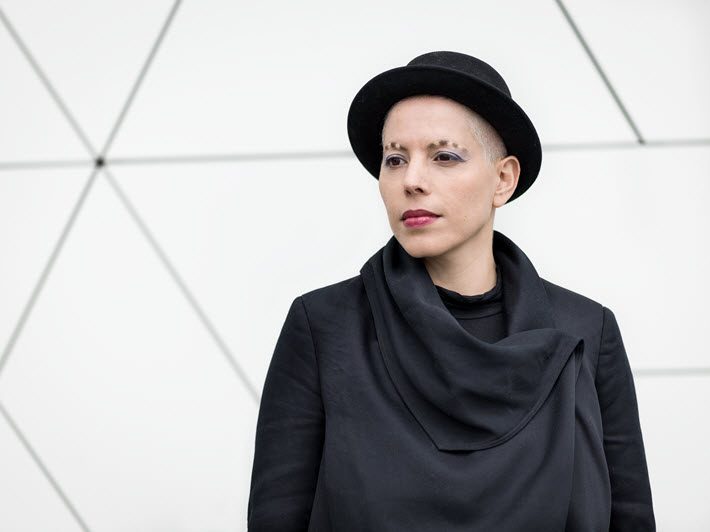 ‘To Reconnect With Spaces and People’

When you enter Galit Ariel’s WondARlands site’s “philosophy” page, one of the first things you notice is a slightly glitchy message: Make Reality Great Again.

A self-described “digital hippie,” Ariel takes in her work seriously and her book—Augmenting Alice: The Future of Identity, Experience and Reality (BIS Publishers, 2017)—has been especially well received in the design world, in which she did her own training, in London and Savannah.

One of her favorite messages can be found early in her book: “You should never underestimate nerds and their science fiction, as they play a pivotal role in stimulating technology and creativity.”

And Ariel will be making two appearances onstage at the Frankfurter Buchmesse next month.

We opened our exchange with the Israeli-born Ariel as she was aerial—traveling from Canada to Europe—and we were interested in how much of her approach has to do with her training and experience in design and design thinking. 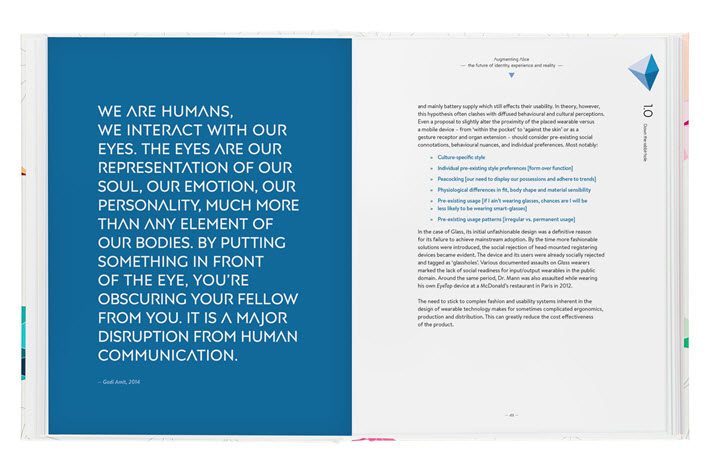 From ‘Augmenting Alice: The Future of Identity, Experience, and Reality’ by Galit Ariel (BIS Publishing)

Publishing Perspectives: Does your training and experience in design help lead you now to your advocacy of the importance of AR? 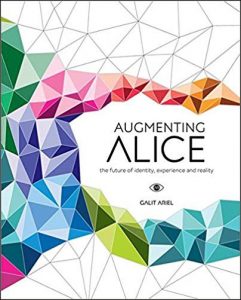 Galit Ariel: Coming from a multidisciplinary background of physical product design, combined with brand and strategy practices, design thinking and user experience are a massive strength—and in my mind a necessity—when approaching immersive technologies and augmented reality in particular.

PP: In your work, you’ve looked not only at how AR in the right hands could create valuable things but also a lot of challenges.

GA: Technology, digital interaction, and media have already shaped our society in many ways. They’re intertwined and can’t be separated from our everyday life. It affects all facets of our lives—on an economic, social, cultural, and political level—the way we navigate within the world, acquire knowledge, trade, commute, vote, communicate, express ourselves. These are all, directly and indirectly, influenced by technology. In many parts of the world, it’s no longer a commodity or an industry, but a common.

As a result, any emerging tech impacts this eco-system of modern living. I do believe that immersive tech would carry a much more distinct effect and impact.

The differentiation point of augmented reality is that it builds on a platform we’re already immersed in—reality. Its ability to blend and impact behaviors and perceptions within the physical space will shape public, private, and intimate narratives. This is a very potent tool. And we need to consider what that means.

I’d love to think that we’d use such technology to indeed “augment” reality—to help us reconnect with spaces and people in a positive and inclusive manner. Discover the beauty of complexity and the human experience… Re-establish eye contact and physical interaction. I think augmented reality will help “Make Reality Great Again,” [meaning] help us discover and amplify the richness around us rather than overriding it. 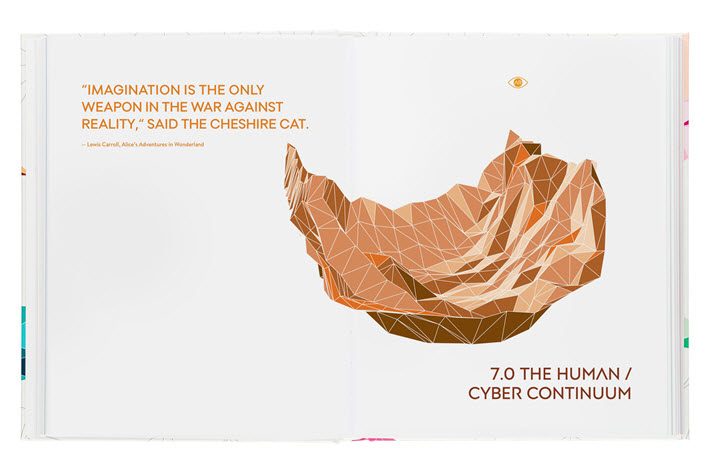 From ‘Augmenting Alice: The Future of Identity, Experience, and Reality’ by Galit Ariel (BIS Publishing)

PP: So far, much of AR experimentation in books has been in illustrated children’s books in which graphics can be rendered in 3D effects and so on—much as the old ViewMaster device did decades ago for kids as a glorified stereoscope. This seems a limited concept of the potential for AR and publishing. Could you give us some ideas of what you envision being ahead for receptive publishers who are willing to examine what AR can do for their content?

“I believe that publishers have a great opportunity today to rethink and explore the best of physical and digital content.”Galit Ariel

GA: I understand the current concern. Digital publishing is easier to generate, distribute, carry, store, update. But I believe there’s a lot of room, especially now, to explore a hybrid type of publishing as a new medium. I believe that publishers have a great opportunity today to rethink and explore the best of physical and digital content.

Marrying the digital and physical is the best way to make the best of both worlds. There will be no need to choose between physical and digital/interactive. Transforming books, magazines, and other physical vehicles—since anything could become a narrative vehicle—into truly “rich media.”

In Augmenting Alice, we played with two types of interactive media, one that was more entertaining while the other more informative , allowing us to update all the graphs and information-based illustrations, and making the book into a “living” platform. The sky is really the limit in creating new interactions embedded within traditional mediums. Adding interactive snippets that are woven or referenced in, and back to, the narrative; adding soundscapes and visual effects; engaging individuals and groups around it.

The publishing industry can move into a more inclusive and participatory manifestation of content, which will allow the user to explore new layers and depths, bring back a sense of wonder and discovery. 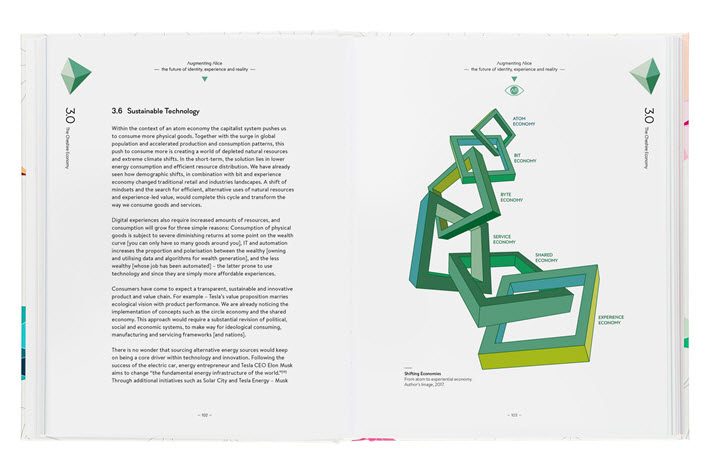 PP: In past onstage appearances, you’ve said that AR technology “will change the way we interact with the world, but the change can be positive or negative.” And AR’s challenges are fewer, as you pointed out, than VR’s problems and it’s a much more social platform. If, as you point out, “augment” means to make something greater by adding to it, then we’re talking about value. So where and how should publishers be brainstorming about how to innovate with AR? What part of the value of their output can be most directly augmented?

“Publishers should develop clear strategies around augmented and immersive technology, as opposed to applying it because it’s ‘hot.'”Galit Ariel

GA: Both have their own virtues, but augmented reality is more likely to be widely diffused. Unlike virtual reality, augmented reality allows people to process the physical and digital simultaneously, eliminating the need to bridge the two mentally. It offers fewer technical challenges and lower costs, and it carries better opportunities for social interaction.

But there are still things we need to learn about and explore, such as best practices of interaction within the hybrid space. And how would people would develop and evolve the way they interact with the technology and the environment?

Publishers should develop clear strategies around augmented and immersive technology, as opposed to applying it because it’s “hot.” And publishers need to ask themselves what real value could an augmentation layer bring to what they already have.

To build on something that truly amplifies it means starting with three simple questions:

Stop yourself from overdoing it merely because everyone else does. Instead, begin to truly explore it, if you want to make a deep transformation within the industry. 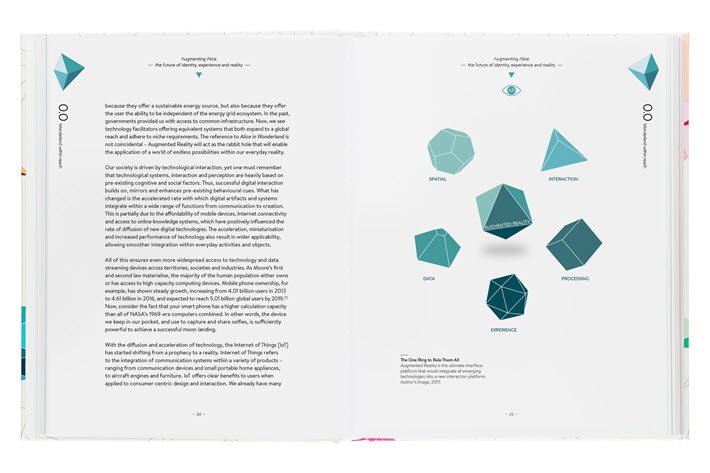 PP: One of the key things that we’re talking about at Frankfurt this year is the question of copyright. In the same way that there isn’t a copyright on someone’s appearance, how carefully will publishers need to think about what happens in copyright considerations when they augment the value of their work with AR? If as you say, publishers still have the chance to choose what they can make of such powerful technologies as AR, where are the points of clarity they need to look for in terms of intellectual property and its protection?

“Since we’re talking about the opportunity to create layered and rich media experiences, that means a lot more considerations regarding copyright issues.”Galit Ariel

GA: Since we’re talking about the opportunity to create layered and rich media experiences, that means a lot more considerations regarding copyright issues. I’m a big believer in having clear copyright regulation, but also recognizing new realities of content creation and usage.

The first step is to talk about it openly and anticipate as much as possible, as an industry. What might it mean regarding implications and strategy? We can’t predict everything, but getting prepared is essential.

In the long haul, publishers and content creators alike will need to have a deeper understanding and broader expertise regarding creating, developing, and distributing content.

PP: Lastly, however, is there a chance that AR could be construed as more distracting that substantive, however?

GA: Beyond the inherited responsibility and desire to create valuable content, the reality is that you need to create genuine value to reach existing and new markets.

Yes, there are a lot of distractions around, but I believe that consumers ultimately yearn for meaningful content. Competing for consumers’ attention and engagement requires new value creation in the publishing and content industry. It’s not easy, but publishers have the responsibility and opportunity to use technology to extend their reach as well as to explore new media and technological facets.

As I’ve said, technology isn’t going anywhere. It’s not the “enemy,” but a tool that needs to be deciphered and utilized in better and new ways. 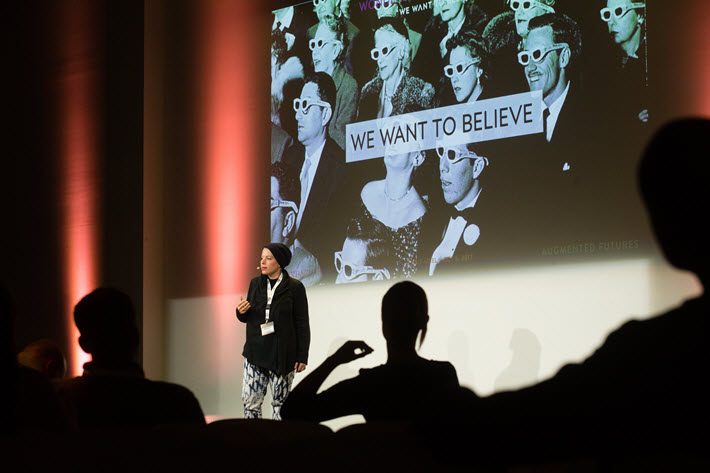 More from Publishing Perspectives on augmented reality is here, and on theFrankfurter Buchmesse is here.

It includes our extensive preview of yjr Frankfurter Buchmesse. Download the PDF here.