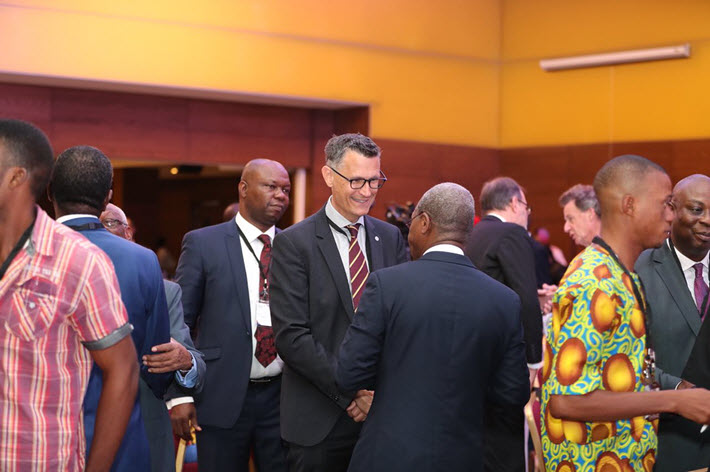 At the first IPA seminar in Nigeria on regional issues in African publishing, attendees are assured, ‘In a globalized world, almost none of our challenges exists in isolation.’ 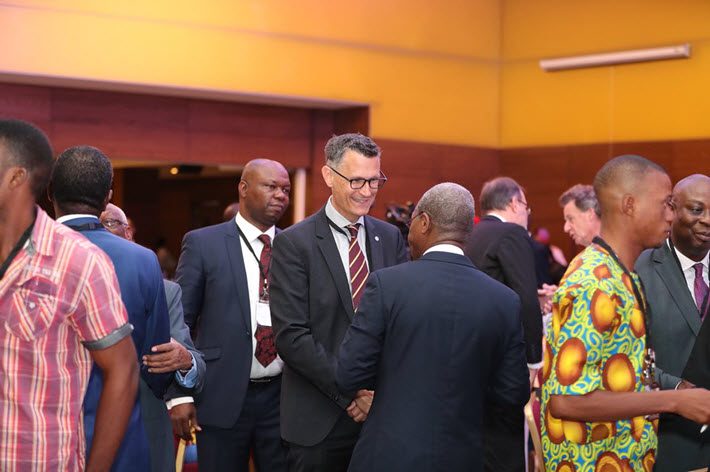 ‘A Story Under Threat’

In opening the Lagos IPA seminar on Wednesday (May 9) titled Publishing for Sustainable Development: The Role of Publishers in Africa (PDF), Gbadega Adedapo encouraged the African publishing community to look for pride in its work: “To hold its head higher,” he said, “recognize its value, and reach out to the world.”

The president of the Nigerian Publishers Association, Adedapo listed several key points, telling the audience that:

“And we simply haven’t shouted enough,” Adedapo said, “about how important publishing is to the development of all the countries that make up this great continent of ours.”

As he did in his interview with Publishing Perspectives in London prior to this week’s seminar, Adedapo went right to the issue of rampant piracy as a pivotal and urgent challenge in Africa’s markets.

“African publishing has a good story to tell,” Adedapo said in his agenda-setting opening keynote. “But it’s one that’s not being told loudly enough, and it’s a story that’s under threat.” 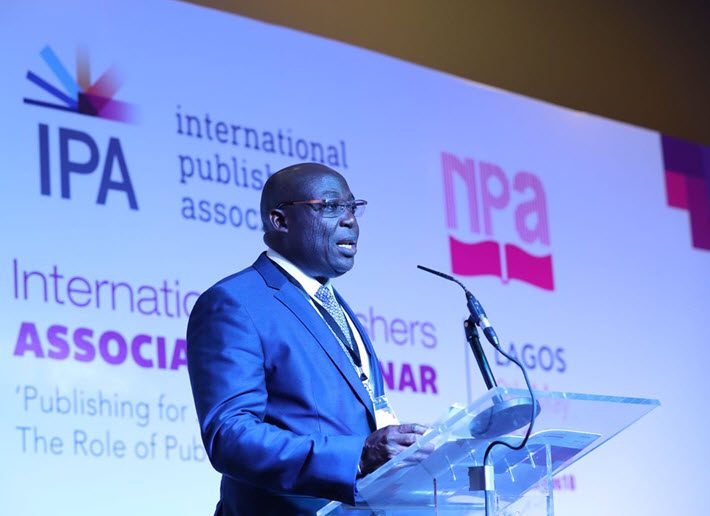 Piracy: ‘Take the Discussion to a New Level’

“Fellow booklovers,” Adedapo said to the assembly, “if we don’t tackle the scourge of piracy, then, to quote Achebe, ‘things fall apart.’ When authors’ works are unprotected, when pirated copies are everywhere, when booksellers themselves are acting as pirates, then authors do not receive royalties and publishers do not receive sales revenue.”

The daylong program ran parallel to the Nigeria International Book Fair, which continues through Saturday (May 12). 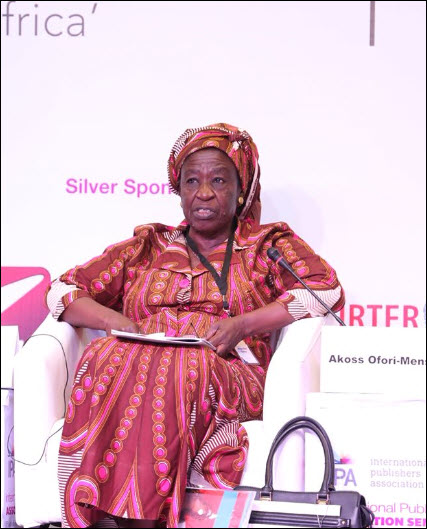 Adedapo’s reference, of course, was to Chinua Achebe’s Things Fall Apart (Penguin Random House, 2010), the speaker going on to paraphrase Yeats, as well, saying that if piracy can’t be brought under control in Africa’s markets, “The center cannot hold and anarchy is loosed upon our book world. None of us wants that and today I hope we can take the discussion of this problem to a new level.”

The level of piracy and the lengths to which it has affected Adedapo’s Nigerian market and others in Africa is compelling. Piracy, of course, is a virulent form of copyright infringement, robbing creative industries and their workers of the remuneration they deserve. While in many cases, consumer piracy can be explained, at least in part, on the naïveté of “digital means free,” the African market seems to be facing something less digital and far less innocent than might be anticipated.

What Adedapo is describing is a scenario in which physical books, both textbooks and trade releases, are copied and printed, often by printers working in league with bookstores. And one of the results is that authors have come to mistrust publishers. An author who sees his or her book selling at a store will be looking for royalties, only to be told by his or her publisher that what’s been sold was pirated copies and there’s no money for the author or the publishing house.

Adedapo, who is also an executive committee member with the International Publishers Association (IPA), is a warm, welcoming man, quick to laugh and smile—a good consensus-builder and the kind of personality who seems to be well-placed for leadership in needed regional reforms. And he made it clear in his opening remarks that the depth of the piracy dilemma in the African markets means that changing the situation is going to take some time.

“You are here at the start of what we hope will be an annual event that will be hosted by a different African city every year.” 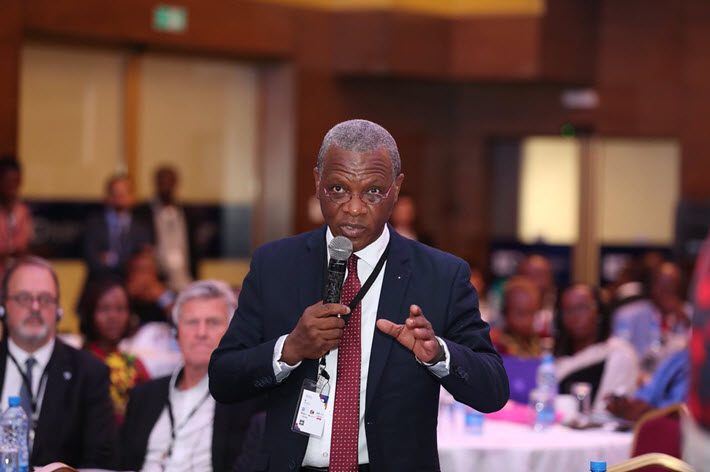 At the Lagos regional publishing seminar on May 9, Mohamed Salifou Keita, president of the Guinea Publishers Association, engages with a panel of speakers. Image: IPA

Wednesday’s seminar was a collaborative effort between of the Nigerian publishers and the Geneva-based IPA, which has 76 member-organizations from 65 nations.

And so it fell to Michiel Kolman, the IPA president, to give the second welcoming keynote. Kolman brought his energy and zeal for the mission of the association to this regional event in Africa, which was attended by a strong, highly placed delegation from the IPA.

This, of course, reflects the internationalism now driving so many factors in book publishing. As Kolman told the opening plenary session in Lagos, “In a globalized world, almost none of our challenges exists in isolation. We can all learn from each other. The challenges faced in Nigeria today may be those faced somewhere else tomorrow. And the solutions of one government may inspire another. 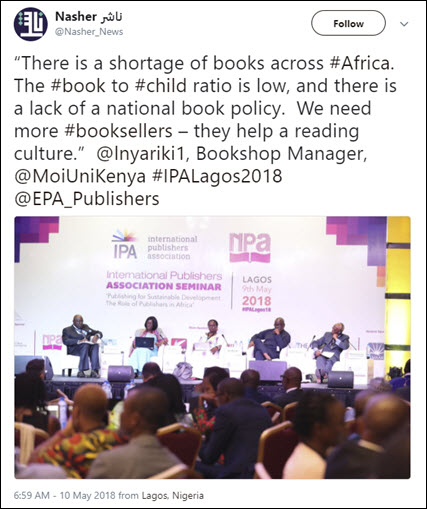 Copyright and piracy issues, for the IPA, weren’t confined to Lagos this week. Even as Kolman, Adedapo, and their IPA associates met in Nigeria, the association’s vice president, Hugo Setzer of Mexico City, had flown to Toronto and was addressing a hearing of the Canadian parliament’s Standing Committee on Industry, Science, and Technology, on what the world publishing industry sees as the catastrophic blunder of that nation’s 2012 Copyright Modernization Act and its education exception. Read more about Setzer’s comments here.

“Later this month,” Kolman said to the Lagos seminar audience, “the World Intellectual Property Organization member-states will come together in Geneva to discuss copyright, something they do twice a year. The current discussion around exceptions and limitations pits the global north against the global south in a proxy war for big tech to erode copyright.

“This development directly undermines your efforts in building a sustainable market for African publishers. That’s why I cannot emphasize more strongly the importance of a robust intellectual property regime—as well as its strict enforcement. IP laws protect the ownership of ideas, and as such provide a solid ground for research and innovation. For Africa to tap into its enormous creative and innovative potential, a dynamic and trustworthy intellectual property framework is absolutely essential.”

Kolman also widened the day’s discussions, looking beyond piracy to say, “Next to protecting copyright, one of Africa’s immediate battles is the fight against illiteracy. Success in our adult lives can often be traced back to just a few key characteristics in school. Learning to read from a young age is a crucial one.”

Now more than ever, Kolman assured the seminar’s attendees, “We see high-quality content coming from Africa, especially in the field of educational publishing.

“Publishers are aware that there are many challenges,” he said, “some of which African publishers can resolve for themselves. Others will depend on local cooperation. And some will involve international cooperation.”

Most importantly, Kolman said, the IPA seminar in Lagos was a chance for the international association’s leadership to listen, learn, and to help look for solutions.

“This seminar is about the voice of Africa,” Michiel Kolman said. “This is the voice we want to hear loud and clear today.” 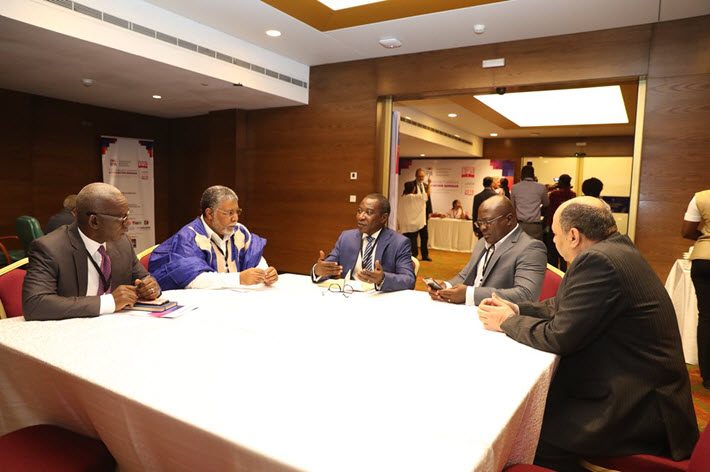 A breakout session among attendees of the Lagos IPA seminar on May 9. Image: IPA