Last year’s winner, Paul Beatty’s ‘The Sellout,’ has sold rights into 26 foreign languages, 19 of them since he won the Man Booker Prize for Fiction, say organizers. 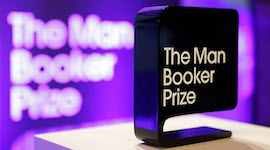 Also on the list are three first-time novelists and Arundhati Roy—her second chance at the Man Booker since she won in 1997.

Prize organizers report receiving 144 submissions of works published in the UK between October 1 last year and 30 September. First awarded in 1969, the prize is open to writers of any nationality. They must write in English and be published in the United Kingdom.

The program reports that when Paul Beatty won the 2016 prize—the first American to do so, for his The Sellout—the book’s sales increased 658 percent in the week following the announcement.

Beatty’s win didn’t come without controversy. The prize rules were changed in late 2013 to open up eligibility to writers beyond the UK and the Commonwealth, to which territories it had been limited until then.

The three authors longlisted for debut novels are Mozley for Elmet, Fridlund for History of Wolves, and Saunders for Lincoln in the Bardo. (Here’s a story from February about the making of The New York Times’ virtual-reality evocation of the Saunders piece.)

Four of the authors on this year’s longlist have previously been shorlisted: Ali Smith, Zadie Smith, Barry, and Hamid. McGregor is making his third longlist appearance.

Three independent publishers are well represented, as well: Edinburgh’s Canongate is the publisher of the McCormack book; Faber & Faber publishes the Barry and the Auster novels; Bloomsbury has published the Saunders and Shamsie books. Penguin Random House’s Hamish Hamilton is the lead publisher of longlisted titles, with four: the Hamid, the Roy, the Ali Smith and the Zadie Smith.

In a prepared statement, Young, the jury chair, is quoted, saying that the diversity of the list is particularly promising, defined by a spectrum “not only of voices and literary styles but of protagonists, too, in their culture, age, and gender.”