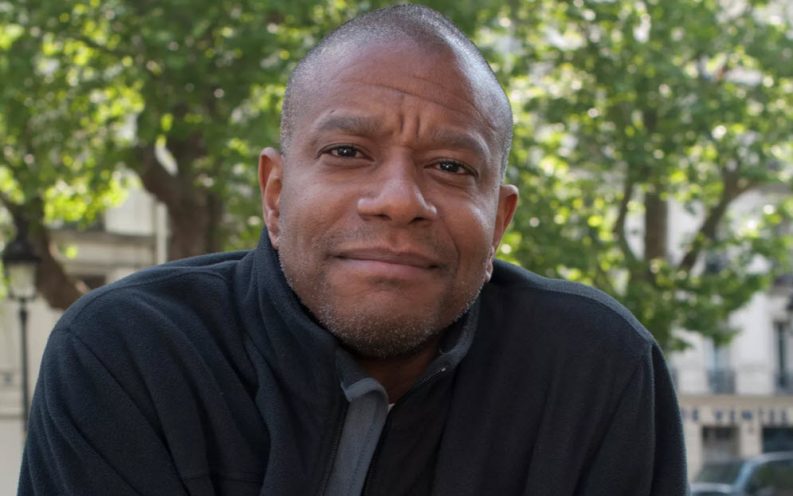 Concerning to some UK observers of the Man Booker Prize: a US author has won under eligibility changes made in 2013. Paul Beatty’s ‘The Sellout’ is a widely hailed for its satire. Quick and generous praise has followed the news from Guildhall at about 10 p.m. London time on Tuesday (October 25): Paul Beatty, 54, has become the first American author to win the UK’s coveted Man Booker Prize.

His race-relations satire The Sellout makes him what The Guardian’s Claire Armitstead is calling “an exhilarating addition to the Booker hall of heroes.” In its announcement on Tuesday evening, the Booker Prize team quotes Amanda Foreman, 2016 chair of the prize’s jury, saying, “The Sellout is a novel for our times. A tirelessly inventive modern satire, its humor disguises a radical seriousness. Paul Beatty slays sacred cows with abandon and takes aim at racial and political taboos with wit, verve and a snarl.”

Commentary to The Paris Review, Booker’s press material notes, has indicated that Beatty himself had not thought of the book as humorous, saying he was “surprised that everybody keeps calling this a comic novel… I’m not sure how I define it.”

Of note to UK readers and industry workers, Oneworld is the UK independent publisher of The Sellout. Last year’s winner, A Brief History of Seven Killings by Marlon James, was another Oneworld title. According to Man Booker’s press material, James’ book has sold more than 360,000 copies in the UK and Commonwealth, and 120,000 copies in the US, thanks to the Booker boost.

In the States, The Sellout was published in 2015 by Macmillan’s Farrar, Straus and Giroux, and described by Jesse McCarthy at The Nation as owing “a good deal of its brio to withering, painfully acute jibes at black middle-class sensibilities, foibles, and fantasies, in a manner that recalls Philip Roth’s no-holds-barred take on Jewish Weequahic in Portnoy’s Complaint.”

“This may be hard to believe, coming from a black man, but I’ve never stolen anything.”Paul Beatty, opening line, Prologue, 'The Sellout'

Paul Beatty’s win was announced by Foreman at the black-tie dinner. The New York City-based author was presented with a trophy by HRH Camilla, Duchess of Cornwall, as well as by a £50,000 check (US$60,920) from the Man Group, which has sponsored the award since 2002. An additional £2,500 goes to Beatty in shortlisting payments.

Beatty is to take part in a first public event as winner at a New Statesman-partnered event at Foyles on Friday (October 28).

The Beatty award will have come to many as a surprise, as well. As Katherine Cowdrey reported on Tuesday morning at The Bookseller, independent booksellers had seemed to support Graeme Macrae Burnet winning for His Bloody Project (Saraband/Contraband). Bookies, however, had placed best odds on Madeleine Thien’s Do Not Say We Have Nothing (Granta), which has won Canada’s Governor General’s Literary Award for English-language Fiction, also on Tuesday.

As Cowdrey writes, Beatty’s book was given 5/1 chances by bookies, while Thien’s book was favored at 7/4.

Reactions to the News

In her story for The New York Times, Alexandra Alter writes that Beatty spoke at the ceremony of the difficulty of writing the book. She quotes him saying, ““It was a hard book for me to write; I know it’s hard to read. I’m just trying to create space for myself. And hopefully that can create space for others.”

In her writeup at The Bookseller in London, Katherine Cowdrey writes about the change in the Booker Prize eligibility three years ago, which has made it possible for Beatty to win the honor: “2016 is the third year the prize has been open to writers of any nationality. Before 2014 only writers from Britain, Ireland and the Commonwealth could be entered for the prize.

“Its expansion to include all English-language authors has caused some concern that it would invite dominance from US authors and risked losing its characteristic flavour at the expense of Commonwealth authors, a point aired by Sunday Times literary editor Andrew Holgate this autumn.

“Growing up, I used to think all of black America’s problems could be solved if we only had a motto…It, like the best of African-American folklore and hairstyles, would have to be simple, yet profound.”Paul Beatty, 'The Sellout'

“The shortlist this year was split between two British, two US and two Canadian writers.”

In speaking to The Guardian’s Mark Brown, jury chair Foreman defended what some readers will find a difficult read, mixing at least three metaphors but getting across her high regard for Beatty’s work, saying, “Fiction should not be comfortable. The truth is rarely pretty and this is a book that nails the reader to the cross with cheerful abandon … that is why the novel works.

“While you’re being nailed you’re being tickled. It is highwire act which he pulls off with tremendous verve and energy and confidence. He never once lets up or pulls his punches. This is somebody writing at the top of their game.”

At Publishers Lunch, Michael Cader writes, “An emotional Beatty told the crowd at the awards ceremony, ‘I wasn’t expecting this I have to say…. I can’t tell you guys how long the journey this has been for me.”

“He added, ‘I don’t want to get all dramatic—[that] writing saved my life or anything—but writing’s given me a life.”