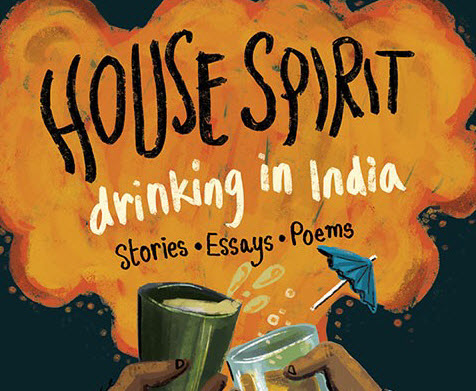 ‘People who write well and are very readable’ are featured in the new anthology, Mehrotra says, and ‘I have a reputation for drinking.’

‘All Bottled Up and Served Chilled’ In three parts (essays, poems, and stories), the book’s editor Palash Krishna Mehrotra, has come up with a book that summarizes and introduces audiences to India’s complicated and multifaceted relationship with alcohol.

Daftuar writes, “From first drinks to last ones, from dingy thekas to expensive bars, from drinking in movies to drinking at home, House Spirit becomes an opportunity for confessions and celebrations, all bottled up and served chilled.”

Daftuar interviews Mehrotra on what went into the making of the anthology. Some highlights:

Swati Daftuar: Where did the idea of the book come from?

Palash Krishna Mehrotra: Renuka Chatterjee, Speaking Tiger’s consulting editor, called me with the idea. I had done an anthology before, “Recess,” which was on 200 years of Indian school experience. And then, I have a reputation for drinking. So she asked me if I’d be interested and I said yes immediately.

SK: And in its early days, was the shape of the idea the same as what it looks like now, in the book?

Also, initially, Renuka had thought of including just fiction, but I thought having poems and essays as well as fiction would be fun, and since it’s an anthology, you can be free to do that.

SD: In terms of choosing what would make the book, were you driven by content or name? And did you have specific aspects you wanted specific authors to cover? PKM: Yes and no. An anthology is an exercise in the editor’s taste, and that goes through changes as the book shapes up. Some writers back out, so then you think of other names. And I was completely driven by the idea of including people whose writing I had read and found attractive. This gives you a lot of confidence in your writer and what he or she was going to bring to the table. So in that way I was completely name-driven rather than thinking of the content I wanted. Once the writer agreed, a lot of times they’d already have something in their head they’d want to write on. So sometimes we’d meet and discuss it further, but not always. Like with Jeet Thayil, when I approached him, he already had an excerpt from his forthcoming novel, and he asked if it works.

Essentially I didn’t ask people to write about a particular subject. I let them figure it out on their own. But then there were certain things I wanted to include in the book and I wanted certain people to write on those issues. For example, I turned to Mayank Shekhar and Sidharth Bhatia and told them what I had in mind. And then there was Abhinav Kumar, who is a policeman and he can write. I discovered him while I was keeping an eye out for people whose writing I liked and enjoyed. Including Kumar would mean having both his writing and the policeman’s perspective on board, which is what happens with his piece on thekas.

Ultimately, I wanted the book to be entertaining, informative and readable.

SD: There’s a pretty fair balance of established and new names in the book.

PKM: Yes, that was very intentional, to mix new and established names. An anthology gives you the opportunity to do this. So while there are names like Adil Jussawala and Manohar Shetty, there are also relatively new names like Mayank Tiwari and Arunabh Saikia. These aren’t people who have published books or written extensively, but who write well and are very readable. I could have easily gone to three other established names, but the choice was between having a brand-name anthology or giving people a chance and seeing how it translated. And in this case, this is what gives the book a unique flavor.